(On April 10th Argonauta Records will release the second album by Pittsburgh heavy doom rockers Molasses Barge, and this provided a good occasion for Comrade Aleks to catch up with guitarist Justin Gizzi in this exclusive NCS interview.)

As shit continues to hit the fan, it’s hard to predict what will happen next month or even next week, but a new Molasses Barge release is scheduled on the 10th of April by Argonauta Records, and I hope we’ll all be able to support it…

The band was started as a project in 2008 when a few men from the Pittsburgh heavy underground gathered in the name of the Doom Cult. Initially it was Justin Gizzi on guitars, Brian “Butch” Balich on vocals, and Wayne Massey as drummer. Justin played in bunch of bands before, and Brian is well-known as vocalist of such loud acts as Penance and Argus —  should I say that the project had great potential from the start?

However, Molasses Barge rested at pierce for years, but since 2017 they have shown good activity, recording, releasing, and performing live their hard down-tuned stuff with new members. The band’s up-to-date lineup consists of the original trio plus Amy Bianco (bass) and Barry Mull (guitars). Their new work A Grayer Dawn is damn hard and loud down-tuned doom metal, and I believe it fits well these strange times we live in. 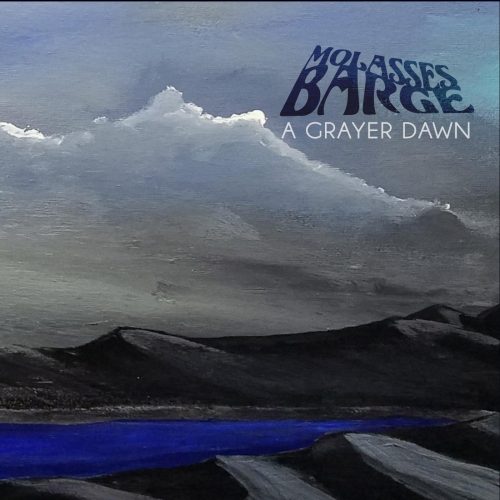 Hi Justin! As the media spread panic and the world’s economy faces new trials, what has been happening in the Molasses Barge world? Are you still focused on the forthcoming release of A Grayer Dawn?

Hi! Yes, the media, certainly television media, has a production and a tone that lends itself to a heightened level of seriousness. But, what they spread is information. It’s not always accurate, as we all know. Whether you flip out and panic, or process the information a little more rationally, and cross-reference it with other sources, is entirely up to the individual. We definitely hope that things get back on track, and we’re able to have the release on April 10th. Then, we play our release show on May 2nd, and later take part in The Maryland Doom Fest in June. Honestly, if those things don’t happen as planned, I’m ok with it. Everything else seems so unimportant compared to the life-and-death crisis we’re in the middle of right now.

I did wonder if the band’s name somehow connects with the Great Molasses Flood in Boston — can you clarify the story behind the band’s title?

It does not. Though we are aware of that event as well as a sunken molasses barge off of the coast of Florida. The name stems from right in the early days of getting things together,  and drummer Wayne wanting to have a band called “Barge”, and me liking the name “Molasses”. Neither of us went for the other’s band name individually, right off. The next day I suggested we put them together, Wayne was down, and that was it. Butch (Brian) suggested using The Molasses Barge, we may have even gone with that for a week or two, if I remember correctly.

It’s said that you, Wayne, and Brian started the band in 2008 just as a side project without intending to work at full capacity. How did it happen that Molasses Barge turned into a band with a full lineup?

In a nutshell — we were having fun and people ended up liking us. There was also a void as far as bands in Pittsburgh that were cut from the doom, stoner, or ’70s rock cloth. For a few years there was just another band called Vulture, and ourselves. So, opportunities kept presenting themselves. After a while some other bands emerged like Carousel, Fist Fight In The Parking Lot, and also Brimstone Coven from nearby Wheeling, WV.

Despite the rising level of your activity in 2017, the first album Molasses Barge was released digitally at first and was followed by Covered In Molasses, a collection of covers. How serious were you in that period considering the band’s prospects?

Those actually were simultaneously released in a physical 2-CD package and digital platforms. I’d say collectively we were realistic about everything. Despite our longevity, the band has remained a side deal for everyone. Maybe that’s helped with the longevity, too.

We did sell out of physical copies. I had some of the mixing touched up last year, and will have it remastered at some point for a reissue, but no solid plans for that just now.

How do you see the backbone of the first album? It’s so damn hard and tight piece of doom and Brian’s vocals add extra strength to this material. How much of Maryland is in you?

Well thank you. This is a long story, but to make it less long- the album was started in 2013, abandoned, and re-recorded years later. Those songs were all several years old and we were very well rehearsed, needless to say, by that point. So I think everyone was able to give a solid performance. And yes, Butch (Brian) is a powerful singer, and we’re fortunate to have him as a bandmate and friend. How much Maryland? Quite a bit. A lot of influences from there. Very lucky to have become friends with and perform for a number of those people who inspired me to write and play this particular style of music. It’s not something I take for granted.

How is important for other members lyrical themes Brian picks up for the songs? Did you discuss it with him during work over tracks?

I do all of the lyric writing for Molasses Barge myself. That was part of the deal originally with Butch coming on board. His family and work schedule permits precious little time for him to take part in projects outside of Argus, so I write lyrics and come up with phrasing/melody with his voice in mind.  I mostly write in a surreal vein, but try to not go so far out to where people can’t follow. There is one song on the new album,  ‘Black Wings Unfurl’, that Gero von Dehn wrote the lyrics to. He was my bandmate in Monolith Wielder, I poached that song when MW went on hiatus!

Did you feel you gain some recognition with the debut? It did appear almost unnoticed and the band’s facebook profile doesn’t look very active; did you work on its promotion on your own back then?

We went with a small local label at the time, and releasing in the Summer is usually not the best option, but that was the way it lined up. The release show was certainly a success and we did get some good feedback considering the limited push. Our social media activity is typically commensurate to (or parallels) our live activity. Right now, we’re awaiting the album’s 2nd single to drop in the next few weeks. In recent years, we’ve just averaged just 3-5 live shows. I was hoping for a busy Fall schedule this year, but we’re in a “wait and see” posture at the present time.

Your new album A Grayer Dawn is even harder and thicker than its predecessor but at the same time it keeps well the rocking spirit of Molasses Barge. Did you enter the studio with that kind of setting on your mind this time?

There’s probably more of a raw feel at times to this one. I didn’t layer as many guitars this time around, so the thickness is as much in the production. As far as settings, I do somewhat enjoy bleak, dark visions, blighted towns and ruins, and those sorts of things. I wasn’t really thinking of that atmosphere while in the studio, but if those images are conjured by listening to the album, good.

Where did you record this material? How was this session organized? Did you have a tight budget or did you have some time for fun?

Here in Pittsburgh at Plus/Minus Recording with Jason Jouver. No time for fun other than when Wayne tripped while getting off his seat, toppling over mics and cymbal stands, and nearly knocking down a 12ft baffle. No, it’s always fun especially working with Jason, but I did finance a lot of it myself and I made sure we kept a very tight schedule, tracking over two 10-hour work days. Dave Wheeler (Carousel/Outsideinside) guested on a track and we had a lot of fun when he came in as well.

What are main differences between A Grayer Dawn and Molasses Barge albums for you? How do you see it from inside?

A Grayer Dawn is leaner, for sure. The running time will definitely be a bit shorter. I ended up writing all of the music myself on this album, whereas the previous album had several songs co-written by early guitarist Kenny (Houser). I was a little concerned that structurally, with the way I tend to arrange, there might be too many similarities from song to song. I think the order they are in breaks it up well, though.

What would you tell about the Pittsburgh doom (or metal in general) community? Does it grant enough support to local bands? Would you tell it has its own features?

It’s pretty strong. There are more bands now in this vein, than at any previous time. Shy Kennedy (of the band Horehound) has been promoting a lot of shows, and the now yearly Descendants Of Crom festival under the Blackseed banner. Pittsburgh is a sports-first town. I mean people are die-hard fanatics here. You’ve got live music fans and doom nuts who come out, but still in a lot of ways we just have each other (speaking about the musicians who are in the bands). I’ve been playing in a multitude of bands, primarily metal, for some time now and that has been my observation for the majority of it. The musicians tend to keep each other going.

Justin, what about Urns? How is this band active nowadays?

Urns are great, thanks for asking. I play bass and do a little singing in that one. We just recorded our second album and are in the mixing phase presently. We had to cancel one show due to venues closing for a few weeks. We’re scheduled to play with Witch Mountain here in June, and I’m really hoping that still happens.

Do you stick to any plans considering the Molasses Barge activity for 2020 at the moment? Everything has changed literally in one week, and it seems no one can predict how the whole situation will inflict the music industry in a future…

It is difficult to say. I mentioned earlier I do hope things stay on, or get back on schedule. I can’t control it, so I’m already at peace with it. Just keeping the old “expect the worst, hope for the best” adage in mind, for now.