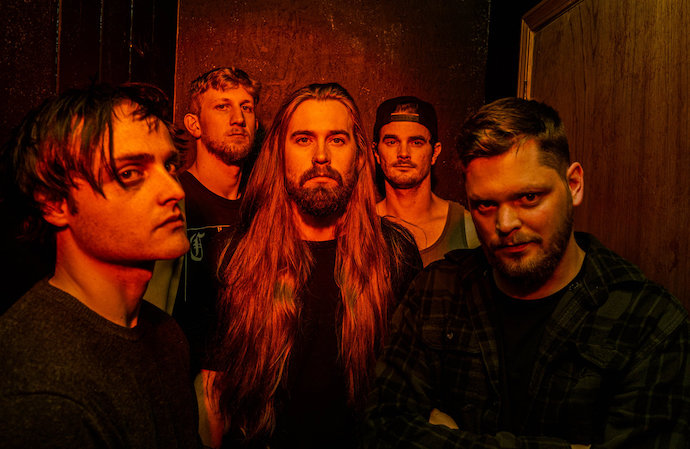 Last October Tragic Hero Records released the powerhouse third album by the North Carolina metalcore band Valleys. Aptly entitled Fearless, it represented the culmination of a process of perseverance, with themes that focused on life-changing personal struggles, as well as symbolism directed to the country’s tumultuous political climate and social unrest, inspired by a desire to speak up for the marginalized among us who can’t be heard.

Today we’re presenting a mysterious (and eventually gore-ridden) music video for one of the most explosive and head-spinning tracks on the album, a song called “Moon Child“, along with an interview of the band that focuses on that video as well as the music. 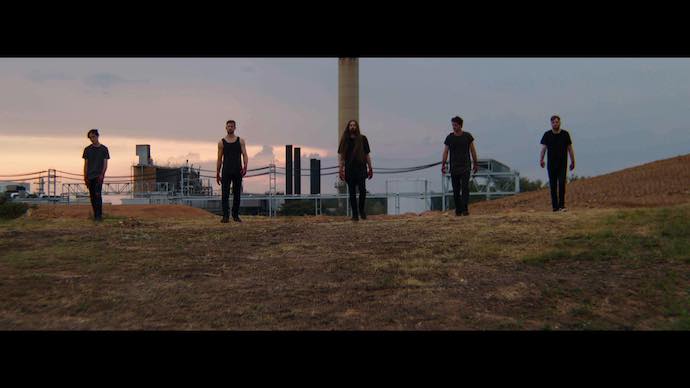 “Moon Child” is a full-throttle, emotionally splintering rager, a track that’s loaded with jolting rhythms and shrieking guitar lunacy, neck-punching drumwork and gut-gouging riffs. And the vocals are a full-bore firestorm of skin-blistering, larynx-shredding intensity.

Littered with booming percussive detonations and bursts of rapid-fire jackhammering, the track is a physically arresting (and pulverizing) experience, but as you arrive just past the mid-point, the music becomes eerily swirling and shimmering, backed by hyper-speed snare-work. The sounds glisten, soar, and become a kaleidoscope of shimmering tonalities. That provides a mesmerizing but unearthly interlude which also functions as a brief breather before the band hurl themselves again into storming the listener’s senses — and then casting us out into the cosmos at the very end.

As mentioned, the video is mysterious and unsettling, and ultimately includes scenes that people without a strong stomach probably should not watch. And it also includes film of the band throwing themselves into the performance of the song in a way that even further amplifies the music’s rocketing intensity.

As mentioned, Fearless is out now on Tragic Hero Records and can be streamed and purchased via the links below. To get some further insight into the music, the video, and what’s going on with the band now, check out our brief interview after the links. And then after that, we’ve included a full stream of Fearless.

When you guys first released “Moon Child” as a single last fall you commented that it was about millennials getting a bad rap, but “all in all, they’re absolutely terrified of failure”. And I suppose they’ve now got even more reasons to be terrified about the future. The lyrics were also described as “seeking out answers from the universe in call-and-response format”, and part of that dialogue includes this:

“Moon Child, tell me what it is you love.”

“I gave my love away,
The world took it and made hate”

The video contains a lot of mysterious imagery that begins and ends with the band members awakening with blood on their hands, and some pretty gruesome goings-on in between. Assuming these scenes are metaphorical in nature, how do they relate to the themes of the song? Or do they?

So We want to take this opportunity to say that moon child has lines that pertain to different things. The line “I feel everything, I see every movement, waisting time on a broken dream” pertains to Jayson’s own fear of failure in coming from a troubled background, he is a millennial however that doesn’t mean the song pertains to only millennials. These are common human emotions that I’m sure everyone feels or have felt at some point in life.

The line that you’ve quoted actually pertains to lost loves throughout our lives, some people move along fine yes however some people become bitter. It’s the constant tug and pull, the game if you will. You put yourself out there to others every day and so much wrong is done in response.

Emotions are like cycles, If you’re constantly wondering why you’re sad or angry or depressed then you will just feel more of that. So that’s what the video is about, being stuck in the same cycle unable to know why or dig yourself out of that hole.

I want to encourage people to come to their own conclusions about this songs meaning. What it means to us may not be what it means to you. Art is subjective after all.

The band has also been described as drawing inspiration from a need to empathize with the struggles of others, to never turn a blind eye to injustice, and to help be a voice for those whose voice can’t be heard. Are their elements of that inspiration in the video’s imagery?

Not in the video, it’s more about the cycles we all go through in life. Constantly repeating, like a personal hell.

Who came up with the conception and story-line for the video?

It was a joint effort, Jayson originally had the idea of a fortune teller and the end of the video you would find out the whole video was a vision she had as we were walking by her parlor. Obviously we didn’t go that route but we kind of tried to keep that same premise with the cycle starting over at the end.

Who filmed and directed it, and where was it filmed?

It was filmed and directed by Justin Reich in Winston Salem NC, an old tobacco warehouse I think.

By the way, what is the “Moon Child” in the song’s title, and how did you come to choose that name?

“Moon Child” refers to a person who feels their emotions intensely. It is associated with the zodiac cancer.

Before we go, what can you tell us about how the band is getting through these virus times, and about your plans for the future?

Dude we’re writing new music!
Hopefully this subsides soon and we can make some plans as far as touring goes. Best wishes to everyone who’s gigs were cut short due to this pandemic.