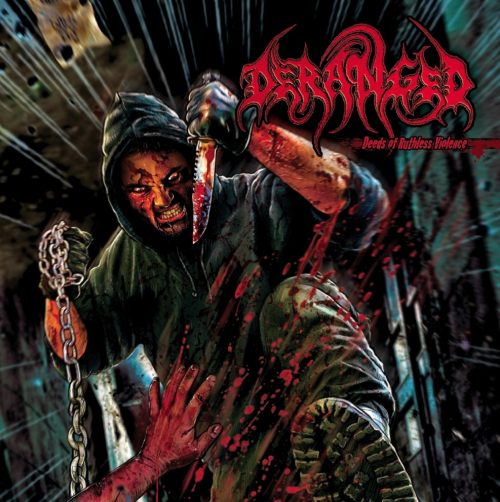 (Here’s Vonlughlio’s review and recommendation of the new album by the Swedish death metal band Deranged, who began life in 1991, and whose latest full-length is out now via Agonia Records.)

I am now here to write about a band I have been a fan of since the late ’90s and believe have always been consistent in their vision of BDM over the years. That band is Sweden’s Deranged and they just released Deeds of Ruthless Violence on March 27th via Agonia Records.

This is one band whose music I have enjoyed and still ask myself why it does not have the recognition it should. I mean, sure, they have fans around the world and are well-respected but I wish more for this project. They have been consistent with their art and vision and have released music that has transcended the test of time. 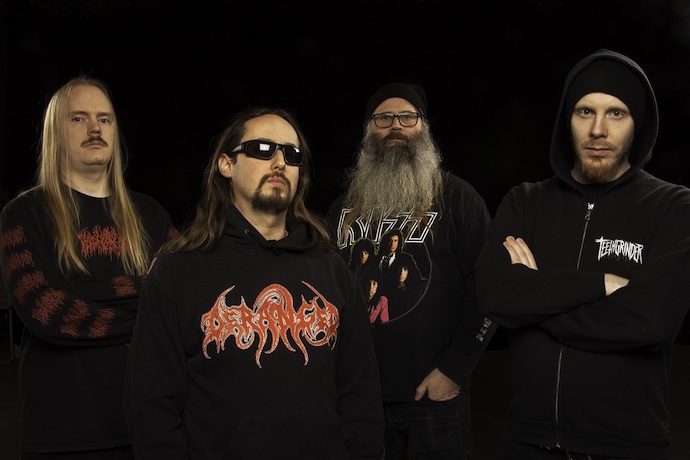 One aspect that I must mention first about their discography is that their whole theme is amazing — all of the gore, blood, killing, torture, all the good stuff. Each album feels like a horror movie, and the Director is Mr. Wemen (drummer, and one of the founding members), the man with a vision and the passion to deliver the stories in each of their chapters.

So they finally released their new album, and I am liking it more than 2016’s Struck by a Murderous Siege. Don’t get me wrong, I like that album, but production-wise Deeds of Ruthless Violence is way better and gives more depth, and the songs are an improvement in their structures. It somehow reminded me of their 2002 album Plainfield Cemetery, one of my top 3 releases from them.  The songs are straightforward and full-of-rage, hate, and furious energy, which makes you want to scream your lungs out.

The guitars and bass are vicious in each of 8 tracks on this new endeavor, powerful forces that drive the sound in the direction we enjoy, and full of blast-beats that give life to the songs and were handled with extreme precision. The vocals are great and are a perfect fit with the music, giving the full feeling to the the lyrics.  The group of musicians have already proven their talent, and it shows again here. They know what they wanted and the end result is vividly representative of the vision this band is known for.

The project is something that I enjoy a lot, and as mentioned earlier, I wish they would get more recognition for their hard work throughout the years.  Always consistent, maintaining their vision, and being true to themselves. So if you have a chance, stream below the new release from the label’s Bandcamp page: