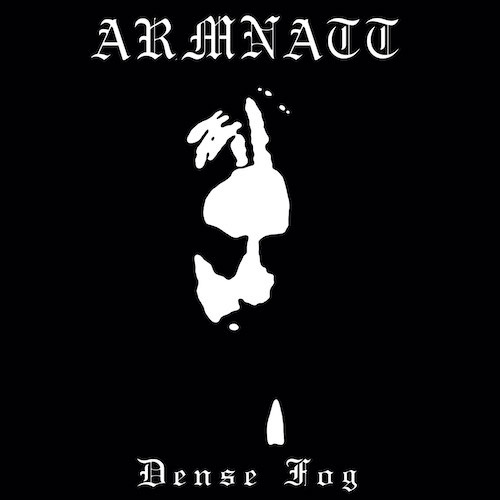 Like a lusting vampyric demon stinking of sulphur and hungry for innocent flesh, the Portuguese black metal band Armnatt have stoked their hate, strengthened their poisonous spells, and risen again from their catacombs with a second album, six years after their Darkness Times debut. This new one, Dense Fog, will be released on May 1st by Signal Rex, and today we premiere the title track.

As manifested through this new album, Armnatt have created music that is stripped-down, raw, and carnal, as well as supernatural, deeply sinister, and perversely seductive, its cruelty matched by its chilling charisma.

In the title track, a swinging drum cadence and a pounding bass line anchors raw and ravaging strummed chords with a grim and dismal tone, pierced by tortured screams. Armnatt have a penchant for shifting their rhythms and riffing styles back and forth, and so the drums eventually erupt into a battering race and the riffing becomes maniacal and exultant, rising in a display of vicious fieriness as the vocals flood the eardrums with blood spray and acid.

The whirling madness of the riffing switches into slashing chords as the drumming moves into a head-moving, punk-like cadence, but the music returns again into the knife-edged swirl of tremolo’d mayhem and clattering drum blows.

The previously released song “Circumscribing the Circle“, which you can also hear through the player below, continues Armnatt‘s demonic revels, again wielding a mix of dense riff swarms and slashing strummed chords, of vivid drum hammering mixed with bounding rhythms, and of course those throat-ripping screams.

Dense Fog presents 10 tracks in 27 minutes, and Signal Rex will release it on on CD, vinyl LP, and cassette tape formats. In conjunction with that, Signal Rex will also release the Armnatt debut album Darkness Times on vinyl for the first time.