(Here’s Andy Synn‘s review of the anxiously awaited debut album by the German/Austrian/Belgian band Lebenssucht, which was released on April 7th through Thanatoskult.)

I don’t have kids (nor do I want them) but I have to imagine that the feeling I get watching certain bands develop is the same one which a proud parent must get when watching their child first learn to walk, or talk… or give up their dreams and settle into a life of soul-crushing drudgery.

Ok, maybe it’s not exactly the same, but it’s definitely rewarding to see bands you’re invested in, particularly ones you’ve been following since their very beginning, living up to their potential.

Case in point, multinational Black Metal collective Lebenssucht, who I/we have been following at NCS since their debut EP, Fucking my Knife, have finally released their first full-length album this week, and it’s one hell of a ride. 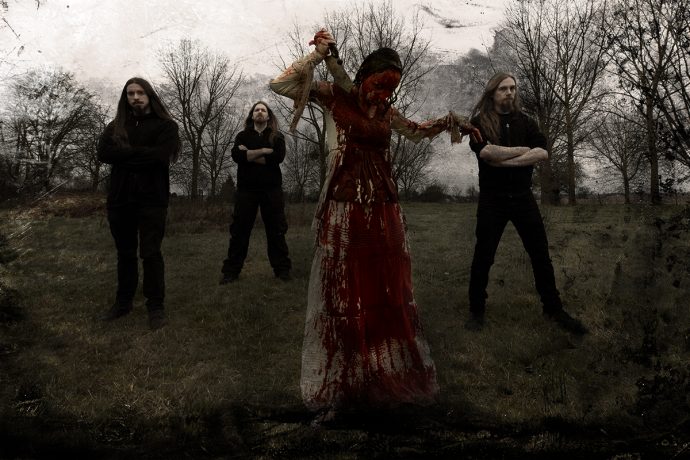 While the German/Austrian/Belgian crew are often (and not necessarily erroneously) tagged as DSBM (that’s “Depressive Suicidal Black Metal” for you lay people), it should be immediately apparent, after just one listen to opener “Trauerweide”, that Lebenssucht definitely favour explosive acts of self-mutilating catharsis over morbid, navel-gazing nihilism.

And while there are certain, undeniable, similarities to Shining and/or Silencer at their most aggressive, the band’s mix of frenzied, blast-fuelled percussion and tangled, torrential guitar work also recalls the weighty assault of Belgian blasphemers Enthroned, delivering a devastating deluge of heaviness and intensity which frequently borders on the inhuman(e).

That’s not to says that -237,15°C is a one-note, one-dimensional album by any means, as while songs like the aforementioned “Trauerweide” and the aptly-named “Moment of Violence” are as visceral, as venomous, and, yes, as violent as they come – far more so than your average DSBM record – there’s also a moody undercurrent of menace and malice running through this album which allows for an even darker dynamic and a greater sense of sinister atmosphere.

This is particularly apparent during tracks such as “A Hole In My Heart” and “Nullpunkt”, where the band expand their creative palette into multiple, even bleaker, shades of black, adding several layers of eerie minimalism and/or doom-laden darkness to their abrasive, anguished assault on the senses.

What really puts -237,15°C over the top, however, is the utterly uncompromising, almost unhinged, vocal performance of S Caedes who, aided and abetted by some similarly caustic backing vocals from the rest of the band – especially during shrieking, snarling, stand-out “Mirrors” – slathers every single song in pure emotional extremity.

It’s not a perfect release by any means (the closing title-track, for example, ends things not with a bang but a whimper), but even it’s occasional flaws simply serve to make you appreciate how good -237,15°C really is, especially for a first album.

So the next time you’re in the mood for something really nasty, something raw and ravenous and utterly unrelenting, give this one a spin… and don’t stop until it really starts to hurt…