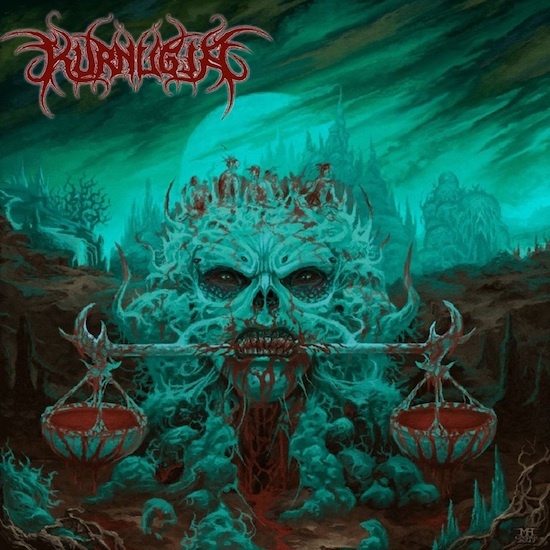 Hell of an album cover, isn’t it? Kudos to Mark Cooper (Mindrape Art) for that. And kudos to Kurnugia for making the kind of music that merits such ghastly supernatural visuals. “Evil, rotting and heinous death metal” is how the Memento Mori label’s publicist describes this Cleveland band’s new album, Forlorn and Forsaken, and that’s a dead-on description.

If you were to see those PR materials, you would also find references to the legendary names of Immolation, Grave, Incantation, Autopsy, Entombed, Cianide, Morbid Angel, Dismember, Death, Unleashed, Deicide, and Benediction. A big list, to be sure, and also an appropriate one, because the veteran line-up of Kurnugia not only relish the formative sounds of those groups in the early ’90s, but also have a remarkable talent for allowing this range of foundational influences to flourish in their music in ways that would make all those bands damned proud — as you’ll see when you listen to “Pervert the Pious“, the absolutely electrifying song we’re premiering today. 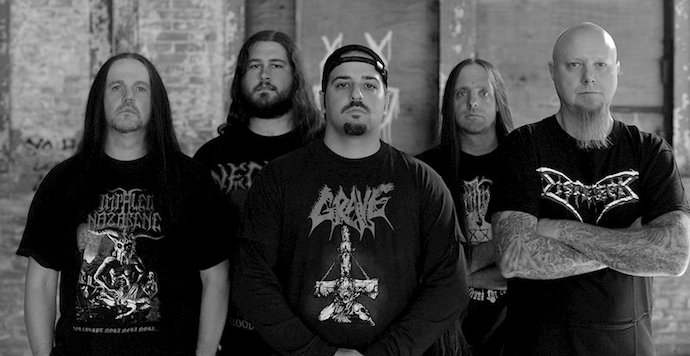 Kurnugia was founded by ex-members of Decrepit, Nunslaughter, Embalmer, December Wolves, and Delusion. They began devoting their talents to the fashioning of Kurnugia‘s gruesome and devastating sounds through two EPs, Tribulations of the Abyss in 2013 and then Condemned to Obscurity in 2016. That prepared them to unleash hell in full-length form on this debut album.

What’s immensely satisfying if you’re a fan of death metal that stays true to its roots is how marvelously Kurnugia manage to harness different tropes and sensations within the space of a single song. “Pervert the Pious” is a perfect example of that. The music continually changes, shifting tempos and riffs with seeming abandon, but everything integrated through astute songwriting chops. And the overall impact is a barbaric thrillride that’s going to leave a lot of metal die-hards with big evil grins.

Not to try to completely map the course of the song, but it’s mid-paced and writhing, heavy and booming, bone-smashing and gut-gouging, and completely berserk. It includes the kind of maddened riff swarms that make you think of something nasty and starved that’s ripping and feeding, and the kind of guttural growls and lunatic howls that conjure images of unchained demon beasts. There are bursts of obliterating drumwork and maniacal fretwork, of rampant galloping rhythms and gruesome eviscerating riffage that mercilessly drills through bone, of jackhammering percussion and twisted flickering leads. There are dirge-like crawls and mewling melodies that bespeak disease and no hope of survival, plus a flame-spewing, shrieking, spiraling, and swirling solo that’s sheer madness.

You get the idea? There’s a helluva lot going on in the track, but it all hangs together, and on top of everything else it’s insidiously contagious. Even better, if you dig this track you’re going to revel in the album as a whole.

Memento Mori will be giving Forlorn and Forsaken a CD release on April 27th. Watch the following spaces for further info about how to grab a copy — and don’t go away after you listen to the track we’re premiering, because just below it you’ll find a stream of the album’s first two singles, “To the Cursed Depths” and “Eroded Faith“.

2 Responses to “AN NCS PREMIERE: KURNUGIA — “PERVERT THE PIOUS””