(Here’s Andy Synn‘s review of the debut album by Colorado’s Black Curse, which was recently released by Sepulchral Voice.)

And, you know what? He’s right. If your album has four or five moments, four or five songs, which truly stand out, and stand the test of time, then you’re probably good.

The thing is, really great albums, albums like Endless Wound, don’t just settle for four or five moments per record, they offer up four or five of these moments in practically every song! 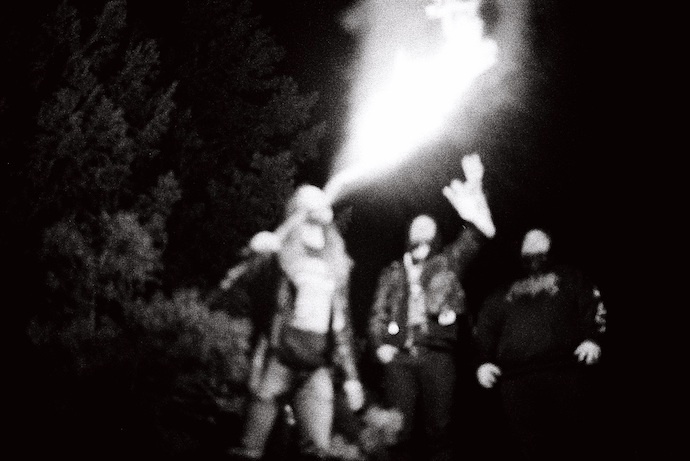 Take opener “Charnel Rift”, for example. It’s got an explosive, blast-fuelled opening, a short, slinky little bass break (leading into a beautifully grim and groovy riff), a doom-tinged mid-section which is accompanied by a mind-warping solo, and then a big penultimate riff-gasm which features yet another devilish, divebombing solo. And all in the space of just over five minutes!

Then there’s the more expansive and extravagant “Enraptured By Decay”, with its ginormous, rolling riffs, passages of quiet, anxiety-riddled tension, humongous, doomy chords, weird, pseudo-melodic lead-layers, and brooding, bass-led finale, each of which would be more than enough to make the song stand out on their own but which, when taken together, make it utterly unforgettable.

Or perhaps you might want to take the absolutely stunning title-track for a spin, with its opening squall of primal chaos, its rapid-fire riffs and whiplash-inducing stops, its eerie, ominous mid-section and riveting, arrhythmia-inciting drum patterns, and its hellishly hooky, absolutely crushing climax?

Heck, even when the band don’t have time to fit in those requisite “four or five moments” — as on the short, but insufferably savage, “Seared Eyes” — they more than make up for it in sheer intensity and pure, unadulterated riff-craft.

Of course, no-one is claiming that Black Curse are a wholly original proposition by any means, and the band themselves fully admit that their entire sound – equal parts Sarcófago and Slayer, Mayhem and Morbid Angel, Impiety and Incantation – purposefully harkens back to the primordial days of Extreme Metal, when the genre’s progenitors were all still exploring and experimenting with the best way(s) to inject their music with the maximum amount of “evil”.

What makes Endless Wound work, however, is that it’s not just about imitating bigger, better bands, or pandering to naked nostalgia without any substance to back it up.

Instead it’s about channelling a sound, a style, an aesthetic, which allows the band to achieve their own vision, and to maximise their own potential.

Yes, it’s a throwback, but it’s one with purpose, and ambition, beyond simply replicating and repeating exactly what’s gone before.

Now, you’ll have noticed that I haven’t said anything yet about the band’s various members, who also ply their trade in groups like Khemmis, Blood Incantation, Spectral Voice, and Primitive Man, and the reason for this is simple – it’s not important.

Don’t get me wrong, the quartet are all clearly talented, and their musical pedigree is never in any doubt, but Black Curse is just as clearly its own entity, and deserves to be treated as such.

Ultimately there are a handful of bands out there who, for my money, do this hybrid of Death/Black/Thrash Metal just that little bit better than the rest. Teitanblood, Vassafor, Valdur… I’m sure you all know know who I’m talking about (and have your own names to add too).

Well, consider Black Curse to be the newest addition to this particular list, as Endless Wound is undoubtedly one of the finest, foulest, most ferocious debuts of 2020.