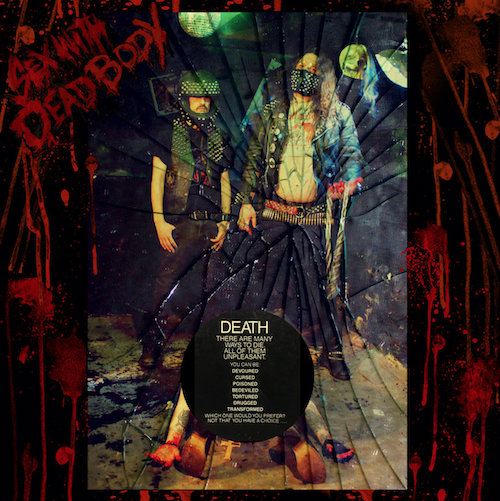 Some people who just landed on this page will already know something about the music of Shitfucker and will stay to listen to their new album, which we’re streaming in full today. Others who are ignorant of the music are probably outraged and about to leave after a quick glance at the name of the band and the title of the album — and they haven’t even seen the rest of the band photos. So I’m thinking I better get to the music fast.

What Sex With Dead Body will give you, at least right after the intro track, is admittedly carnal and filthy, but it’s also packed with skull-thumping beats, bone-moving and bowel-churning bass, head-hooking riffs, and exhilarating (though demented) soloing. And really foul and depraved vocals. And more variety in the song-writing than you might expect. 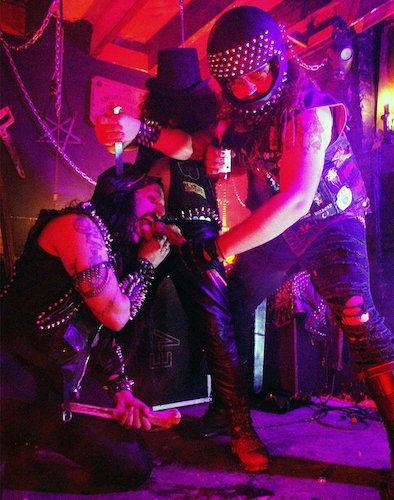 The third track, “Ricky’s Dead”, is a good example. Coming right on the heels of the pulse-punching, swirled-riff, musical aphrodisiac of “Stab the Head’, the song begins in eerie, haunting, ominous,  fashion, a poisonous and dismal march — which then kicks into rollicking high gear, the snare snapping your neck, the fuzzed-out riffing laced with lust, the vocals nasty as a priapic demon. And if it don’t get your toe tapping and your head moving like a piston, something’s wrong.

But that’s just one sign of how Shitfucker switch things up within these ten tracks, and how naturally they stitch together their favored genre ingredients, which include black/thrash, hardcore punk (“mainlining G.I.S.M. and the Japanese Ghoul“, as the PR material says), and the devilish flavorings of early Bathory and Sodom. Check out the anthemic stylings of “Leather Lady Lover” for further signs of the album’s mining of metal and rock traditions from the ’80s, as well as the judicious but very effective use of vibrato clean singing, or the deranged and discordant punk mayhem of “Skitzoid” and its doses of mutilating guitar torture.

For sure, the album is often as nasty as syphilis, and includes big doses of lascivious sleaze (“Divinating Death”, for example), but Shitfucker know how to kick your bloodstream screaming into overdrive (“Splatter Master”). And as you’ll figure out long before you get to the penultimate track (“Touch Me I’ll Scream”), but will be reminded again there, they also know how to punch the buttons in your reptile brain and just rock out, even if it also makes you feel like someone slipped a hallucinogen into your whisky shot. 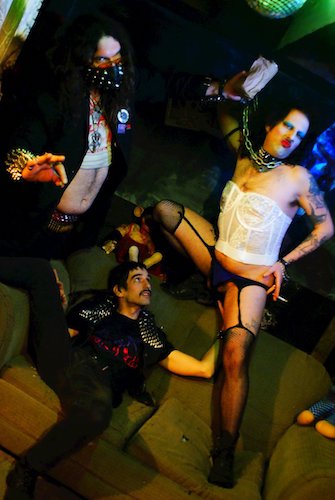 Those of you who weren’t already fans of Shitfucker and rolled your eyes at the band name, the album title, and the photos, may not be convinced by the preceding verbiage to give the music a spin. But hopefully others will now be ready to dive in, and maybe even licking your chops at the idea.

By the way, Shitfucker are from Detroit, and this is their second album, coming a long six-plus years after the first one (Suck Cocks In Hell), with some splits in between. It includes re-recorded versions of the four songs on the band’s Ricky’s Dead demo. It will be released by Hells Headbangers on April 20th, on CD, LP, and tape.

And hell, you’re probably already stocked up on latex or nitrile exam gloves, so you don’t have to worry about handling the physical editions after you unwrap the packaging.

6 Responses to “AN NCS ALBUM PREMIERE (AND A REVIEW): SHITFUCKER — “SEX WITH DEAD BODY””