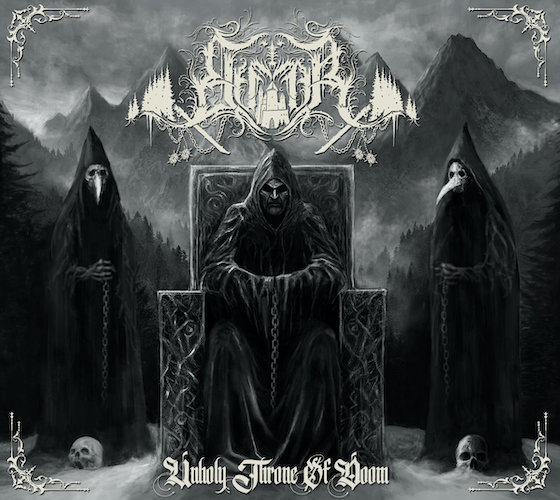 I’ve packed a lot of music into this Sunday’s column — four complete albums or EPs, as well as an advance track from a forthcoming record and a demo single. It’s all so new that I haven’t spent much time with the music, and am therefore probably not in the best position to give it well-considered opinions. But the first impressions have been so exciting that I didn’t want to wait. Not for the first time, impulse has again ruled this day.

Because there’s so much music here, I divided the column into two Parts. Part 1 is devoted to two full-length albums.

Unholy Throne of Doom is the latest album by this band from the Basque Country, which began long ago as the solo project of Eöl but seems to have fleshed out into a full line-up, with one of the members performing tambourine, flute, and a traditional Basque instrument called the Alboka. Released on April 22nd, the album consists of four tracks, each of them in the range of ten to thirteen minutes. 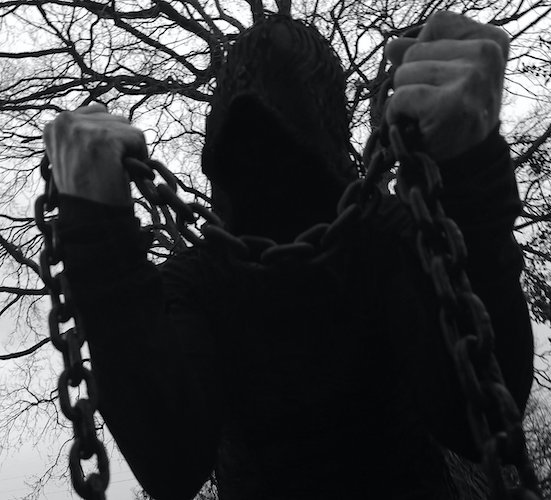 The traditional instruments noted above play useful (though limited) roles, but don’t think of this as rustic, folkloric black metal. Instead, the music has an epic sweep and operates on a grand scale, strong hints of which come right away, in the orchestral prologue to the opener, “March of the Dead Souls“. The elements of dungeon synth in the music are pronounced, and provide a mystical and mythic overlay, but beneath those fantastical, panoramic tones the riffing is lo-fi and abrasive, as are the demonically possessed vocals, and the main line of the drumming is blasting at maniacal speeds.

The combination of sweeping and scintillating ethereal melody, raw-black-metal aggression, and tortured vocal extremity creates an interesting amalgam of disparate sensations, of celestial wonder and unhinged savagery. The synths play the dominant role in changing the moods of the music, and the moods do change, creating atmospheres of mystery and magic or falling into melancholy and anguish, but the dominant impression the synth layers leave is still one of unearthly spectacle, and the songs end with ambient outros that seem like voyages into the cosmos.

There are a few surprises along the way, such as the sinister raking riff, backed by a rocking beat, that unexpectedly arrives in “Old Wizards Cavern” as the synth vanishes (that song also includes a beguiling flute melody). And in the menacingly intense and gloriously soaring closing song, “Kaosaren Profezia“, which is probably the best and most exciting of the four, we finally get to hear the Alboka (or at least I assume it’s responsible for the wild, bagpipe-like sounds that arrive at the 5:50 mark), as well as solemn vocal pronouncements and thrilling symphonic orchestration.

The impressive cover art was made by Igor Mugerza. I’m thankful to Miloš for leading me to the album. 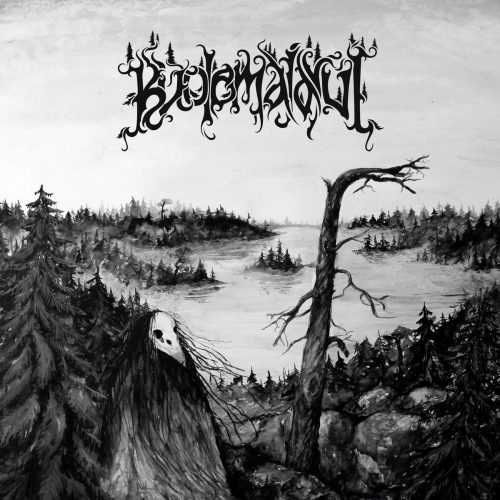 Kuolemajärvi hail from the Republic of Karelia in the northwest of Russia, on the border with Finland. Their self-titled album was released on April 24 by Der Schwarze Tod.

I got sucked into the album immediately by the raw, piercing riff that opens the record, backed by a spine-popping drum beat. With that carnal sound as the anchor, the band then suddenly layer in the slow-moving shadows of mind-immersing synths, wailing, spectral guitar leads, and grotesquely distorted vocal terrors. The music has an undeniably depressive aura, but is electrifying at the same time — particularly those shrill, wailing leads and that gut-gouging main riff.

Like the music of Elffor above, that opening track juxtaposes divergent sounds in a way that’s arresting. And other riveting juxtapositions lie ahead. The vibrant pulsating bass tones and the searing and glimmering swaths of sound that surround them in “II“, combined with a different kind of wailing melody with a fascinating tone, makes that song as riveting as the first one. It too has a sorrowful atmosphere, but somehow a romantic and yearning one as well.

I’m going to resist the temptation to continue commenting track-by-track. I’ll just say that the remainder of the album continues to practice a beguiling blend of physically compulsive beats, usually (but not always) of the kind that make you want to bob and bounce, cascading waves of gleaming surround-sound, shrill and searing leads, and an array of harsh and harrowing vocal mutilations. And I’ll repeat that there is something romantic about the atmosphere of the music, combined with dark moods of melancholy, anguish, and desolation.

I’ll also add that the long fifth track, which slows the pace, is absolutely enthralling even though it’s the darkest and most emotionally devastating of the songs, and the album closer is a trippy-as-hell electronic composition (with maybe a bit of moody strumming in the far distance).

In reflecting back on the album I thought of a melding of black metal, shoegaze, and synthwave, but am not sure that’s quite right. Whatever you want to call it, it’s an inventive and adventurous trip that really bears close attention from beginning to end.

One Response to “SHADES OF BLACK (PART 1): ELFFOR AND KUOLEMAJÄRVI”