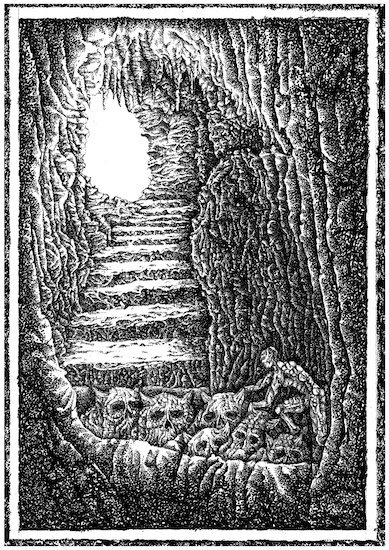 Hinterkaifeck‘s first release, a 2019 Live Promo Tape, drew significant attention in the most diseased bowels of the underground, perhaps especially because it was such a completely unhinged and so thoroughly abrasive assault on the senses that it left deep scars on the mind. As a sonic manifestation of maniacal depravity and plague-stricken degradation, it was a horrifying scourge, but one that managed to connect powerfully to the primitive flight-or-fight instincts of those who survived the running of its gauntlet.

It also had a potent cathartic effect, operating as a toxin that both sounded like, and provoked, a vomiting up of furious frustration, bitter bile, and venomous hate. That struck a chord, and struck it hard enough and widely enough that the first press of that live promo tape quickly sold out, and those copies have since then been eating their way through whatever structures tried to hold them in our squalid abodes, like the acid blood spilled by the xenomorph of Alien fame.

The news that this black metal duo from Brisbane, Australia, would be releasing a follow-on release was thus met, at least in these quarters, with a mixture of fear, disgust, and hunger. The second demo, named Kak, will be released on May 8th by Nihilistic Noise Propaganda. Today we’re joining with Cvlt Nation in helping spread the word by presenting one of the four new tracks, “Incorrigible“, which is plainly what Hinterkaifeck are. 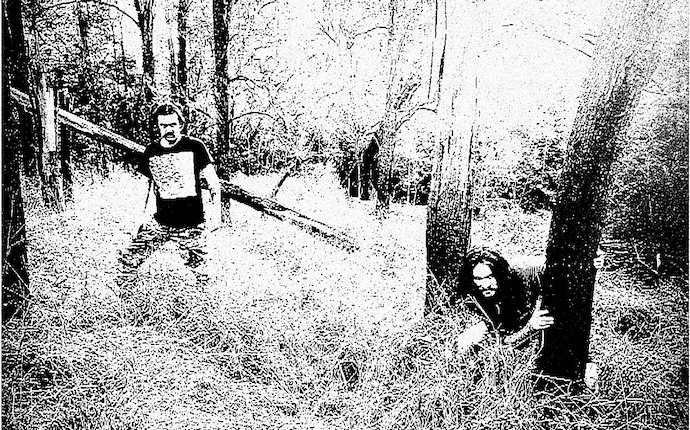 The new demo reveals that, in their fundamentals, Hinterkaifeck have not cleaned up their act. They tell us that they recorded it “in a dingy loungeroom with little money and gear during this Covid panic”. And the music still sounds unrepentantly and unforgivingly raw, though maybe slightly more defined in its ingredients and with more nuance and greater dynamism in its movements. And the new promo is also still a jaw-dropping barrage of sound, though even more effective in harnessing the listener’s reptile brain and lashing it into a thrilling ride.

“Incorrigible” greets vulnerable ears with a raw and ravaging miasma of poisonous, frenzied riffage that becomes a pulsating mass and then a swarming feeding frenzy. That’s backed by drum beats that clatter and batter in strikingly vivid fashion, going off in explosive bursts inside your skull, and also connecting into galloping cadences and jet-fueled blasting that gets the pulse racing.

But the riotous energy of the music also suddenly diminishes, the riffing devolving into a dismal, corrosive, stabbing sound, like gore-caked axes falling on corpses, and boiling like toxic vats of radioactive viscera, while the drums methodically pop and snap. The drumming is still accented by unpredictable speedy bursts until they lock into a skull-snapping beat as the riffing grows more gruesomely incensed. The drumming continues to morph until, at the end, the afterburners kick in, a fine match for the suddenly maniacal spasms of the guitar. And through all these ugly but electrifying transformations, the screeching vocals channel goblin lunacy. 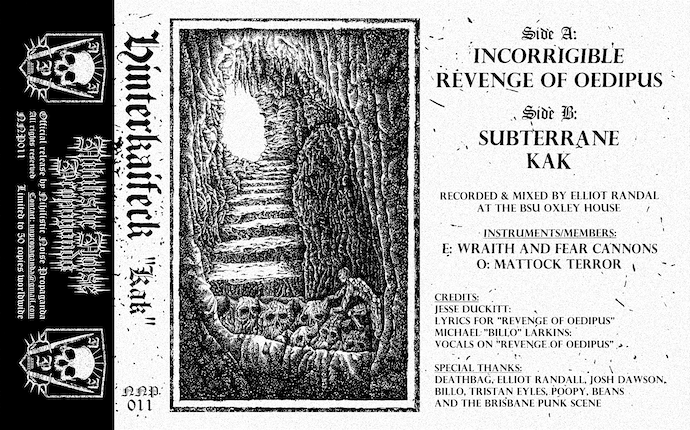 It’s not at all clear that Hinterkaifeck needed any help spreading the word about Kak — we got word that the first pressing of tapes sold out days before this scheduled premiere, and of course many more days before the slated May 8 release. But take heart, more copies will be coming.

One Response to “AN NCS PREMIERE: HINTERKAIFECK — “INCORRIGIBLE””