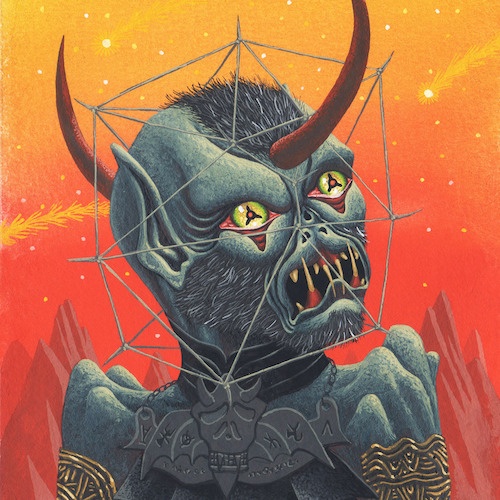 The mysterious French black metal entity Esoctrilihum, whose sole member goes by the name Asthâghul, has been prolific by common standards, releasing four albums from 2017 through 2019, and with a fifth one now due for arrival in this plague year of 2020. And yet listening to these albums reveals continual change. Rather than conscious exploration or experimentation, the albums seem more likely to be a reflection of the creator’s mental and emotional states as they existed at each moment, and the inspirations and impulses that then flowered. But regardless of the explanation, listening to the evolution across the course of these records has been fascinating.

The new album, Eternity of Shaog, is no less fascinating than its predecessors. It represents a distinct entity with its own atmosphere, and more pronounced melodic elements, presented through violins, piano, kantele, and synths. In its many accomplishments, it reaches a creative zenith in Esoctrilihum’s recordings — but only so far, because this project can’t help but foster increasing intrigue and increasingly elevated expectations, rather than any surmise that the next release will be “more of the same”.

With two pre-release tracks out in the world already, we are now in the fortunate position of adding to those insights about the music by presenting today the title track in advance of the album’s release by I, Voidhanger Records on May 22nd. 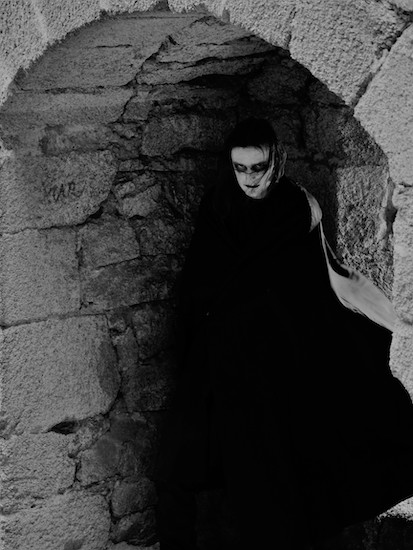 Among the fascinations of Asthâghul’s creations are the conceptual underpinnings of the music. Concerning the new album, we’ll share this explanation furnished by I, Voidhanger:

The concept behind Eternity Of Shaog is one of psychic transmutation and demonic possession, and further explores the ill worlds of the immemorial gods to form a diptych with the previous album. Through a series of songs/gateways, the listeners are conducted in front of Shaog Og Magthoth, the most unfathomable among the Sovereigns of Nothingness, introduced by ESOCTRILIHUM on the Pandemorthium album and reminiscent of Lovecraft’s Ancient Ones.

In the context of this fantastic, elusive lore imagined by Asthâghul, Shaog is an omnipotent god living an endless and solitary existence outside of time and space; a hungry wild beast from a nightmarish dimension watching us with gnashing teeth, like the space vampire on Alan Brown‘s mind-blowing cover painting. Shaog resides at the centre of an empty, dead universe, imprisoned in a cage of monotonous desperation from which he tries to escape by possessing the unsuspecting voyager who ventures into his world of ruins through dreams…

On closer inspection, Shaog is nothing but our evil self from the other side of the mirror, a metaphor for both the insanity hiding in man and the solitude of the artist. And of Asthâghul in particular: like an involuntary medium, he “receives” the blackened death metal music of ESOCTRILIHUM from unspeakable forces lurking in the dark corners of his mind, negative energies that leak out from its cracks and drip onto our reality.

The complete name of the song we’re presenting today is “Eternity of Shaog (∞th Passage ◆ Grave Of Agony)“. It is the penultimate track on the album and follows seven preceding passages and the introductory track “Orthal”, all of which together (in French as well as English) recount a truly terrifying tale of madness, despair, the possession of horrifying powers, the opening of interstellar doors to etheric astral matter, and the infliction of nightmarish atrocities.

In the music, there is, in the vibrating guitars and the rhythmic pounding, something like the sound of a fiery and feverish dance, a kind of mad ecstasy that soon comes to resonate in tones of cruelty and rage as the cracked snarls of the vocals turn to abyssal roars and the drums detonate like bombs.

The music continues to morph with abandon, incorporating vibrant thrashing chords (red meat for a headbanger), ethereal swirling leads, onslaughts of writhing and ravaging chaos, and episodes of trilling melody that generate a feeling of melancholy in mesmerizing fashion. All in all, it’s a frightening yet fascinating experience, otherworldly in its atmosphere yet with very human emotions wrapped within that pan-dimensional fabric.

As noted earlier, the frightening cover art for the album was created by Alan E. Brown (Medusawolf), and its name is “The Dracula of Mars”. I, Voidhanger will release the album on 2×12″LP vinyl in a Gatefold Sleeve, limited to 300 editions (100 Transparent Orange/Red, 200 Black), as well as in an A5-Digipack CD edition, and digitally. I, Voidhanger recommends the album for fans of Leviathan, Inquisition, The Ruins of Beverast, and Blut Aus Nord.

Below you’ll find pre-order links, the track list, and streams of the other two three songs released so far. 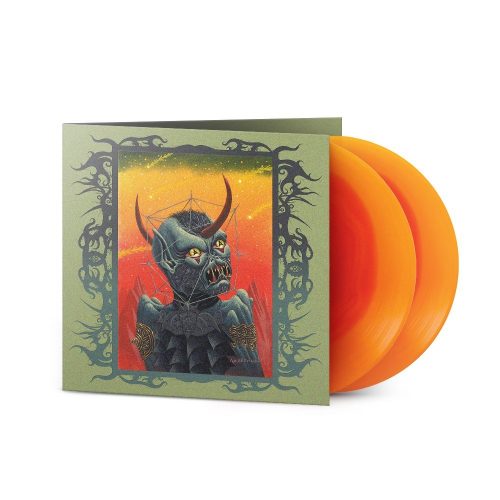