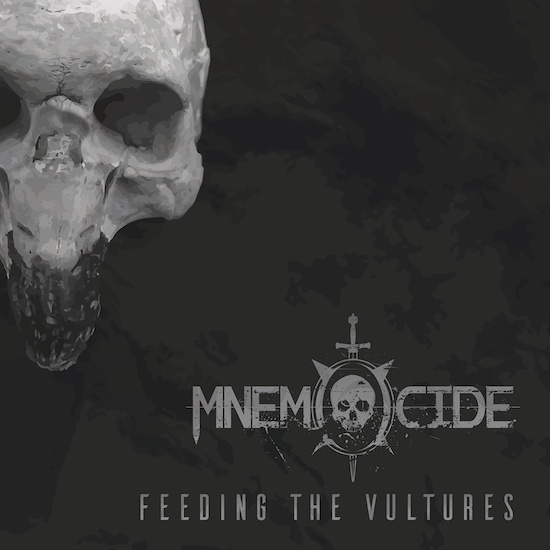 The first track on the album we’re about to premiere is entitled “Manifest“. In it, a woman delivers a depressing introductory statement, but one that’s difficult to deny. She observes that wars have raged throughout human history, spilling blood in vast rivers, followed by waves of despair and hate, but that somehow history always seems to leave us blind and ignorant. We are preceded by columns of shattered souls, and countless generations of shattered souls will follow us. And so, she says, “every generation will be blinded by mnemocide….”

That first spoken-word track on the debut album by this Swiss death metal band, who have themselves taken the name Mnemocide, could be understood as a manifesto for the album as a whole, both lyrically and in the dystopian and dismal atmosphere that the music itself generates while, at the same time, the humongous pounding grooves of the songs are ruining our necks. 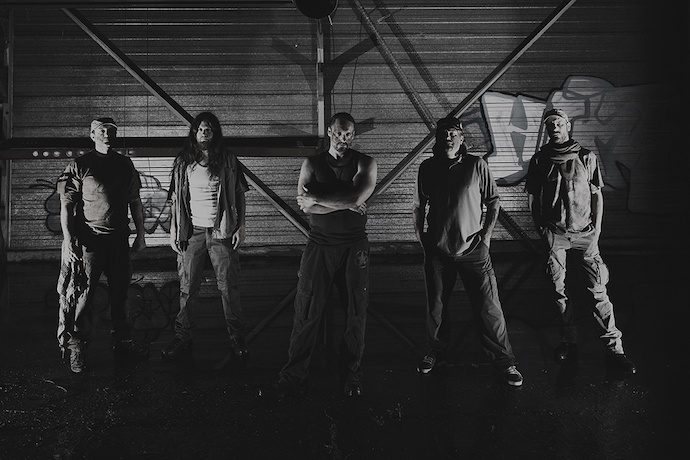 The album, Feeding the Vultures, will be released by Czar Of Crickets Productions on May 15th. Apart from that “Manifest” opener, it includes a pair of interludes that contribute to the music’s often haunting and nearly always harrowing atmosphere. The balance of the tracks are mainly mid-tempo affairs that are sinister, menacing, and brutish.

Those songs are impressive on a number of levels. The vocals are strikingly good and frighteningly powerful, which is just what you want for this kind of cruel and ravaging music. Though they are quite intelligible, they vehemently vent rage and disgust in gritty, belly-deep roars that blaze into bursts of fiery intensity. In addition, the vocal patterns match the rhythms of the music very well.

And those rhythms are punishing. The songs are anchored by heavyweight, bone-deep thrust in the low end and by nuanced drumwork that isn’t showy or hyper-fast but always seems to provide just what each movement in each song needs. This music doesn’t derive its thrills from speed or technical pyrotechnics, but from the galvanizing impact of pile-driving and jackhammering grooves, from stomping marches and a talent for compelling adamant head movement among listeners.

But Mnemocide’s talents don’t end there. They also craft riffs that are infectious in both senses of the word — both catchy and pestilential. The guitars growl, drill, and dart, intertwined with wisps and slitherings of melody that have their own hooks, even though their resonance is eerie, ominous, miserable, and cold. There are well-placed guitar solos as well, and they too shriek and wail, like the voices of millions of lost souls stripped from their bodies by the sadistic blood-lust of fellow humans. And to add further to the album’s atmospheric enhancements, Mnemocide add outro and intro segments that are doomed and spectral in their feeling.

The album as a whole is a bleak and black-hearted experience, but it exerts a vice-like grip on the senses, melding together coherent themes, deeply sinister melodies, and absolutely gargantuan grooves to very good effect. Definitely an album that should not be missed by fans of death metal. 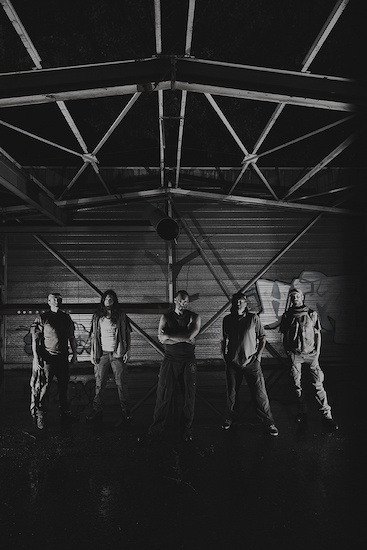 To repeat, Feeding the Vultures will be released by Czar Of Crickets Productions on May 15th. The label recommends it for fans of Gorefest, Entombed, Bolt Thrower, and Grave — and it’s available for pre-order now:

One Response to “AN NCS ALBUM PREMIERE (AND A REVIEW): MNEMOCIDE — “FEEDING THE VULTURES””