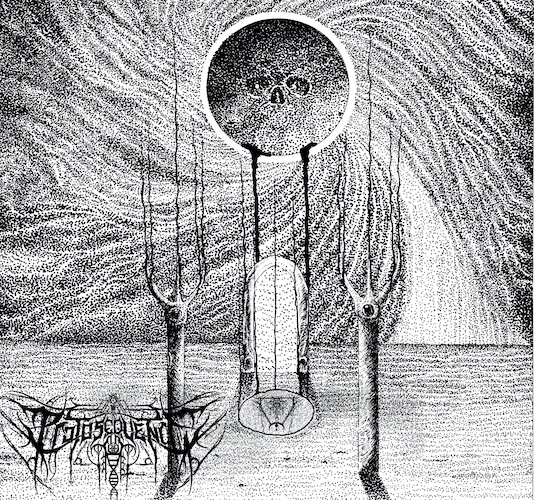 On their new EP A Blunt Description of Something Obscene, Protosequence have created a genuine musical spectacle, a fusion of tech-death and progressive metal that manages to be both jaw-dropping and beguiling, both head-spinning and bone-smashing. It creates pyrotechnic displays of breath-taking instrumental agility that often seem completely deranged or utterly alien, accompanied by bestial vocal ferocity, but it also seduces the listener with elements of mesmerizing melody. And around every corner (of which there are many in these labyrinthine compositions), a new surprise awaits.

The EP will be released tomorrow by Lacerated Enemy Records, but today we bring you the chance to hear all the music. Get prepared for a wild thrill-ride — and of course we have our own thoughts about these tracks to help you prepare, though no one will blame you for skipping over them and pounding the Play button down below. 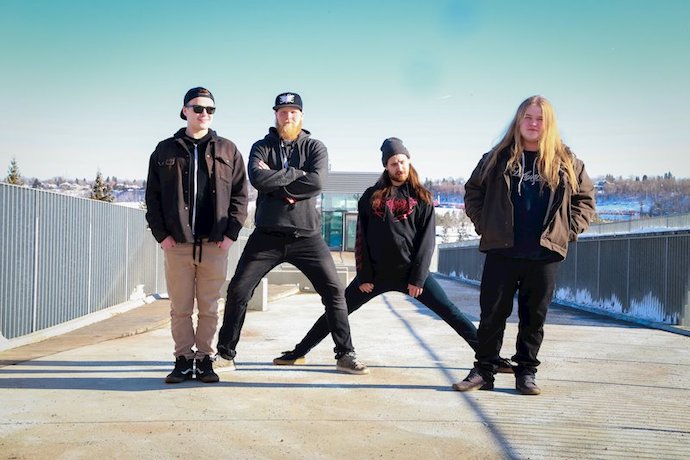 The current formation of this group from Edmonton, Alberta, Canada, consists of bassist Jacob Teeple, vocalist Josh Hahn, guitarist/vocalist Dylan Parker, and drummer Logan Vars. They all make vital contributions on this new EP, and they all shine.

Launched by insanely swirling guitars accompanied by bludgeoning drums, and segmented by darting bass notes, the EP opener “Savagery in Fundamental Behaviours” continually morphs and mutates, discharging bursts of riotous drumming and freakishly fast fretwork extravaganzas, which are themselves segmented by blaring chords and punishing percussive grooves. The arpeggios shriek like mad demons, dart through sharp and shifting angles, and slither with reptilian grace. Meanwhile, the vocals claw at the mind in livid roars, rabid barks, and hair-on-fire shrieks.

Both dissonant and eerily melodic, seemingly chaotic but surgically precise in its execution, this opening song is a bewildering but electrifying shapeshifter, a high-speed spectacle of exhilarating technical fireworks and ferocious aggression.

And thus the start of the title track comes as a surprise — a fluid guitar harmony whose glistening reverberations are mesmerizing, backed by a seductive bass line and a syncopated drum rhythm. Even more surprising are the vocals, in which singing (which is quite good) partners with the teeth-bared savagery of those roars and howls. Here, Protosequence more fully reveal their progressive-metal interests and the breadth of their songwriting talents.

Even in that more restrained opening sequence, the band’s instrumental interplay still reveals their technical skills, but as the speed and intricacy of the music increase, so does the eye-popping impact of their dexterity. Gradually but with increasing intensity, the band begin to whirl the listener’s mind through a sonic labyrinth that includes a jaw-dropping guitar solo, jackhammering grooves, punishing percussive stomps, bullet-spitting drum fusillades, menacing melodies, and of course kaleidoscopic displays of fretwork ebullience. Not to be outdone, the vocals veer from guttural growling to throat-splitting screams, wretched gagging sounds, and ear-piercing squeals.

By the third track, “Bleeding the Alienist” (which features an appearance by Joe McKee), it becomes clear that the band have a real knack for cooking up song intros that grab attention immediately. The gravel-throated bass noodling that opens the song does just that, and it’s quickly followed by bursts of insectile fretwork and gripping rhythm-section interplay. The band once again create an intricate and head-spinning collage of sounds that intertwines progressive and tech-death elements with aplomb. Drummer Logan Vars frequently creates audio facsimiles of a modern warzone while the string-slingers in the band cavort with seemingly mad abandon or pull back to make way for sinuous melodic accents. Episodes of methodical, atonal pounding go hand-in-hand with lunatic fretwork contortions rich in alien dissonance.

The final full track, “The Pale“, explodes immediately in a mauling, bone-breaking assault but soon mutates into a more hallucinatory experience etched with melodic motifs that are strangely mesmerizing. And although the band pull out the stops and take us on another deranged, high-speed roller-coaster ride, they also dramatically shift gears in the song’s mid-section with a moody guitar harmony — paired with a harsh vocal “harmony”.

When the band kick in the afterburners again, they increase the music’s intensity by orders of magnitude, and part of that intensity derives from the feelings of angst and bleakness in the melody. Of course, the band don’t completely strip away the technical fireworks, but the song has a perhaps more pronounced “atmospheric” component than any other on the EP, and the decision to end it with a bass solo was ingenious.

“The Pale” does not actually end the EP, which expands to album length through the inclusion of instrumental versions of the four main tracks. And it’s well-worth hearing what you just heard again, focusing solely on the instrumental performances, because it definitely takes more than one listen (many more) to comprehend everything that’s happening. 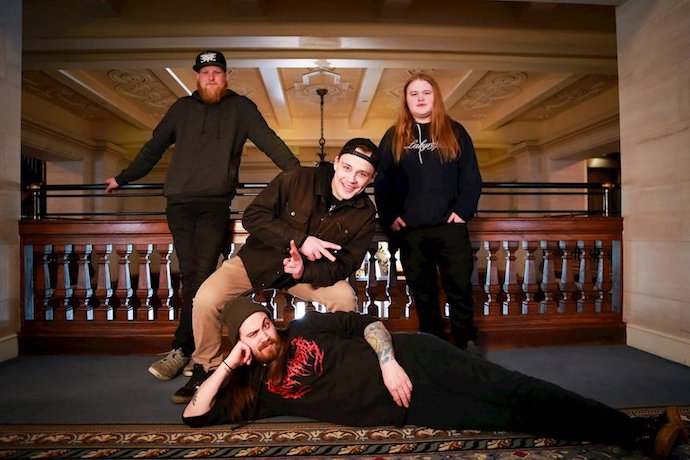 Credit for the album art goes to Jois Cabe Artwork. Lacerated Enemy gets credit for providing the EP on CD in a variety of bundles, as well as digitally. The label recommends the record for fans of Job for a Cowboy, Black Crown Initiate, The Faceless, Rivers of Nihil, and Signs of The Swarm.