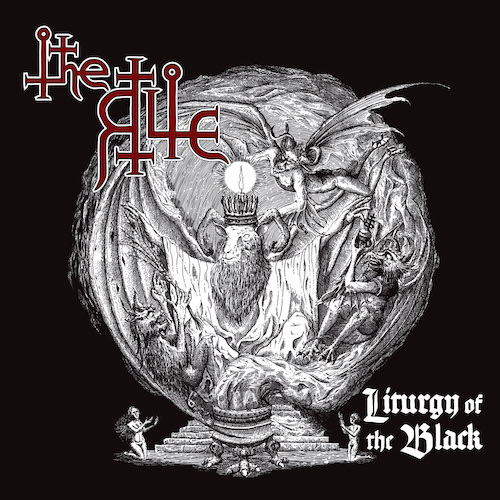 Formed in 2017, and making it their mission to create morbid black metal of utmost darkness and depravity, The Rite released a debut EP (The Brocken Fires) the next year, and then a demo (The First Sin) in 2019. Now this international group are fast approaching the release of their debut full-length, Liturgy of the Black, with a June 19 release date set by Iron Bonehead Productions.

On this new album The Rite continue along the path they began charting on those earlier releases, combining hope-extinguishing doom riffs, eruptions of merciless savagery, and saturations of gruesome atmosphere to create music that is laden with dread and fueled by the adrenaline of fear. A couple months ago Iron Bonehead provided a striking demonstration of the new album’s horrifying power through the debut of a track named “The Black Effigy“, and today it’s our fiendish pleasure to provide another as we premiere “Necromancy“.

The Rite set the scene with howling winds and a dismal riff that moans in gruesome fashion amidst slow, thunderous drum blows. They slowly ramp up the intensity of their their depredations with grim slashing chords, pounding beats, and ghastly lycanthropic growls, while also returning to the ominous and oppressive riff that began the song, and then mutating it into a frightening harmony over battering double-bass.

A ghoulish fanfare provides a bridge into a space of eerie glimmering tones wafting about a gravel-chewinng bass and preternatural whispers with an acidic harshness. And then the band bring the music back toward a crest of terror through a morbid guitar solo that becomes increasingly livid, and creeping keyboard tones. The moaning chords begin to generate an atmosphere of terrible fear and infernal menace and majesty, capping an experience that sends shivers down the spine while turning the skin to ice.

The song makes a fine follow-on to “The Black Effigy“, of which we previously wrote: “Heads will move and hearts will fall in the presence of this mid-paced black metal song, whose combination of grim guitars, spectral keyboards, and ugly serrated-edge growls creates a blood-freezing, horror-inspired atmosphere. The band do periodically shift into a higher gear, getting the blood pumping with galloping beats and pulsating riffs, but the main line of the song comes straight from a dank crypt.”

Iron Bonehead Productions will release Liturgy of the Black on CD and vinyl LP formats. For further info about the release, keep an eye on these locations as we move toward the June 19 release date: