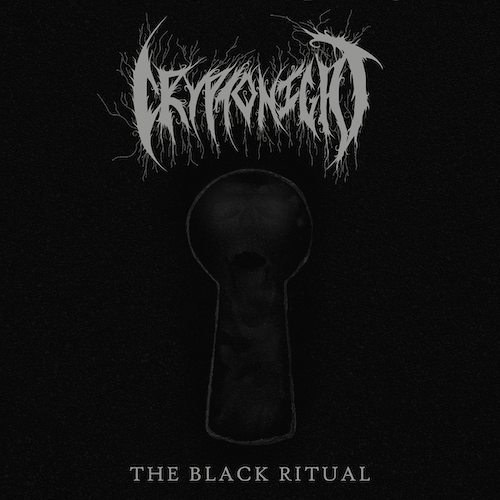 Cryptonight’s song “Abstertion” (the title of which refers to the action or process of cleansing) is an unnerving experience, and also a bone-smashing one. Stripped-down and primeval in its sensations, it pounds with crushing drum blows and near-atonal chords, the combined effect of which is something like a series of meteor impacts on granite monoliths. Interspersed with those titanic detonations are sharp bursts of dissonant shrieking tones — and the vocals themselves have a screeching, nerve-abrading quality (sometimes paired with malevolent roaring).

The combined effect of all these sounds is nightmarish. And the utter nihilism and disgust for humanity represented in the viciously declaimed lyrics makes the experience even more nightmarish. And to pour more salt in the wounding of your dreams, the lyric video we’re presenting takes us on walk through haunting, barren woods in the dead of night.

There’s only one reprieve…. 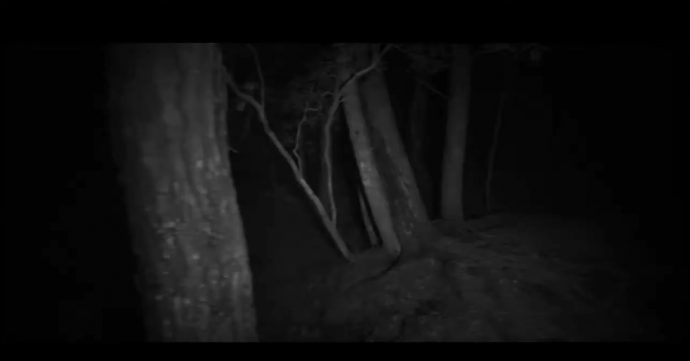 …and that reprieve comes quite unexpectedly. With no warning, the video takes us into daybreak and the music becomes dreamlike in a different way. But we’ll let you experience that mystical shock for yourselves when it comes, rather than say more about it. Just be aware that the reprieve is temporary, and the abyssal descent into punishment and torment will return.

That the music sounds nightmarish is no coincidence. Crytptonight is a two-person Canadian band — Jeremy Jackson Wells and Cassandra Xavier — and their debut album The Black Ritual, which includes the song in the video we’re premiering, was inspired by actual vivid nightmares they experienced at various points in their lives. Of this specific song they tell us: “Abstersion is about an occurrence that takes place in the dream world that is relative to a purge. All beings wreak havoc amongst each other and no one is safe. You must kill or be killed.”

To translate their nightmares into sound, Cryptonight deploy a combination of djent and doom, with other influences “and Easter eggs from video games, such as Bloodborne, Resident Evil, Diablo, and Final Fantasy X“.

The Black Ritual, which was mixed and mastered by by Anthony DiGiacomo at Deep Resonance Studio, was released in April of this year, and it’s available on a variety of digital platforms, which you can find via the link below. They recommend it for fans of Vildhjarta, Catacombs, Humanity’s Last Breath, Black Tongue, and Meshuggah. The lyric video was made by Joshua Lambeth at LambVision.

And in addition to the lyric video for “Abstersion“, we’re including a YouTube stream of the album as a whole.