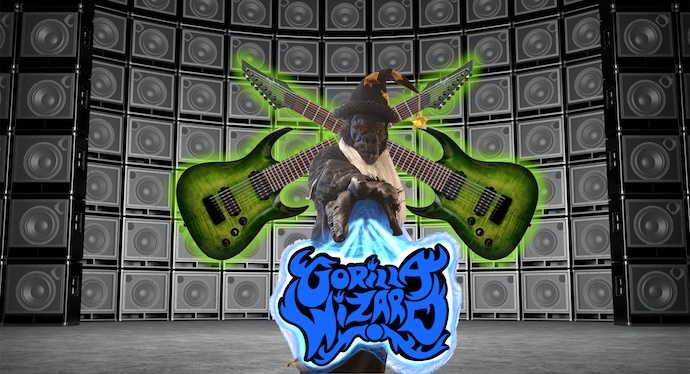 The band is Gorilla Wizard from Long Island, New York. As we observed when we first encountered their music late last summer, their outward trappings almost dare you not to take them seriously, perhaps most especially the white-bearded, wizard-capped gorilla costume in which guitarist Bertrum (the Gorilla Wizard himself) performs while his bandmates Mikal (Bang Boom), Ry (Slap Bap), and Gabrel (Howl) kick up a ruckus around him.

But as we also observed, you shouldn’t be misled by all that, because although the music definitely is a raucous kick in the head, it’s no joke. “The songcraft is excellent, the performances are razor-sharp, and when you hear the band’s debut album, Tales From the Cauldron, you’ll understand why this fearsome foursome chose a name like Gorilla Wizard” (they can pound you to smithereens, but the music is also magical).

What we have today is a video for a song from Tales… named “Maple Crunch” — a video in which the hungry protagonist makes the mistake of digging into a bowl of Gorilla Wizard cereal that’s not meant for human consumption, and winds up going on an unexpected excursion. And then after that we’ve got some thoughts about the rest of the album. 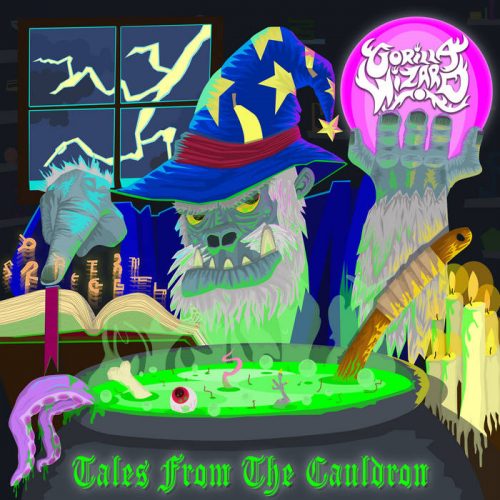 It’s not surprising that Gorilla Wizard chose “Maple Crunch” for the video, because it’s such a blood-pumping and highly addictive song, one that also showcases the band’s ability to kick out hard-charging, heavy-grooved death metal laced with aspects of stoner doom. It’s a gut-rumbling, skull-busting gallop, with a ton of low-end heft in the bass, a chainsawing guitar tone that brings old-school Swedish death metal to mind, vertebra-cracking punch in the hard-hitting drumwork, and an amalgam of ferocious growls, fierce yells, and cauterizing screams accompanying the pulsing chords and battering percussion.

When the band dramatically drop the pace into a slow, crushing stomp, the doomier elements of the band’s musical palette come into play. Accompanied by eerie wails, this boisterous brawl suddenly feels like a chilling spell. But have no fear, the track ends in a clobbering, jolting burst of destructive mayhem.

The stylistic ingredients used in the creation of “Maple Crunch” are a staple of other songs on the album, but other ingredients come into play as well. It’s fair to say that almost every track on the album hits harder than a battering ram. The grooves are almost ever-present, and the sonic weight behind them is humongous. The riffs are highly contagious, and that crunchy, sludgy, radioactively vibrating guitar tone seems potent enough to liquefy internal organs over time. The drumming remains vacuum-tight and persistently neck-snapping. And there are enough savage growls in the music to please most ardent death metal fans.

But the vocals are quite varied, with Ozzie-esque singing, caustic screams, lycanthropic howls, and strangled gagging tones in the mix (sometimes all in the same song). And while the band have a pronounced taste for turbocharged pacing, all pistons firing (and they are gigantic pistons), they pick their moments to ease back on the throttle. And so, for example, while “Smashosaurus” (true to its name) is an adrenaline-fueled juggernaut that seems dedicated to smashing everything before it into tiny fragments, the very next track (“Fill In the Blanks“) is a more mid-paced, more chilling, and more hallucinatory experience — though it too is capable of jackhammering a listener into a puddle of goo. That latter track provides a fine example of the strength of the singing, and is also a showcase for a pair of riveting guitar solos, one woozy and the other freaked-out and fire-breathing.

And there’s more to be found within the album, from the quasi-industrial brutalization of “Mechanization” (which includes bursts of eye-popping machine-gun drumming) to the bluesy stoner stylings of “Black and Blue“, the bleak and bruising (and psychedelic) ministrations of “Space Tree“, and the macabre house-of-horrors that goes by the name “Candlewax” (one of the album’s most dynamic tracks). And don’t miss the spectacular guitar solo that’s the heart of the closing track, “The Post Amble (Amble On)“.

The core ingredients of the music — the backbone, if you will — is rock solid, but it’s the variations from song-to-song and within the songs that makes Tales From the Cauldron worth checking out from start to finish. Definitely no joke….

The “Maple Crunch” video was written, directed, and produced by Gorilla Wizard bassist Ryan Markoe, and the cinematography was completed by Todd Rawiszer. Tales From the Cauldron is available now on the usual digital platforms, including Bandcamp — where you can also order a CD and merch. Visit Gorilla Wizard‘s Facebook page to get a discount code for merch (the 20% discount will be available until May 29.)

5 Responses to “GORILLA WIZARD: OUR PREMIERE OF THE “MAPLE CRUNCH” VIDEO AND A REVIEW OF “TALES FROM THE CAULDRON””