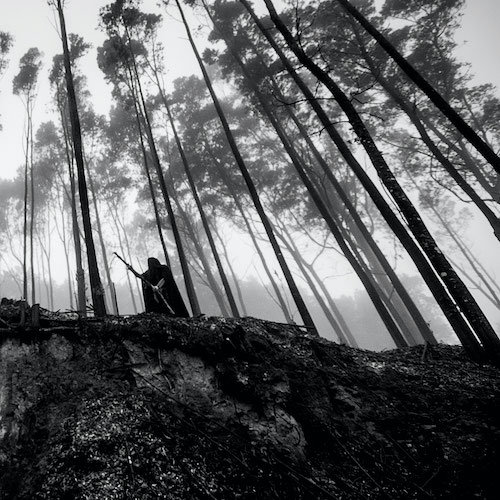 Over the course of the nearly 20 years that have passed since the spawning of Irae in the Portuguese black metal underground, the project has been prolific, with Irae’s music being released in three dozen demos, splits, compilations, live recordings, and five full-length albums, the most recent of which will be released by Signal Rex on the 20th of June.

Operating from within a Portuguese alliance known as the Black Circle, whose members also include Mons Veneris, Vetala, Decrepitude, and Rainha Cólera, Irae’s sole creator Vulturius has pursued a nihilistic vision of malice and misanthropy through a distinctive formulation that combines the aggressive abrasion of raw black metal with melodies of penetrating emotional power. On this new album, Lurking in the Depths, he was aided by session members on drums and synths, with the latter adding an important dimension to the music’s multi-faceted sound. 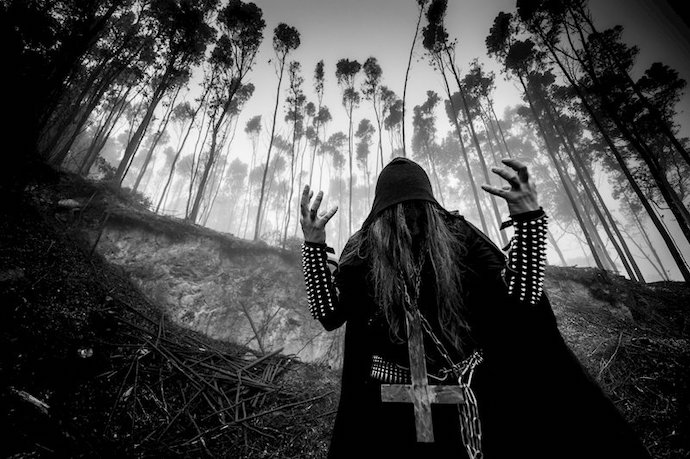 As you can see, we’re premiering a song from the album today — no less than the fourth one revealed so far. Entitled “Between the Ruins“, it’s a track that injects fire straight into the veins. It burns, shorts out the mental circuity, creates disturbing visions of madness and agony, and yet is tremendously exhilarating — and also unearthly.

Immediately, the music hurls the listener into a maelstrom of rapidly hammering and clattering drums, slashing screams, and corrosively raw yet still shining melody — a blend of sky-high cascading sound and whirling, dervishlike chords. That combination of sounds is tremendously exciting, but a sense of wrenching tension intrudes upon these spectacular sensations, leading to a less frantic drum rhythm and to pealing tones that are both dismal and spectral, mesmerizing and perilous.

Chaos erupts again, driven by pulse-pushing drum rhythms, bubbling bass notes, writhing riffs, and flickering leads. The music is intense and electrifying, and, augmented by those agonized shrieks, it continues to hybridize sensations of delirium, fury, and anguish in a way that’s frighteningly glorious. The song builds to a fever pitch of torment and turmoil, seemingly bringing us to the brink of complete mental and emotional disintegration. 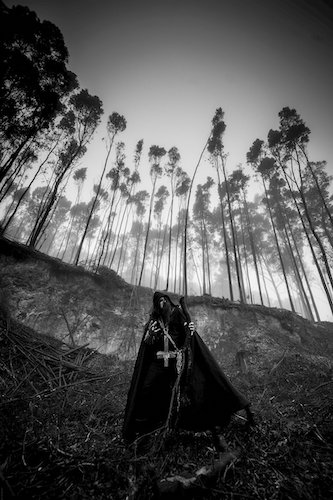 Along with this song we’re including streams of the three previously released tracks from the album. And we’ll also share these thoughts from Vulturius:

“The lyrics always been kinda a problem to me because I express myself better by music than writing, “but with all ideas in my mind, they weren’t difficult at all. They talk about self-isolation, eerie atmospheres in the mist, and the certain fall of humanity, because we are experiencing difficult times compared to a war or the times of the Black Plague due to this Coronavirus.”

On that topic, he shares this inspirational anecdote:

“I was on a flight to Italy on February 20 to play a fest with another band I’m in at the beginning of this pandemic, and on the way back, I lost my flight, so I spent the night sleeping at the airport and was only able to take the flight the next day, February 25th, and with that, I thought to myself that night being there, ‘Okay – nothing better to write some black metal lyrics or to get Covid-19 in this climate of pandemic and impotence of humanity,’ so I wrote three of the lyrics for the album on my cellphone that night.”

Signal Rex will release Lurking in the Depths on CD, vinyl LP, and cassette tape formats — and you can explore all the options via the link below:

2 Responses to “AN NCS PREMIERE: IRAE — “BETWEEN RUINS””