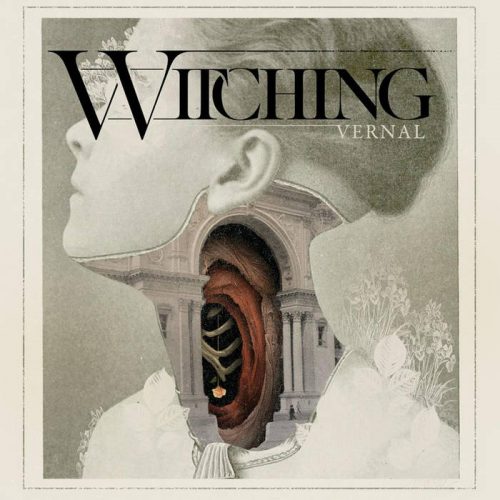 (Accompanied by the following review written by Andy Synn, we present the premiere stream of Vernal, the new album by Witching, which will be released on June 5th. It features cover art by Alex Eckman-Lawn.)

Life often throws up some strange coincidences, does it not?

Case in point, we almost missed out on hosting the premiere for this album, the debut full-length from Philadelphia quintet Witching, as the initial invitation to do so wound up getting buried in our ever-overflowing inbox.

Wouldn’t you know it though, the same day I got in touch with Islander to see if we had received a promo for the album (having become enamoured with the handful of pre-release tracks available on the group’s Bandcamp page) we also received a follow-up email from the band’s PR rep, with the final result that we agreed to combine my review with the premiere you’re about to listen to.

Like I said, coincidence is a strange, but sometimes extremely satisfying, thing. 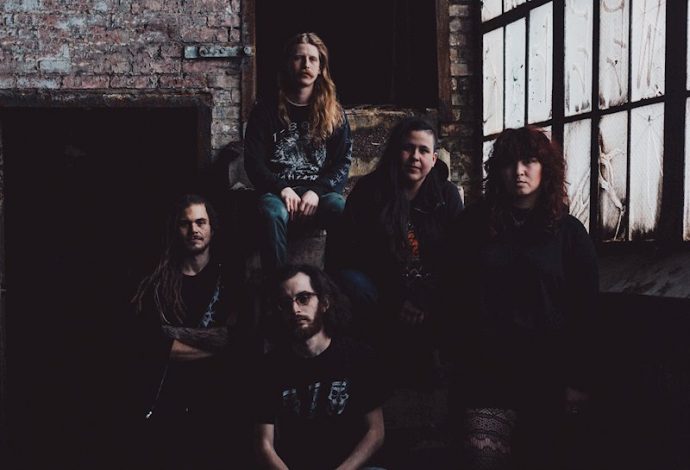 To the unfamiliar and the uninitiated, Witching’s sound is perhaps best described as a subtly proggy, occasionally doomy, but above all emotionally intense, form of Sludge reminiscent of both latter-day Ludicra and early Mastodon.

The comparisons to the former in particular are especially apt, as Witching demonstrate a similar talent for blending meaty metallic riffs and intricate melodic fretwork into a surprisingly progressive, yet undeniably aggressive, framework.

It also probably helps that the versatile vocals of Witching’s Jacqui Powell share a lot in common with those of Ludicra’s Laurie Sue Shanaman, but before you go thinking that the band are just a carbon-copy of their Californian cousins it’s worth noting that not only are Witching a far sludgier proposition (though not without their moments of blackened bite) but that their approach is even more reliant on dynamic shifts between haunting vulnerability and visceral intensity.

It’s hard to overstate, for example, how important the band’s grasp of structure and flow is to the success of a song like “Witness” – whose opening melodic tease quickly transitions into a lurching procession of sea-sick, sludge-soaked riffs, sudden spasms of scattergun snare, and growling bass-driven grooves, interspersed here and there with moments of proggy, atmospheric riffing and wild, squalling soloing – or how the decision to focus in on the more ambient and atmospheric elements of their sound during “False Marty” simultaneously serves to enhance the heaviness and impact of the track’s doom-laden riffs and spine-tingling blasts whenever they make an appearance.

And while Powell’s tender, tormented, vocals do, understandably, tend to steal a lot of the limelight, the musical contributions of her bandmates (Lev Ziskind and Nate Zagrimanis on guitar, Miles Ziskind on drums, Tatiana Buonassisi on bass) are just as vital to the record’s overall success, and each one of them gets several moments of their own to shine as well, whether it’s the prog-tastic riff-fest of the title-track, the Brann Dallor-esque percussive pandemonium during the second half of “Lividity”, or the shamelessly primal, fuzz-infused bass-lines which propel “This Is What You Deserve”.

As captivating, cathartic, and creative a debut album as any I’ve heard this year, Vernal is a veritable journey through practically the entire gamut of human emotions which already has me looking forward to the band’s next release… and the one after that… and the one after that… and you can now check out a full stream of it for yourself just below.

We will also share this timely message from the band:

“It’s been an emotional time in Philly and America on top of some of the darkest times in our lives. The world we live in is eating itself in so many different ways but at the same time we can see change begin to happen. We stand with Black Lives Matter. We believe that systematic racism has been ruining, dictating, and TAKING AWAY the lives of black people, people of color, and marginalized folk in this country. We believe that prisons, cops, and most aspects of capitalism should not exist anymore. These are the literal tools of systematic racism. They have proven to only help racist white men who only have wanted to help their bank accounts get bigger. Our country was built on stolen land by people who were stolen from their homeland and we will not say that those people should not choose to dismantle the same country and establishments that have failed them.

“That being said, our debut full length album is coming out on Friday, June 5th. Bandcamp is waiving fees on that day which gives us the opportunity to collect all the money people buy the record with. We will be donating 75% of the profits to the Philadelphia Community Bail Fund as well as Black Visions collective. It’s time to redistribute money to these organizations and to black people and marginalized people directly. Do your part to help.”

One Response to “AN NCS ALBUM PREMIERE (AND A REVIEW): WITCHING — “VERNAL””