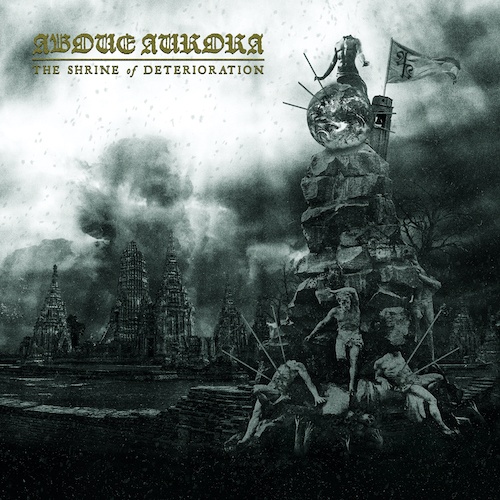 Founded in Poznań, Poland in 2015 and now living in Reykjavik, Iceland, the black metal band Above Aurora began walking a desolate path through bleak musical terrain in their 2016 debut album (aptly named Onward Desolation), and then took another step deeper into emotional darkness with their 2018 EP, Path To Ruin (also aptly named). And now they are ready for the release of their second album, The Shrine of Deterioration.

No one familiar with the band’s trance-inducing strategies and minimalist (though quite powerful) modes of expression, or the chilling hopelessness of their moods, should expect any radical revision of their style, which has already been powerfully established. And indeed, The Shrine of Deterioration is also well-named. Yet the album is not simply the same dire-wolf that stalked our darkest moods in the preceding releases. Above Aurora continue to walk their path, but they have become even more sure-footed as guides to the cold, lightless places within us all — as you will discover through our full stream of the album in advance of its June 6 release by Pagan Records. 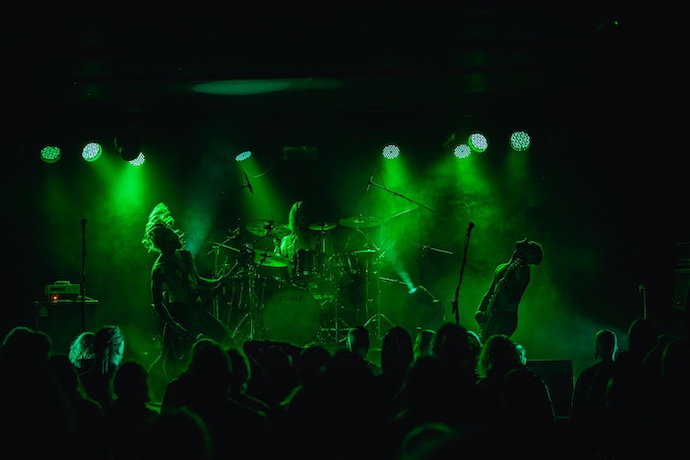 The band themselves offer an accurate preview of these six new songs: “The Shrine of Deterioration captures the current state of the band as mankind’s feeble condition continues to decline. Perhaps it is the essence of Above Aurora – our disappointment and resignation, loathing and self-reflections, sonically more complex than the previous releases, yet continuing the same form.”

This writer has his own impressions of the songs, one by one, but of course feel free to immerse yourselves in them through the player below. And they genuinely are immersive. The sound is powerful, and the emotional impact is almost relentlessly shattering, yet perhaps paradoxically, the music is capable of swallowing a listener whole, holding you in thrall despite the music’s darkness. 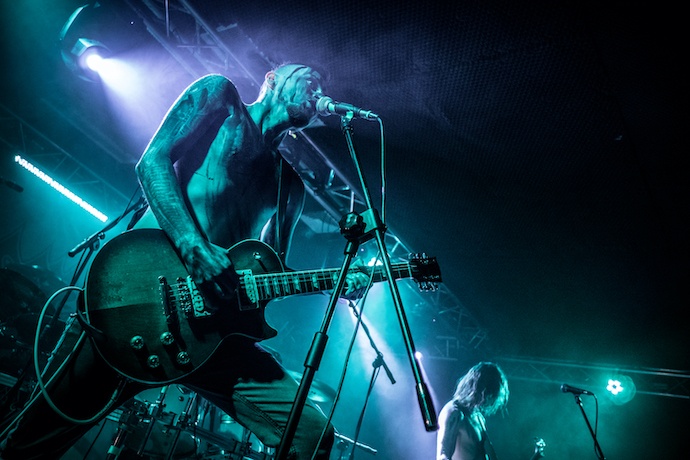 Consistent with the name of the instrumental opening track — “Blurred Luminosity” — shimmering synths and guitars that gleam with spectral light provide the overture, slowly growing in volume and intensity, and then the music suddenly shifts into booming drums and eerie, chiming tones, again surrounded by that wash of glimmering yet searing sound. The music becomes more tumultuous as the bass thrums and the drums tumble and catapult, but the trance-like effect of the swirling and chiming guitars deepens… until the sound gradually diminishes and silence falls.

I don’t know whether the follow-on track, “Virus“, was named after the current plague began to consume us or if the band were simply prescient, but the song immediately establishes a more bleak and harrowing mood. The music is again a wall of moving sound, but with a deep and dismal undercurrent and an aspect of wrenching pain thanks to the intensity of the vocals. The drumming begins in vibrant fashion but disappears as the music transforms into a chilling mist of ghostly ambience. When the guitars begin to ripple and whir again, a sense of tension builds, and then breaks in a fusillade of hammering percussion, hurtling bass, grim, drilling guitars, and caustic roars. The music pounds and writhes, pulses and seethes, collapses in despair, races and ravages.

The rushing surge of the drums and the dense febrile guitar vibrations that open “Barren Lore” create an unnerving atmosphere of tormented delirium. Wild, skittering fretwork underscores that feeling of fear-driven frenzy, a mood briefly broken by ringing guitar reverberations, but brought to new heights of intensity through the thunder of rapid double-bass munitions, the boiling wretchedness of the riffing, and the scorching fury and torment of the vocals. The band do segue into a mesmerizing guitar instrumental over a more measured drum rhythm, but the feeling of fracturing turmoil and despair never really goes away.

There is indeed a celestial quality to the opening riff in “Celestial Monarch“, but the minor-key melody is too steeped in chilling misery to offer wonder or comfort. The slow pace of the clanging bass and slugging kick-drum give the song the cadence of a death march, broken occasionally by bursts of pummeling bass. The cycling of that bleak riff drags the listener into a pit of hopelessness, and although the riffing intensifies and the drums begin blasting, that feeling mutates not into resilience but into anguish. Surprisingly, there’s a vibrant acoustic guitar instrumental at the end, but its moody and wistful tone doesn’t seem out of place. 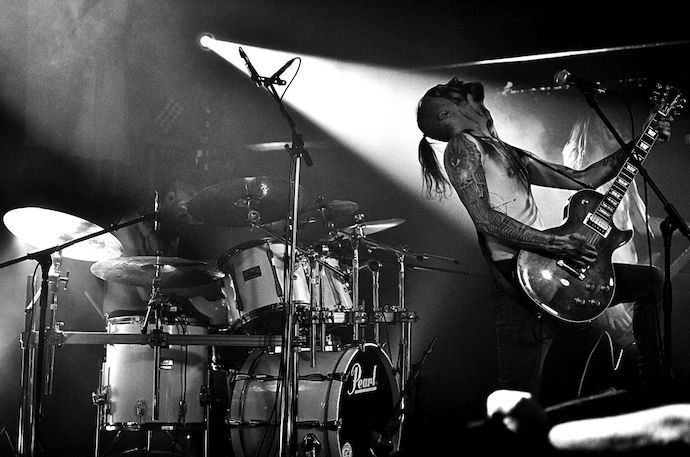 The slow pop and crack of the drums and a prominent bass riff sets “Precarious Foundation” on a deliberate course, while the dense and discordant wash of ringing and rippling guitars seems to regenerate the bleak and bereft atmosphere of the preceding track’s opening. The speed and intensity of the song do surge, and the vocalist’s harrowing howls lend the music an aspect of unchained savagery. The drummer and the bassist get a chance to seize the spotlight in a pulse-pounding duet near the song’s mid-section, but the chiming guitar arpeggio that comes next carries the music into an unearthly space. That mystical feeling persists in what follows, an amalgam of clanging bass and slithering guitar, though the intensity crests again at the end.

Above Aurora save the longest song for the end. “Splinters” immediately throws the listener onto the back of galloping drums, with the bitter ice-wind of the guitars cutting into your face. There’s a warm feeling in the bass, and maybe a sense of wild yearning in the ringing riff that follows, but that feeling is again counter-balanced by a sensation that it’s only a matter of time before everything falls apart. At times the song is spellbinding, and it’s as immersive as every other track on the album. You can lose yourself in the otherworldly guitar reverberations and the powerful pulse of the rhythm section, but it’s an extremely uneasy reverie.

A riveting guitar bridge hurls us back onto the racing steed and into the blizzard again. The music is again wild, but it’s the adrenaline rush of fleeing from some terrible calamity that’s gaining ground. Suddenly, the momentum sharply slows, the bass grumbles with a gravel-choked throat, and the reverberating peals of the guitar feel like the wailing bereavement of lost souls with no way home.

The Shrine of Deterioration” was recorded at Left Hand Sounds, while Haldor Grunberg was responsible for the mix and mastering. The artwork and graphic design were done by Kontamination Design.

The album will be available in the following formats: DIGITAL, CD, LP. And it’s available for pre-order now:

2 Responses to “AN NCS ALBUM PREMIERE (AND A REVIEW): ABOVE AURORA — “THE SHRINE OF DETERIORATION””