Two years ago we had the pleasure of premiering a full stream of Svedjeland, the second album by the Swedish black metal band Svederna. That was this writer’s introduction to the music, and it made a striking first impression, thanks to the remarkable vibrancy and passion that flowed through every song, and the high level of skill displayed in both the arrangements and the performances.

It was thus thrilling news in these quarters to learn that Svederna would be releasing a new album this year. Entitled Härd (which translates to “Hearth” in English), it’s coming out on August 28th through Carnal Records. And today it’s our great pleasure to premiere the album’s first single, “Tempelhärd“.

So many of the qualities that made Svedjeland such a striking achievement are present again here. The song is a dynamic experience, with changing tempos and moods, and the evolving melodies are penetrating and memorable. But even with the changes, what stands out foremost about the song as a whole is its unrelenting, no-holds-barred emotional power, a soul-stirring passion that’s unmistakable.

That power is the product of every individual performance, united. There’s a visceral intensity that derives from the thrumming heaviness of S. Frödeberg Karlin‘s bass lines, which are nuanced as well as bone-shaking. A. Thunarf‘s drumming is also a riveting experience, repeatedly seizing attention as he moves from blasting to hammering, from rapid progressions to locked-in back-beats, and more. And J. Holmberg‘s larynx-lacerating vocals are themselves absolutely searing in their intensity from start to finish, but near the end they really send even more shivers down the spine as they rise into screams of shattering torment.

But perhaps most compelling of all the ingredients in the song are the melodies (the power of the riff has always been strong with this band), which are the product of some combination of guitarist E. Weinestedt and Karlin and Thunarf, who are also credited with guitar performances in addition to their other duties.

The opening guitar instrumental is immediately appealing, and as it transforms into a sweeping and dramatic wall of sound it becomes even more powerfully alluring. It seems to convey a sense of yearning and wonder, but the mood changes through the fiery, carnal power of a new slashing riff, and changes again as the music becomes more despairing in its resonance, and eventually more feverish and defiant. And that description doesn’t exhaust the music’s mood changes. There’s also an instrumental passage in the song’s second half that seems introspective, but still vibrant, and mesmerizing.

Svederna told us this about the song: “The spellbinding riffs of ‘Tempelhärd’ mark the origin for the third chapter of Svederna. A journey behind the deceiving curtains of wealth misleading the listener with gilded chains through steep passages towards the metal meltdown”.

And it happens to be true that the riffs in “Tempelhärd” really are spellbinding. 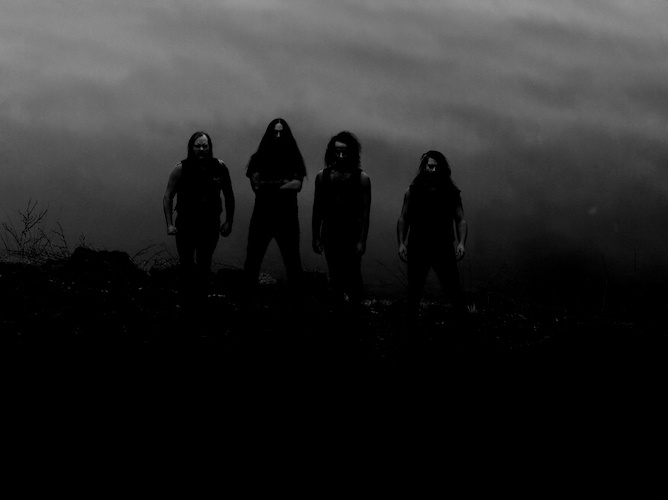 We’re told that the album’s “harsh lyrical themes deal with the imminent fall of the world around us and the necessity for a return to a natural way of life”.

For the third time, the recording and production of the album took place in the remote wilderness of Svederna‘s native Värmland, Sweden, with longtime collaborator Lars Robin Larsson Asp. The album’s cover art and illustrations were created by visual artist Björn Underek Lidberg in close co-operation with Svederna.

Härd will be released on CD and digital format through Carnal Records on August 28, with a vinyl release planned later in the year.