In 2008 the unusual French band Ysengrin released their debut demo, an album-length presentation entitled T.R.I.A.D.E. In the dozen years since then more than a dozen additional releases have followed, including two albums and many splits, but it seems that the life of Ysengrin is drawing to a close, with what will be the final album now slated for release by I, Voidhanger Records on July 17th, to be followed by a final split release.

The new album, Initiatio, consists of four tracks from that early T.R.I.A.D.E. demo, “re-imagined” and re-recorded under the direction of the band’s guiding hand, Guido Saint Roch. In addition, the album includes a revised version of “Monumentum” from the Archivum MMV-MMX demo dating to 2010, plus four new compositions, including two ambient numbers recorded live with the help of Frater Stéphane (N.K.R.T., Rosa Crux). As I, Voidhanger, says, “Initiatio is therefore an ouroboros serpent biting its tail: the end is the beginning, and the beginning becomes the end”.

One song from the new album, “Potencée d’Or”, has alredy been revealed, and we’ll come back to that one later. But our primary mission today is to present another track from the album, “Ode à l’Escarboucle“, which is one of the pieces that had its origins on the T.R.I.A.D.E. demo. 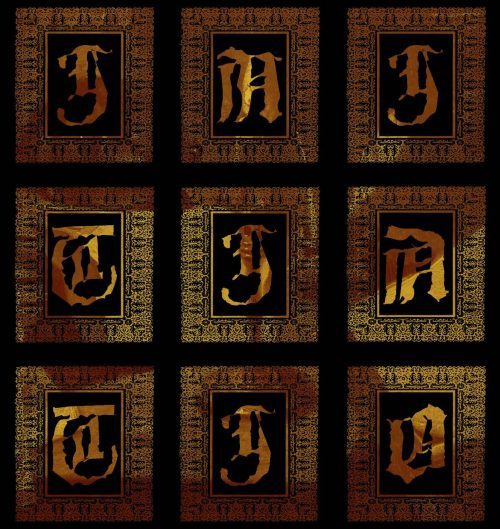 This new version of “Ode à l’Escarboucle” is primal and hallucinatory, head-moving and brain-twisting, energizing and esoteric. It has physical vitality and psychoactive properties, and a diabolical atmosphere. It gets its hooks in your head right away with a a rumbling riff, a neck-cracking drum beat, and a syncopated pinging tone whose source is mysterious. Yet the gruesome death growls are frightening. And then the song really begins to rumble and jolt with greater vigor and riveting effect.

The music becomes more measured and seductively sinister again, with crashing cymbals augmenting those pinging rhythmic tones, and then heavier again, with a chugging riff backed by strange shining waves and a guitar solo that seems both bluesy and psychedelic (yet still accompanied by those monstrous growls). The strange permutations of the music persist, notwithstanding the song’s carnal and charismatic powers. Weird murmuring bass notes play a role, as does a warbling and wondrous arpeggio. And then the drumming begins to gallop and the bass begins to pulse, as eerie wailing tones drift above like psychoactive mist and the voice chokes as if being strangled and issues chants in cracked and fervent tones.

As mentioned above, Ysengrin also worked new black magic into the first track revealed from Initiatio. “Potencée d’Or” also first appeared on T.R.I.A.D.E. back in 2008. In its new form, the song is composed of different elements of sound, each with its own emotional resonance, that phase together. The lilting guitar instrumental that briefly opens the track has a mesmerizing, medieval air. By contrast, the fuzzed-out chugging riff and the thumping, head-cracking rhythm again produces that primal, carnal response, while the deep croaking vocals strike fear in the heart. When the wailing and eerily shimmering tones of the song emerge, along with distant shrieking, they seem to open the door to a glimmering spirit world. The guitar solo is also otherworldly, but also glorious. Altogether, these different sensations — both visceral and vicious, frightening and fantastical — create a devilish atmosphere that’s fascinating.

Initiatio was produced by Brungard of Herxheim (who also also have a new album coming out), and he also contributed lead guitars, keyboards, and backing vocals. It was mixed and mastered on analog gear by Brungard at Bells Collars Bizarre.

The album will be released on July 17th by I, Voidhanger Records (vinyl LP, jewel-case CD, and digital), and it features wonderful cover art by the very talented Luciana Nedelea.