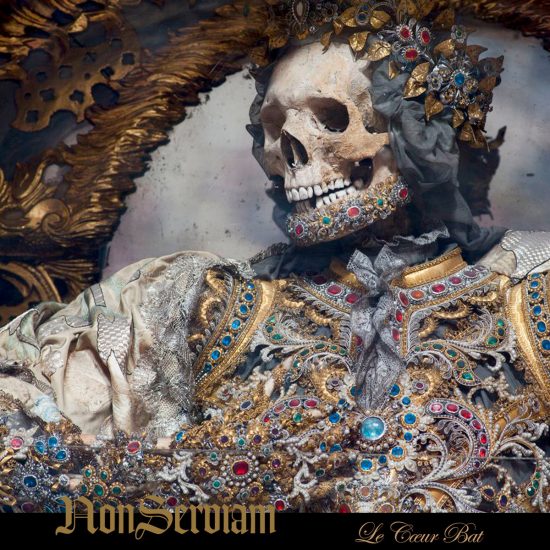 I had a big block of uninterrupted time to myself yesterday afternoon, with my spouse out of the house at a safe birthday celebration and the cats sleeping. So of course I spent the time digging through my list of new black metal(ish) music in preparation for this column. You see the results: More time means more picks.

I have Cvlt Nation to thank for this first discovery. The introduction to their premiere was brief and didn’t include much detail about the music, but the blaring headline did the job: “Listen To Non Serviam’s Salem – It’s Depraved And Sick! This Band Sounds Like NO OTHER!” I also thought the cover image was fantastic, and so decided to see what was going on with the music. 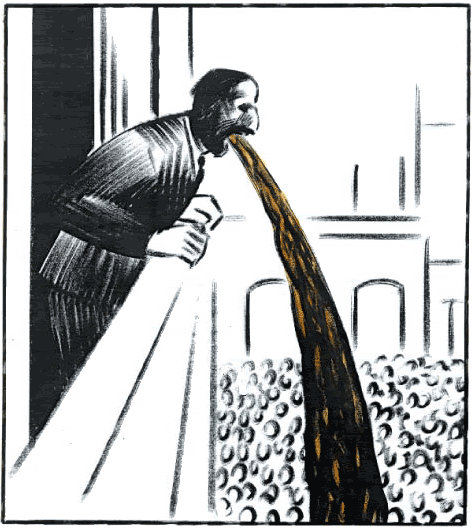 After listening to “Salem“, the song that Cvlt Nation premiered, I did some googling and discovered that Non Serviam have a Bandcamp page for their forthcoming album Le Cœur Bat that includes two more track streams. One of them, “Inno Individualista“, is described in the band’s video for the song (released last fall), as an “unreleased cover of a traditional 1901 anarchist anonymous folk song from Italy”. The other one is entitled “Je Contre (Demo)“.

If you’re a completionist, I also discovered a 2018 Non Serviam video for a track called “Bombe H“, which isn’t on the album, and others available at the band’s YouTube channel, plus one that YouTube apparently banned but is available here. But I’m just going to focus on the three tracks available at Bandcamp from Le Cœur Bat.

This anonymous collective describe their music as “Industrial/Experimental/Black metal/Grindcore/Trip Hop/Baroque/Electro/Doom/Crust to release vengeance & freedom on the world.” That’s a mouthful, and I wouldn’t say that “Salem” checks off all those boxes, but it definitely is difficult to pin down. Searing tones and ghostly wailing voices flare out from unpredictable drum somersaults and fusillades and a wash of strange, mercurial chords and shrieking vocal assaults. There’s a dense, chaotic intensity to the music until a fiery voice issues vehement proclamations, and then the storm surges again. There are other breaks and transformations in the song. It reminds at time of Anaal Nathrakh going full-bore, and at other times it’s hallucinatory.

“Inno Individualista” has a similar maelstrom-like quality, but incorporates pulsing industrialized rhythms, wild flickering guitars, bursts of glitchy electronica, another cavalcade of divergent vocals, and a mass of other unidentifiable sonic abrasions. “Je Contre (Demo)“, on the other hand, is very different at first, almost like something you’d hear in a dance club, but with more distortion and greater lunacy. Eventually, the voices and the sounds become unhinged, like a sonic meltdown, and saxophone-like tones moan through the increasingly brain-spattering assaults. Body-moving beats re-surface, but by that point the listener has lost their moorings, and Non Serviam don’t make it easy to find them again.

Definitely not for everybody, but although I’m still trying to pick up the mental marbles that I lost, I thought it was all cool.

Le Cœur Bat is set for release on September 2nd. The band are looking for a label to release it. The line forms to the left. 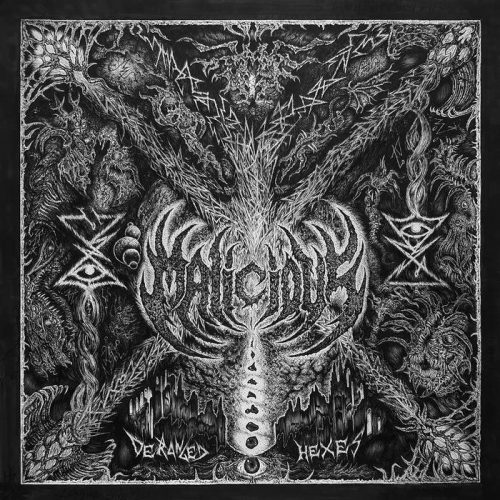 The roiling, brain-twisting ecstasy of “Hideous Transformations” is glorious. To be sure, the song does have its malicious qualities — the drums mercilessly hammer, the bass savagely pulsates, and the vocalist is bloodthirsty in his viciousness — but the rhythm section also engage in impressive acrobatic displays, and the guitar mania really sets the song apart. It’s such a wild, swirling, fret-leaping, stylistically morphing extravaganza that it left my mouth hanging open — and then breaking into a big smile when the music stopped.

Trying to follow what’s going on here as it happens is a big challenge, but the technical skill and the songwriting ebullience are undeniable, and the energy and spirit of the song are highly contagious. Deranged hexes indeed….

From the album Deranged Hexes, set for release by Invictus Productions on September 4th. 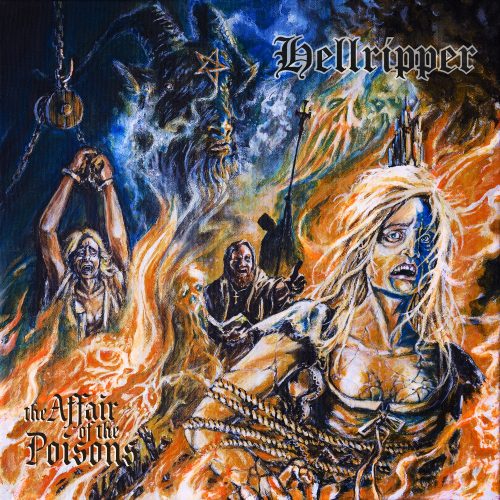 From humble beginnings this solo project of James McBain has moved from self-releasing its 2015 debut EP (The Manifestation of Evil) and its 2017 debut album (Coagulating Darkness) to landing on the roster of Peaceville Records, which will release Hellripper’s second album this coming fall. For those of us who’ve been adherents of the music, this is a happy development but not a shocking one. And the first song from the album is a great reminder of how damned good Hellripper is.

“Spectres of the Blood Moon Sabbath” is a turbocharged blood-rush of thrash and old school heavy metal with goblin-on-fire vocals, and it includes some groovesome, powerfully head-moving riffs as well as fire-breathing solo work. It’s such a fist-pumping spectacle that it’s hard for me to believe that any died-in-the-wool fan of evil, high-voltage heavy metal won’t fall for it.

From the album The Affair of the Poisons, set for release by Peaceville Records on October 9th. 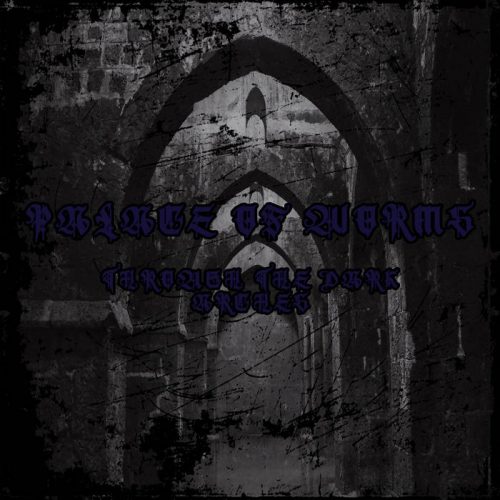 The next music I’ve chosen is a new three-song demo named Through The Dark Arches. It’s the first new music in almost four years from this Bay Area project, which is the work of Balan (also known for his work in Botanist, among other endeavors). It’s also apparently the penultimate work of Palace of Worms, which has announced that it will come to an end after an upcoming full-length.

Musically, the new demo is a departure from previous releases, this time inspired by classic English death/doom and early ’90s gothic metal like Type O Negative and Theatre Of Tragedy. But even though it represents a shift from the early black metal of Palace of Worms and still other shifts which occurred later, I still wanted to include it in this column because it’s such an enthralling record.

The music does indeed recall the influences mentioned above, but it’s far from a rote rehearsal of them. The ringing guitar harmonies and organ accents are otherworldly and spellbinding; the darting and swirling arpeggios are eye-popping; the dynamic rhythms are heavy and heaving, jackhammering and galloping, and also blazing. And Balan proves his vocal versatility with seductive singing as well as voracious growls.

If you were expecting something invariably gloomy, this is not that. It does create a sinister, frightening,  and ominous atmosphere, but on the whole it’s more like a brilliant trip through a mystifying netherworld carnival.

P.S. There’s a long stretch of silence in the closing track, but stay with it, because what comes next is celestial and entrancing (and chilling), perhaps showing us what lies beyond the dark arches.

Tail-Tied Hearts is an intriguing name for an album, but the record’s cover art provides clues. It depicts a real-world phenomenon known as a “rat king”. This article at The Font of All Human Knowledge provides more info, including possible explanations and folkloric superstitions that surround the strange configuration.

Dunwich knot together many musical tails in their music too, but the intertwining doesn’t tie your brain in knots — though it is surprising. At the outset, massive bass tones, vibrant drumming, and distant chiming guitars provide the main backdrop for sultry and seductive female singing. But the song suddenly swells in power and the vocals transform into vicious growls.

The swirling chords and wildly flickering leads have an otherworldly quality, and although the music seems perilous and even poisonous (and dosed with mutilating abrasion), it possesses a kind of evil grandeur as it soars. Right down to the gothic organ and skittering electronics at the end, I found myself amazed (and couldn’t sit still either — the rhythms are damned potent).

Tail-Tied Hearts will be released by Caligari Records on August 21st. 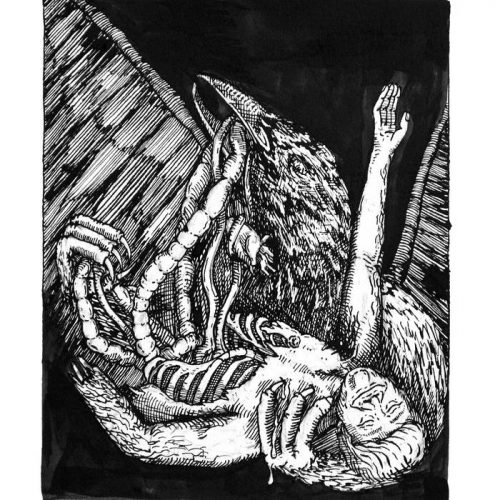 “I Only Pray For Your Death” is a new single by this North Carolina band, whose EP Some Kind of Vampire (released in May) I showered with praise here. I assume the song’s title was directed at you instead of me.

Anchored by a skull-hammering percussive gallop, the song delivers enveloping waves of grim yet still glorious sound, shattered by tortured shrieks. As the rhythm changes (while continuing to clobber your head), notes ring out in mysterious and alluring fashion, and there’s a crazed solo in the midst of the senses-saturating cyclone as well. Feelings of tension, turmoil, and bitterness radiate through the music, yet it’s still very easy to get caught up and carried away by it. 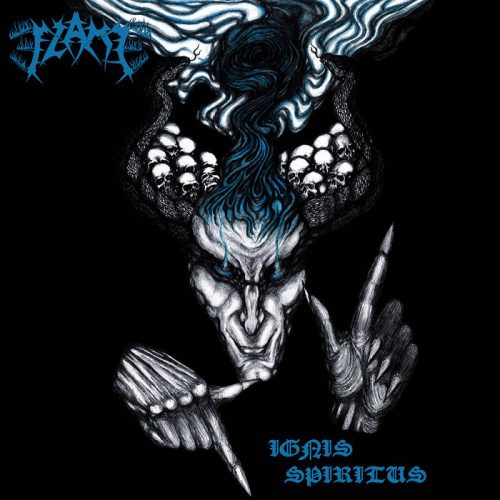 This Finnish band, whose roots go back to the late ’90s, have made three digital releases this month — a single named “Cryogenian“, an EP named Son of Mourning, and the latest one, a single called “Firespirit of Rebellion“. “Firespirit of Rebellion” will be included on a new five-song EP named Ignis Spiritus, which will be released by Primitive Reaction on August 21st.

This latest single is an unmistakably vicious black/thrashing assault marked by hate-filled vocals (and by ominous clean vocals as well), prominent bass lines, and neck-cracking drumwork. But the riffs are magnetic, and the soloing is electrifying (and otherworldly) — and the song unexpectedly ends in a wash of eerie yet entrancing melody as the rhythms vanish. In other words, this isn’t paint-by-numbers thrash, not by a long shot, and it repays repeated listening.

The other two releases are also quite good (the EP in particular is fantastic), further bolstering the idea that Flame really are excellent songwriters who don’t feel tied down within rigid genre boundaries. I urge you to listen to both of them too. 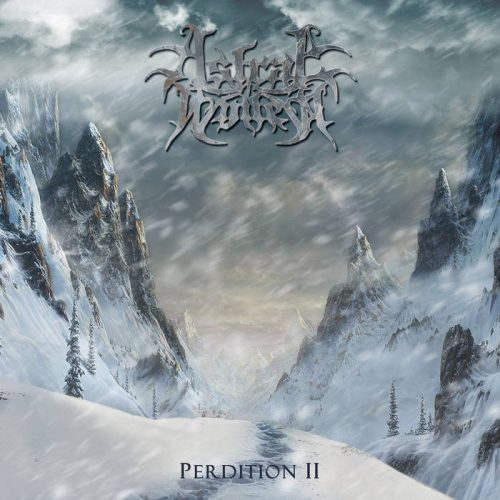 This Tasmanian solo project has completed a fourth album, and “Corridors of Time” is the first advance track from it. It represents a dramatic change from the immediately preceding selection in this column. Performed largely with acoustic instruments, it’s nevertheless quite powerful in its sound, and powerful in its emotions as well.

I’ve used the adjective “enthralling” at least once before in this post, but have to use it again here. There’s a pronounced mystical quality to the music, and not only because there’s an ethereal  background shimmer that repeatedly rises and sets, but because the layering of additional instruments is also captivating, even though it’s sound is sombre and has a chilling effect on the listener.

From the album Perdition II, which will be released by Immortal Frost Productions on July 31st.