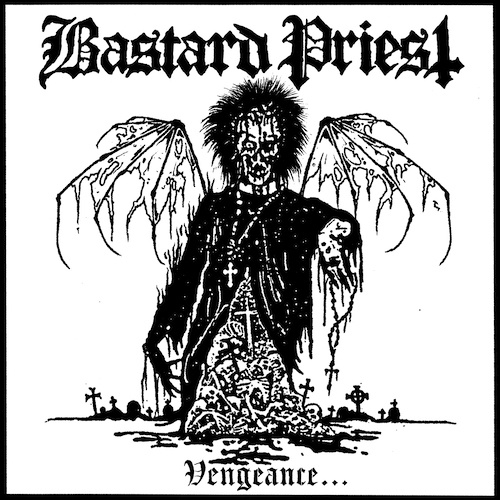 More than seven years ago I was moved to compile a list of the best Swedish death metal albums I had heard during the five preceding years, i.e., from 2008 through 2013. Just putting that list together was a reminder that the style is not monolithic, even though there are certain common attributes that tend to stand out.

In the intervening years we’ve seen both a revival and resurgence of older bands and the appearance of new bands who’ve been drawn to those ancient yet deathless sounds. One of the releases I included in that 2013 list was Bastard Priest’s second album, Ghouls of the Endless Night. That album came out in 2011, and had followed quickly on the heels of the band’s debut full-length, Under the Hammer of Destruction (2010). But the band broke up in 2013 and we’ve heard nothing further from them… until now.

Just last year the Bastard Priest duo of Matt Mendoza and Inventor re-formed, and are now returning with a new 16-minute EP aptly entitled Vengeance…Of The Damned, which will be jointly released on July 24th by U.S.-based Electric Assault Records, Mexico-based Chaos Records, and Japan-based Record BOY. Today we’re stoked to bring you the premiere of one of the new tracks — “Eyes of the Possessed“.

In a word, the song is electrifying. With a momentous overture of grand, pounding drums and seething riffage the band surge forward into a mad gallop accented by a burst of even more lunatic soloing. The song is a jet-fueled race, its battering kit-work and toxic, cutting chords segmented by skull-splitting hammer blows and its red-eyed, rabid savagery amplified by a howling berserker voice. The song drives so fast and hard that its adrenaline-fueling impact on your pulse-rate is likely to be irresistible.

Mid-way through, however, the band decide to give your neck a good workout too, by segueing into a compulsive chug-fest, and then they slow the pace in order to introduce an eerie, swirling solo and the wailing voices of tortured spirits. But that’s not the last solo you get. When the band shift into high gear again for one final hell-ride, the soloing is a blazing piece of fretwork fireworks.

Not all reunions have happy endings, but as this song demonstrates, Bastard Priest’s re-uniting is a very welcome occurrence.

The EP is recommended for fans of Carnage, Slaughter, Master, Nihilist, and early Death.

As mentioned, Vengeance…Of The Damned (with cover art by Nicky Rat) is getting a broad-based release, with each label (and the band) having something unique to offer. The first 100 copies issued by Electric Assault Records will be on exclusive clear vinyl; Record BOY will provide an exclusive translucent green vinyl edition limited to 100 copies (in Japan/Asia only); and Bastard Priest will sell the record on exclusive translucent blue vinyl, also limited to 100 copies, while Chaos Records will provide exclusive distribution in Mexido and Latin America on CD.

All the offerings will be going up for pre-order today, so check these links for further info:

One Response to “AN NCS PREMIERE: BASTARD PRIEST — “EYES OF THE POSSESSED””