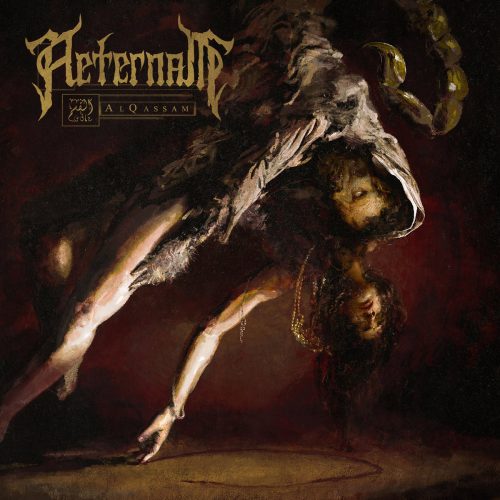 (Three months after its release, DGR finally dug into the fourth album by the Québec band Aeternam and is damned glad he did, as explained in this extensive review.)

Easily one of my biggest brick walls in terms of recent writing, because I have kept going back to it, over and over.

I wracked my brain for a while wondering where exactly I had picked up on Montreal’s hybrid symphonic death/folk/blackened-death metal group Aeternam and their new disc released in March, Al Qassam. It’s been a ghost haunting the backlog for a little while now, until it occurred to me that we hadn’t really covered the lead-up to their new disc at all.  Our most recent mention of them was due to vocalist/guitarist Achraf Loudiy appearing on Egyptian death metal group Scarab’s new disc, Martyrs Of The Storm — also released in March.

The whole reason they’d remained in the ‘keep an eye on’ pile was due to a handful of enthusiastic reader recommendations for them in previous years during our year-end list roundups. In fact, I think both 2012’s Moongod and 2017’s Ruins Of Empires are part of my collection now due to those recommendations. So, Al Qassam and its excellent cover art have been waiting for a proper look up and down almost since its announcement.

Given my current quest to sweep through the early parts of the year for anything we might’ve missed on top of the usual collection of albums I’m prone to dive into, finally diving headfirst into Aeternam’s latest felt like a natural thing to do. And wow, what a fantastic choice that has been proving to be. 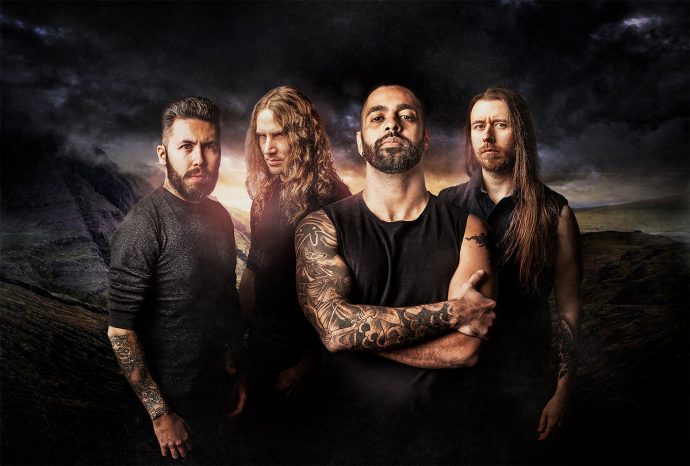 To start, Al Qassam is an expansive disc. The band stretch far and wide across the musical spectrum available to them in the near forty-five minutes of music presented here. Each of Al Qassam‘s nine songs feels massive, whether it be the handful in the three-to-four-minute range or the juggernauts in the six-minute area. Aeternam make good use of that time without seeming like they’re stretching for it; some have a small sequence of movements within them so that they are their own mini-epics and others are just written to be massive death metal tracks.

It’s easy to see why the band have drawn the occasional comparison to Behemoth’s mid-to-late 2000s work. Especially the percussive opening movements of “Ithyphallic Spirts Of Procreation” at times bring small reminders of “At The Left Hand Ov God” on Behemoth’s Apostasy, though the bass work in “Ithyphallic Spirits” deserves its own shoutout given how impressive it is when it cuts through the mix — because the guitar work as a whole here trends toward the gigantic and atmospheric.

At times Aeternam are happy to descend into a tech-death maelstrom but for the most part. when they’re not using a variety of unexpected instrumentation, multi-faceted vocal work, and various folk melodies to add atmosphere, they’re smashing out some punishingly heavy stuff that allows the rhythm section to pummel the ground to absolute nothingness.

Al Qassam‘s early songs are a fun contrast to those that take place in the latter half of the disc. Its first four songs are a little like Aeternam are establishing different foundations for their sound, showing off the vast array of influences and styles they pull from regularly. It’s interesting that two of the songs for which Aeternam shot music videos are within that first four songs. Opener and title track “Al Qassam” is one of those videos and is an absolute bruiser of a song; massive death metal riffs and circle-pit moments abound. The band describe lyrical inspirations of the song on the page for their music video, stating:

“The lyrics are in traditional Arabic. Inspired from an ancient middle eastern black magic book, they represent a true incantation to summon and make a pact with the demon Al Abyad. Sing at your own risk ;)”

On the opposite end of the spectrum is “Lunar Ceremony” — the subject of a second music video — whose vocal work is more clean-sung and the music more regionally and folk influenced. In between those two is the quicker moving “Bringer Of Rain”, whose thrashier guitar work and galloping drums make it one of the early headbanging highlights. The way the chorus and “Bringer of rain” segment deftly move is near hypnotic in the way it makes you want to move. There’s even some narration within “Bringer Of Rain”, in case its near-five minutes didn’t seem packed enough. Combined with the aforementioned hammering of “Ithyphallic Spirits Of Procreation”, it starts to seem like Aeternam are charting a vast expanse in the front half of their album.

You probably noted in the all-consuming, all-being genre descriptor that was an attempt to paint everything in Aeternam’s sound that there was a mention of the word ‘symphonic’. Aeternam have an ever-present and pervasive layer of orchestra and choir samples throughout their music, mostly to add to the grandiose sense of their music. It’s readily apparent in the album’s early half but after the brief calm that is “Palmyra Scriptures”, which sees the band joined by Orphaned Land vocalist Kobi Farhi, things really kick into crushingly heavy gear and the band pull out all the stops in regard to those symphonic elements.

The last two songs, “Ascension” and “Poena Universi”, especially seem built to flow into one another as they congeal into one epic journey. “Ascension” especially sticks out as one of the highlights of Al Qassam. It’s blastbeat heavy nature and chugging riffs make a more traditionally ‘brutal’ song on an expansive album. It’s a crushing song that leads into the gigantic closer of the album “Poena Universe”, which is the song equivalent of Aeternam throwing everything they have on this disc into one track. Big string segments, sweeping choirs, humongous grooves, a multitude of vocal styles, incredibly melodic lead section, some hefty rumbling bass, “Poena Universi” has it all. It’s a fantastic way to close out a disc for sure, especially since it plays out like a six-minute summation of Al Qassam as a whole.

Aeternam have on their hands one of the most expansive and fully fleshed-out releases so far this year. A lot of bands aim to have as many elements as possible within their music and some even play in a very similar realm as Aeternam do here, but very few are able to tie it all together as well as they do on Al Qassam. While the opening half of the disc is a little more scattered in terms of styles, the album really does congeal together in its back half and becomes something special.

It’s a hammering death metal record that really does travel through a variety of styles and it keeps the trip interesting the whole way through, with moments of respite to break things up and make Al Qassam seem musically cinematic. While it has certainly taken us a while to turn the ship back around and have another go at the early part of the year, this one has easily made the trip worth it.

One Response to “AETERNAM: “AL QASSAM””