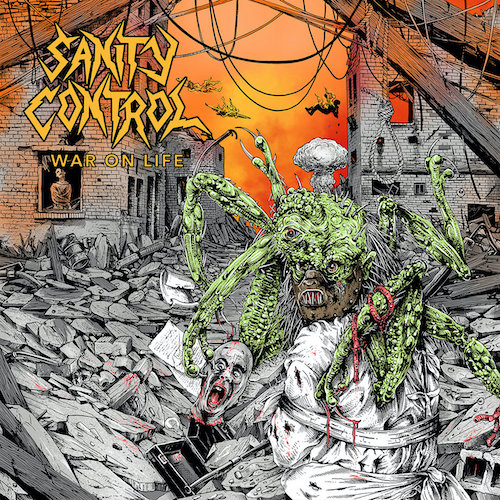 Imagine yourself strapped into an electric chair with an executioner who’s having fun maniacally flipping the switch on and off faster than a rat darting through a maze while another rabid maniac brays and barks in your face. Alternatively, if that sounds painful instead of exhilarating, imagine yourself bouncing off the walls like a ball bearing in a container locked into a pneumatic paint shaker. Still sound painful? Give me a minute and I’ll come up with another metaphor — because there’s not one damned thing painful about listening to Sanity Control‘s “War On Life“. It’s a mosh-triggering thrill-ride that’s likely to put a big stupid grin on your face.

As much of a blast as this new song is to hear, it’s also a destructive rocket fueled by fury and disgust. The band explain the song’s title, which is also the title of this Polish group’s forthcoming debut album: “Humans are the most destructive force on Earth. We live to kill and exist only to exploit everything that surrounds us. We are at war with life, at war with ourselves, and at war with this planet in which we live. In the end, can anything be saved?”

Good question. Especially because life is fighting back against us, and holding its own so far against our crumbling lines of defense. 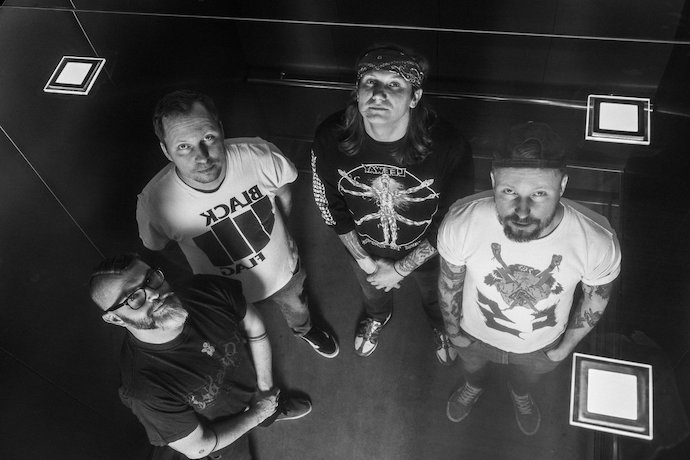 The social issues that Sanity Control address in their new album reflect a hardcore/punk attitude about the wretched state of affairs in the current world, and the music pulls from hardcore as well, melded with thrash to create full-bore Crossover chaos. It’s perhaps ironic that they call themselves Sanity Control, because their music is the kind that makes it easy to lose your mind while listening. And if you were in the pit, you’d probably lose body control too.

The album is going to be released on August 7th by Seeing Red Records in North America and by Selfmadegod Records in Europe. They compare Sanity Control to a lot of great Crossover bands before them – Broken Bones, MOD, and Crumbsuckers, to name a few.

The album’s title track is an explosive display of Sanity Control’s talent. It’s fast, it’s potently groovesome, the vocals are raw and enraged, and the electromagnetic pulse of the riffs is irresistible. The skittering little guitar breaks are great all by themselves, and the hard-thrusting bass lines make a fine companion to the neck-cracking snare beats. If you’re generally pissed off about everything around you, it’s cathartic as hell. And if you mainly just want to blast your cares away and gleefully go nuts for a few minutes, it will satisfy that urge too.

War On Life was mastered by none other than Joel Grind of Toxic Holocaust. It was recorded at Lazy Sounday Studio in Warsaw and was engineered and mixed by Grzegorz Kucharski. The gnarly cover art was created by Raf Wechterowicz, and the logo by Patryk Rosicki, with layout by Marcin Kucharski.

Seeing Red and Selfmadegod are releasing it on vinyl, CD, and digital formats.

3 Responses to “AN NCS PREMIERE: SANITY CONTROL — “WAR ON LIFE””