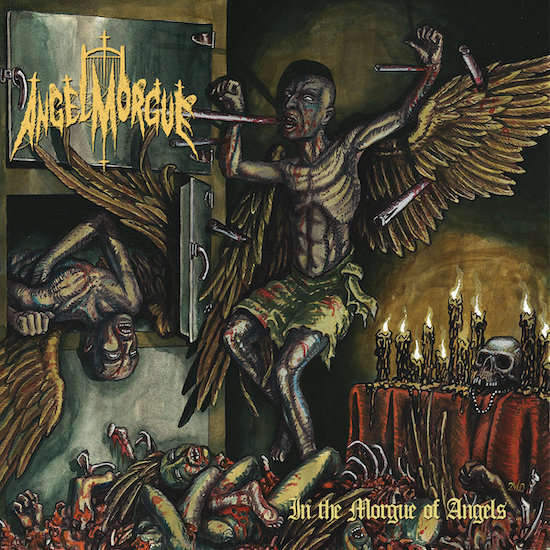 “This release is likely to induce head-banging, living room moshing, raising of the horns, and many invisible oranges and ‘metal’ faces!” That was the enthusiastic message that Redefining Darkness Records sent to the label’s Bandcamp followers yesterday about In the Morgue of Angels, the debut album of the blasphemous New Hampshire quintet Angel Morgue, which RDR will be releasing on August 7th. And as if that come-on weren’t persuasive enough, Redefining Darkness also recommended the album for fans of Incantation, Immolation, Desolate, and Cruciamentum.

I’ve learned through experience that this label’s enthusiasm is genuine, and their taste in metallic extremity dependable. Still, to borrow the unofficial motto of Missouri, I prefer that someone “show me”. And I’ve been shown, in convincing fashion, and now we’ll show you that the words and name-drops above aren’t empty, but very well-founded. To do that we’re sharing today the first single released from the album — the well-named “Cosmic Torment“. 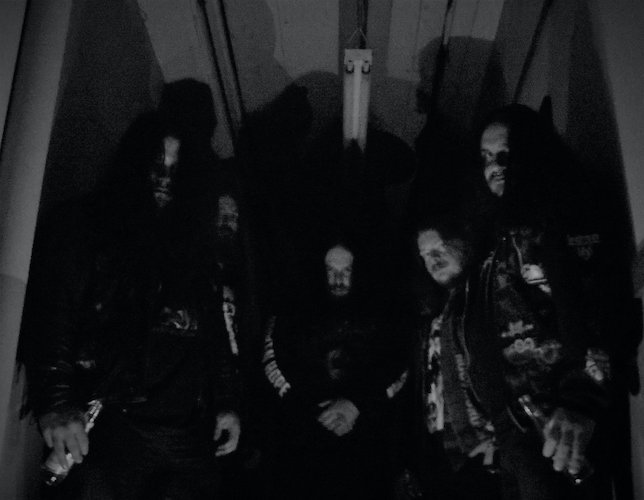 The band have commented about this song: “‘Cosmic Torment‘ is about a lifelong Priest losing faith in God and letting himself be consumed by the thing he used to fight against. The song is a metaphor for no matter how pure someone may be, there’s always evil lurking inside the hearts of man.”

In keeping with its lyrical tale, the song is unmistakably evil, but it will also light a fire in your bloodstream. The opening of the song does that all by itself, thanks to an immediately attention-grabbing drum progression that booms, tumbles, and cracks. That terrific kit-work is backed by a morass of venomously seething and swarming guitar noise, and when the roaring, howling, and shrieking vocals come in, they make the music even more ferocious and horrific.

Having established cavernous death metal as the backbone of the song, the band proceed to augment it with other permutations, including grand and gloomy melodic fanfares, shrill spiraling and freakishly swirling leads, vibrant bass pulsations, and changing drum rhythms. At times the song seems like a mad, exultant conflagration. But with a bass-led bridge, the band also take their foot off the gas and convert the music into a titanic lurching and lumbering golem of doom, a wretched shambling leviathan that moans, groans, and oozes sickness and misery. A wailing guitar contributes to the preternatural mood of these monstrous sensations — which well-suit the tale of a priest who has corrupted himself and become an instrument of evil.

The cover art for In the Morgue of Angels was created by Jef Whitehead (Wrest). Redefining Darkness will release it on CD and digitally, and you can place your orders now: