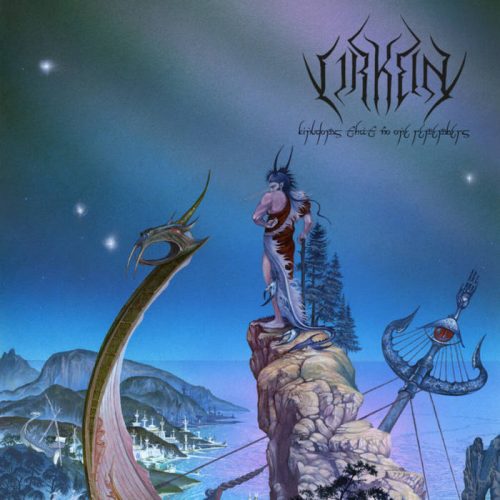 This is a follow-on to another gigantic round-up I posted yesterday, and almost all of the songs and videos below were released during the last five days.

I may have mentioned that although my day-job (which still hasn’t reopened) is in Seattle, I live on an island in Puget Sound. Living here has lots of pluses and a few minuses, one of which is that whenever one of the weather gods so much as sneezes the power and the internet go out, which is what happened this morning.

So, I’ve been using my phone as a hot spot. That has slowed me down, and has made doing this tedious enough that I’ve not only cut back on my words but also largely left these items without the usual purchase links, Facebook pages, and other info about the records. I’ll try to go back and fill all that in when doing it is a less annoying process.

An epic musical narrative, both gloom shrouded and frenzied, melancholy and murderous, haunting and majestic. Seemingly a Tolkein-esque tale told by an orc bred in the subterranean halls of Utumno and raging against his enslavement, the dramatic song blends numerous heavy metal styles to very good effect.

(This is just one song from Cirkeln‘s album Kingdoms That No One Remembers, released on June 4th — and based on this one song I’m eager to listen to more of the new record.)

Technically adventurous, clobbering, crazed, and damned thrilling, this one. Low-frequency mutilation and skull-cracking drum acrobatics paired with roaring vox, viciously grinding riffage, braying chords, freakish arpeggios, and lots of unexpected switching of gears. Looks like Dark Descent has another winner on its hands.

The album that includes the song below is Speciation, set for release on August 7th.

A nihilistic mix of mauling obliteration and hallucinatory oddity — which is itself a mix of bass-grumbling, distant wailing screams, and mercurial wavering tones, which grows in volume and intensity until all hell breaks loose again in a maelstrom of abrasive, destructive noise.

“Language of Molting Cherubs” is a new single that Full of Hell made for the Adult Swim Singles series.

Just keeping you on your toes here, seeing if you’re paying attention. Not metal, but a pungent beat surrounded by spooky and entrancing music. Who doesn’t like a violin made to wail like a poltergeist?

The performers are Dean Mason (music/lyrics/vox) and Damla Bozkurt (violins). This song appears on an album named St. Basil’s Asylum, which was originally released in October 2018 and is now out on Cleopatra Records.

“Plague Superior” is a single that was digitally released yesterday.

You are about to be ingested, by a feeding frenzy of light-speed drum battery, jolting and razoring riffage, scorching screams, and raw roars (with some thuggish grooves to tenderize your meat before consumption, and bits of miserable melody to mourn over your remains).

The album is Where Only Gods May Tread and it will be released by Unique Leader on August 14th.

Here’s a very cool Chariot of Black Moth video for a track off the recently released debut album (Shadow Of Life) by this Jacob Bannon-led “supergroup”. Bleak, harrowing music that simultaneously jackhammers the spine and creates an unnerving mood of emotional fracturing.

This video premiered at Decibel yesterday.

A bone-rattling, furiously ravaging, and neck-ruining assault. Sharply executed barbarity that will light a fire under your pulse, and then quench the fire with an eerie, morbid outro segment (which nevertheless will keep your head in motion).

The song is off Primeval, a new album that features re-recordings of tracks from Venom Prison‘s early EPs, Defy The Tyrant and Primal Chaos, as well as two brand new tracks. It will be released by Prosthetic Records on October 9th.

A gruesome piece of work, oozing the aroma of pestilence and rot at first and then surging into a maggot-swarming gallop segmented by knee-capping grooves, bullet-spitting blast-beats, fast-jabbing chords, squirming arpeggios, and a demented solo. Monstrously good vocals too.

Xenogenesis, the album that includes this new song, will be released by ViciSolum Records on July 24th.