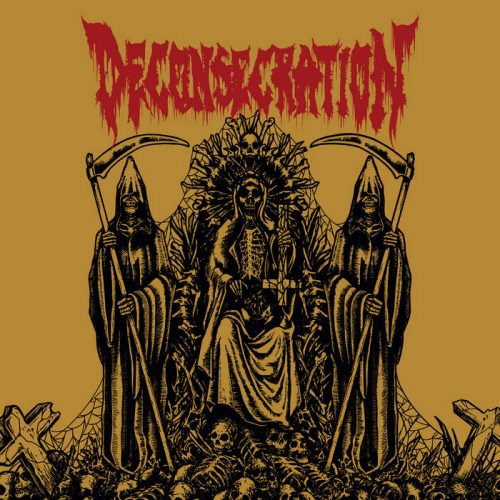 If you’re in the mood for death metal cut from particularly foul and disease-ridden cloth, ghastly in the extreme and gruesome in almost every way, then the debut demo of Deconsecration is just what the mad doctor ordered, to make the sick among you even more ill. We have Chaos Records and Caligari Records to thank for this musical abomination, which they’ve just released on CD and cassette tape, respectively.

This Seattle quintet, whose line-up is composed of ex-members of Capitalist Casualties, Catheter, Wilt, and Hideous Creep and features current members of Foul and Anoxia, were obviously in that mood when they recorded these four tracks. Each of the songs is dynamic in its pacing and variable in its other energies, but there’s nothing about it that’s healthy. On the other hand, it’s very true to the old spirit of death metal that had the stench of the morgue in its nostrils and relished images of reanimated corpses crawling from festering graves. 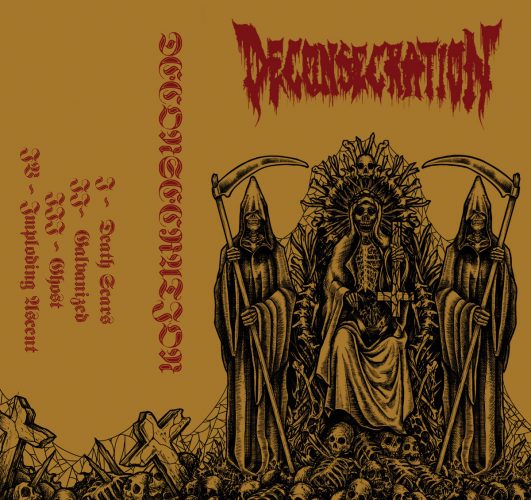 The die is cast with the slow burn of “Death Scars“. Mid-paced and morbid at first, the song quickly creates a poisonously gloomy atmosphere that’s enhanced by cavernous roars and miserable, squirmy leads. Bursts of double-bass and increasingly feverish fretwork slowly bring this dismal cauldron of infection to a boil, with the pace briefly dropping into a ghastly crawl before the music begins to gallop and quiver, with an even more demented solo capping a musical tale of horror.

“Galvanized” incorporates a dynamic lurching and romping momentum. The band introduce a feeling of demented cavorting, but the music is still pestilential even then, and in its slower movements it oozes suffocating oppression and abject misery.

Insectile riffing and a measured snare beat launch “Ghost“, which then segues into a febrile riff that brings to mind visions of swarming maggots, and then a collapse into another rotting-corpse crawl. The song is home to constant changes of pace as well as an eerie, wailing solo, just in case you hadn’t already gotten the shivers before then.

The demo concludes with “Imploding Ascent“, an amalgam of atonal pounding chords and grievously moaning melody, segmented by flares of bass-drum thunder and helpings of buzzing, piranha-like feeding frenzies in the fretwork. The song is infected by an atmosphere of dementia and despair. It erupts in effusions of battering drumwork and fast-jabbing riffage over head-moving rhythms, and all the while that cadaverous voice bellows and howls from the depths of a charnel pit.

Deconsecration aren’t breaking any molds here or attempting to reinvent their chosen sub-genre of macabre, doom-infused death, but particularly for a debut release, they’ve demonstrated a noteworthy talent for bringing this kind of supernatural dread and despair to vivid life. Let’s hope they continue onward in their monstrous mission.

As mentioned earlier, Chaos Records is releasing the Deconsecration demo on CD today, and it’s also now available on cassette tape through Caligari Records, as well as digitally through Deconsecration’s Bandcamp page. It was recorded at Killroom Studio by Jeffrey McNultry and was mastered by Stephanne Loza. It features artwork by Moises Pimentel and layout by Dan Fried.

One Response to “SHORT BUT SWEET: DECONSECRATION’S DEBUT DEMO”