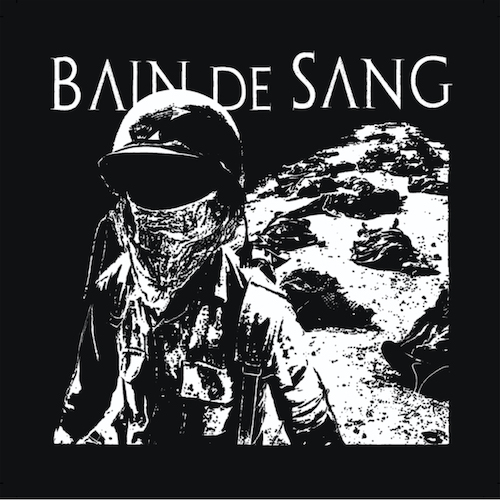 If you’re a fan of such bands as Nasum, Pig Destroyer, Rotten Sound, and Napalm Death, we’ll lay favorable odds that you’re going to eat up Bain de Sang‘s new EP like a ravenous wolf. It takes only 11 minutes for the seven tracks on Sacrificed For A Load Of Filth And Lies to rampage through your cranium, almost too fast to take in, but the EP leaves a powerful impression, and you’ll probably find yourself letting it run riot through your mind a few more times in straight succession.

It’s immediately clear that Bain de Sang know what the hell they’re doing, and it’s not a shock that this Parisian band’s brand of grindcore and powerviolence is so electrifying and addictive because the band’s line-up includes ex-members of Blockheads, Comity, Judoboy, Sofy Major, and Department of Correction. Moreover, they’ve already played at Hellfest and Obscene Extreme, and shared the stage with the likes of Magrudergrind, Primitive Man, Rotten Sound, Gadget, Cloud Rat, Fuck the Facts, and Harm Done.

The EP will be released digitally by Terrain Vague as a name-tour-price download this Friday, July 3rd, which gives you another opportunity to take advantage of Bandcamp’s waiver of their revenue share on music sales if you want to make a donation. And people who prefer physical editions can also order them from Terrain Vague, who plans a release date of September 4th for those. And to make those decisions very easy, we’ve got a full stream of the EP for you right now. 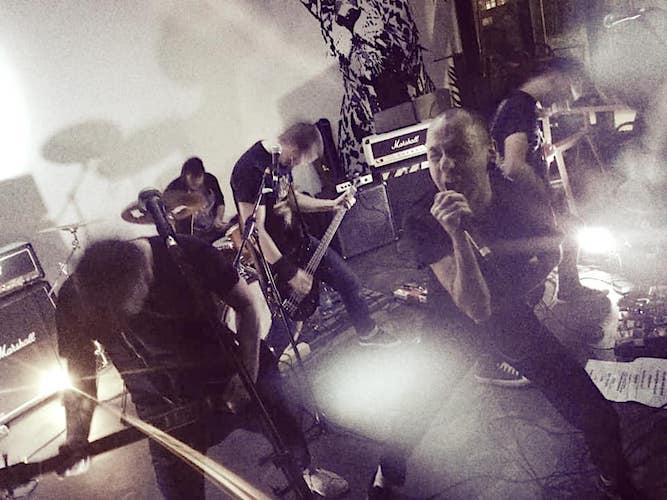 These seven tracks may be short, fast, and loud, but they’re not an undifferentiated mass of noise. Far from it.

“Death Trap” is marked by maniacal snare-drumming at a furious pace and by a swift array of braying, heaving, pulsing, and head-smashing chords, laced with bursts of feverish fretwork and set on fire by screams of eye-popping intensity. It makes for an explosive and obliterating introduction to the EP, a big jolt of adrenaline to kick things off.

The high intensity of that opening song is a mainstay of almost everything else, but Bain de Sang nevertheless give every track its own distinctive personality — even if they’re all frequently unhinged. “No Guillotine No King” is slightly more mid-paced in spots, and more bleak, thanks in part to bits of despairing melody, though no less ferocious, while “Cloudburst” is a real bruiser — though also crazed and carnivorous — and the vocals are a screaming and howling terror.

A snapping snare and gravel-chewing bass provide the intro to “Fear The Cross“, which then morphs into an amalgam of hammering grooves and freakish riffing, the notes darting and boiling, with blasts of brazen melody in the mix. “Terror” erupts in another display of jet-fueled mayhem but drops into a bunker-busting, neck-wrecking breakdown that’s not soon forgotten.

On the other hand, in “31G” a dose of abrasive noise forms the prelude to a punk stomp fueled by heavyweight, jackhammering riffage and gunshot snare beats. It’s probably the most relentlessly head-bangable track on the EP, but also includes soaring and searing leads that give this spine-shaker an aura of triumph.

Bain de Sang close the EP with an Outro (featuring Philemon Girouard) that’s markedly different from what has come before. It proves to be mystifying but mesmerizing. It consist a cappella chants and sung vocal harmonies that are then backed by electronic noise which comes across as a collage of low growls, skittering mania, and persistent pumping tones.

So in short, if you’re in the mood for high-grade grindcore spliced with powerviolence, d-beat, and crust, this will give you a terrific fix.

Sacrificed For A Load Of Filth And Lies, like the band’s first release (2015’s We Are The Blood, We Are The Fear), was produced at TOTA Studio by Jean-François Di Rienzo, and it has a tremendously powerful sound. Pre-order now: