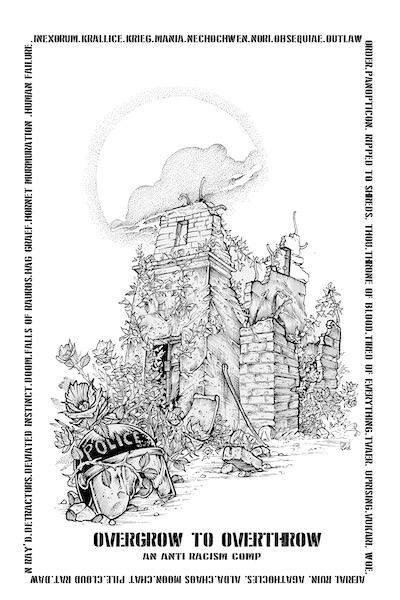 July 3rd will be another day when Bandcamp waives its share of revenue from sales of music on the site. On that day 30 bands from across the world of extreme music will release a digital-only compilation designed to add their voices to the struggle against systemic racism and police brutality and to raise money in support of those causes, with all proceeds donated to racial justice organizations, including Black Lives Matter and Life After Hate.

The compilation is named Overgrow To Overthrow, and it will be released tomorrow through the Bandcamp page of Bindrune Recordings. It features artists as varied as Doom, Panopticon, Obsequiae, Agathocles, Thou, Chaos Moon, Outlaw Order, Deviated Instinct, Dawn Ray’d, and many others, who have provided a collection of brand new tracks, cover songs, remixes, live cuts, and re-recorded tracks.

It provides an opportunity for metal and punk fans not only to add a lot of great music to their collections, but to do it in a way that provides money to worthy causes at a time when the contributions can be maximized by taking advantage of Bandcamp’s waiver day. We’re supporting this effort by helping to spread the word about it. Below you’ll find statements about the comp from the people behind Overgrow To Overthrow along with more details about the music and how to get it.

First, here is the official statement released by Overgrow To Overthrow:

“Too many of us have sat back and watched, or looked away, as faces in our communities were wiped from history; disproportionately affected by police violence and systemic racism. Too often we have seen our Black, Brown, Native American and First Nations brothers and sisters killed through unnecessary police violence. While this has become an international issue in the last few months, racism has been a fact of daily life for millions around the world.

“Voices from across the Metal and Punk spectrum have united to not only speak out against racism and in support of those who are in the streets actively demonstrating, but work to actively support a fight all of us must take on.

“We feel that the time has come for members of the Metal and Punk scenes to offer material support to the struggle against racism and for equality, engaging with our brothers and sisters in the streets who are out in front of the conversation against pervasive prejudice and systemic racism. While many of us are in the streets supporting these causes it became apparent that we could amplify the voice of those who are most at risk by using our platform as musicians.”

In addition, the following was provided by one of the artists featured on Overgrow to Overthrow, and clearly outlines why the participants in the project are doing this:

“I am a person of color who lives in Minneapolis and a featured musician on this compilation.

“I love this city and its culture, but it would be dishonest not to acknowledge the segregation that still permeates this city. I see it in a geopolitical sense, but also in the hearts and minds of people I speak to here. The death of George Floyd has filled us all with grief; everyone other than those with the most extreme racist beliefs can watch the video and immediately recognize it as a comprehensive moral failing.

“With that in mind, I want to emphasize that George Floyd’s death is not an anomaly, and that the problem exists on a larger scale than whether four particular Minneapolis police officers are convicted. This same incident plays out at least once a week somewhere in the United States, and it is usually not brought to national attention like this. The outrage is usually less vocal because there is some plausible deniability: the video shakes or wavers for a second and we can’t quite see what happened, or the victim yelled something threatening, or the police told the bystanders to stop filming, or sometimes the body cameras are turned off, or sometimes there simply isn’t footage at all. But it is happening in our world all the same, and what we all saw transpire on May 25, 2020 is an uncensored vision of the culture we have created.

“If I could ask one thing to everyone who would listen, I would say: the next time this happens (and it will happen again), will we allow our friends and colleagues to follow the beaten path of preying on the deniability, steering the conversation toward the deceased’s criminal history and asking whether they were on drugs or trespassing or didn’t put their hands up fast enough? Will we play that role of devil’s advocate ourselves, even while knowing that we are defending an institution of immense power, whose labor union will all but guarantee its officers stay out of jail, keep their jobs and receive back pay regardless of whether they have committed a wrong? Or will we dare to question the status quo, even when the cameras aren’t rolling, and lend a voice to our fallen fellow man who no longer has a voice to tell his story?

“How we answer this question will shape our communities for generations. If we don’t answer correctly, I believe the worst may be yet to come.”

And now, a few more details about the release, which includes an array of Black Metal, Death Metal, Grindcore, Crust, Sludge, and Hardcore:

All proceeds from sales of the comp will be donated to these organizations, and potentially more to be identified:

Black Lives Matter – Over-arching movement to combat racism and fight for social justice in the US and Canada.
Life After Hate – A nonprofit in the US that seeks to combat racism by providing resources to help people leave racist movements, as well as help de-radicalize violent Far Right extremists.

The comp will be launched on the Bandcamp page of Bindrune Recordings on July 3rd, so circle that day on your calendar, or write it on your hand, or stencil it into your forehead so you don’t forget, and go here on Friday to do yourself and some valuable organizations a favor:

UPDATE: And now, here’s the full stream of all the music:

3 Responses to “OVERGROW TO OVERTHROW: AN ANTIRACISM COMP”