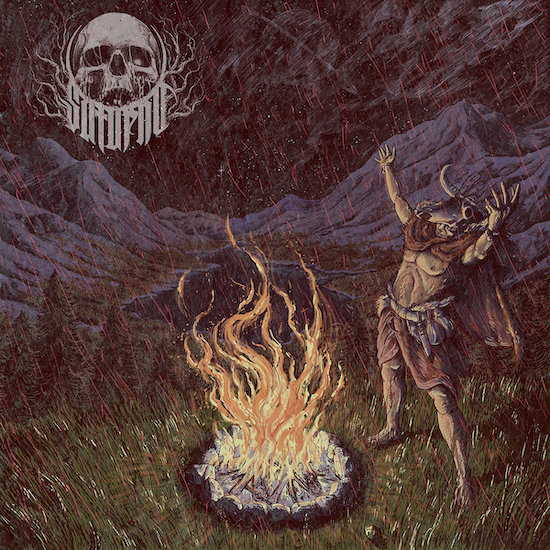 (Here’s Andy Synn‘s review of the new album, released on May 30, by the Chilean band Saturno.)

And while the majority of coverage still focuses on bands from Western Europe and North America, we’re seeing more and more music from Africa, Asia, and Central/Southern America breaking through every year, reinforcing the fact that the love of the riff transcends all national boundaries.

With that in mind, today’s trip takes us to the West coast of South America to dance around the fire with Chilean Death/Doom quintet Saturno. 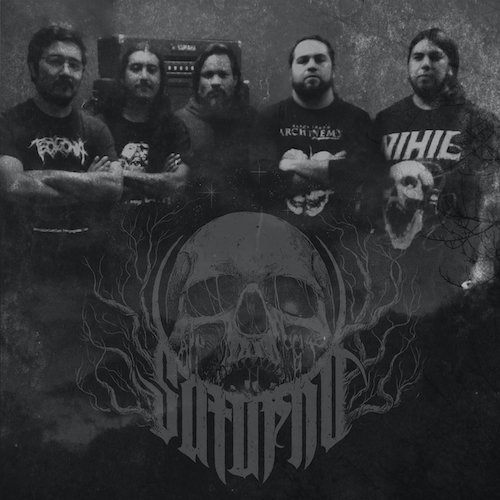 First things first, I’d like us all to take a moment to appreciate both the album’s gorgeous cover art and the band’s exceptionally cool logo… I know you’re not supposed to judge a book (or a record) by its cover, but the group’s visual aesthetic is a big part of what initially prompted me to check them out.

Secondly, it’s worth noting that tagging the band as Death/Doom might give slightly the wrong impression. While there’s obviously a fair bit of early My Dying Bride and Paradise Lost in the band’s DNA, the true core of Menhir lies closer to the Doom-tinged Death Metal of bands like Asphyx or Hooded Menace – with maybe even a dash of Incantation’s crushing density and Celtic Frost’s gargantuan grimness – than it does the gothic melancholy of the Peaceville scene.

Opener “Death on Hold”, for example, is an eight-minute death-dirge of bone-grinding riffs and gargling gutturals which builds towards a darkly melodic second half highlighted by a wicked, wah-drenched solo and a punchy, percussive finale, after which the eponymous “Saturno” begins and ends with a mesmerising display of moody melody, between which the band deliver a punishing plethora of ragged riffs, colossal chords, and seething tremolo.

In fact, the more I think about it the more this combination of chunky, churning Death Metal riffage and gloomy, doomy vibes reminds me of dearly-departed distortion-dealers Vallenfyre, albeit with a much less crusty, and subtly more blackened, approach.

This latter element becomes more apparent the deeper you dig into the album, rearing its head during the hypnotic, blast-driven refrain of “Fire In The Sky” – a song which balances aggression and extremity with an undercurrent of suffocating dread – and then really making its presence felt during the twining tremolo segments of “Espíritu Viviente”, which provide some sharp dynamic contrast to the song’s brutish, chugging riff work and poignant passages of sombre, slow-burning melody.

Saving the best for (almost) last, “Avalanchas” is just over five minutes of ominous, prowling grooves, bleak, sinister melodies, and writhing tremolo runs that positively bristles with doomy hooks, deathly aggression, and blackened intensity, after which the rumbling, rain-drenched riffs and soaring leads of “Mente Indómita” take the album on a well deserved victory lap.

A perfect example of why it pays to expand your horizons and look a little bit further afield, Menhir is exactly the sort of hidden gem that this site was created to uncover, so make sure you give it a listen at the earliest opportunity. Who knows, you might just discover your new favourite band!