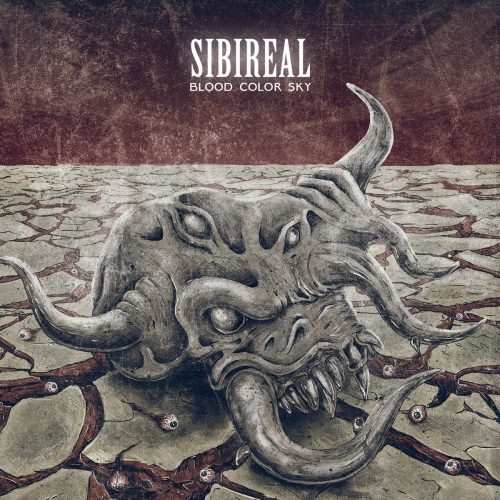 As many of you know, we have a year-end list that’s devoted to highly infectious extreme metal songs. The song we’re premiering today from the debut album of Sibireal quickly jumped onto the candidate list — and not just this one, but another song that was the first track excerpted from the album. Today’s song is “Symbols“, and the one that preceded it is “The Way of Ego”.

The title of the album is Blood Color Sky, and it’s set for co-release on August 8th by the Ukrainian label GrimmDistribution (a label partner of Satanath Records) and the Russian label Wings Of Destruction.

Sibireal are themselves based in Russia, in the foothills of the Altai mountains, which The Font of All Human Knowledge tells us is “in the very center of Asia at the junction of the Siberian taiga, the steppes of Kazakhstan and the semi-deserts of Mongolia.” And thus perhaps it’s not surprising that although the musical backbone of Sibireal is thrashing black metal, their music sometimes includes the Altai harp, tambourines, and throat singing.

Blood Color Sky is produced in a way that gives the music a relatively clear and cutting immediacy, but without shining it up too much (as the labels say, it still has a “rude and careless sound”) and without sacrificing the physically compulsive heft in the low end. And “Symbols” really will get you moving.

The song proceeds with a mid-paced, stomping momentum. The riffing creates a grim, threatening, and imperious feeling, but it’s laced with bursts of crazed fretwork, and the vocals are utterly unhinged, the kind of spine-shivering screams of a man who seems to be turning himself inside-out through sheer force of will.

The music has a primitive, vicious atmosphere — a mixture of cruelty, ebullience, and hints of sorcery. And it’s undergirded by potent drum-and-bass rhythms that make it prime fuel for vigorous headbanging, even when the riffing becomes a jabbing, scissoring force and the lead guitar ejects spurts of demented shrieking tones.

That previously released song, “The Way of Ego“, which is free to download at Bandcamp, is less grim and menacing and more ecstatic, and while it’s an electrifying, whirling experience, there’s a grand sweep to its melody, and a feeling of awe as well as madness that courses through it. The song is also home to a riveting dual-guitar solo, terrific bass work, and of course the shattering wildness of the vocalist’s screams.

Blood Color Sky consists of seven original tracks and a cover of a song by Fatal Energy. It’s recommended for fans of such formations as Rossomahaar and Tsygun.

GrimmDistribution and Wings Of Destruction will release the album, adorned with cover art by Mosa Eye, in a Digipak CD edition limited to 300 copies, with an 8-page booklet, and it’s available for pre-order now.

One Response to “AN NCS PREMIERE: SIBIREAL — “SYMBOLS””