(This is TheMadIsraeli’s review of the debut album by Forlorn World, the side project of Bloodshot Dawn‘s Josh McMorran.)

I’m a rabid fan of Bloodshot Dawn and have been since their self-titled debut.  I own all their releases physically, I still listen to all three of their albums to date at least once a month, and I think in general, in a current era where melodic death metal has really fallen off the map, they have somehow managed to inject some needed life into an otherwise dormant sub-genre of extreme metal that was beloved by many.  Mostly this was done through an elevation of the technicality of riff writing combined with an EXTREME emphasis on guitar virtuosity.  Their formula works, and it’s some of the most consistently compelling metal you can listen to right now.

I was therefore quite intrigued when I learned that Bloodshot Dawn founder and frontman Josh McMorran was using this quarantine time to record a solo album as kind of an aside to Bloodshot Dawn, maybe to just hone his musical chops a bit more or to prepare for the fourth Bloodshot Dawn album, but I was curious nonetheless.  This project, the subject of today’s review, is called Forlorn World, and I mean… it’s pretty fucking good. 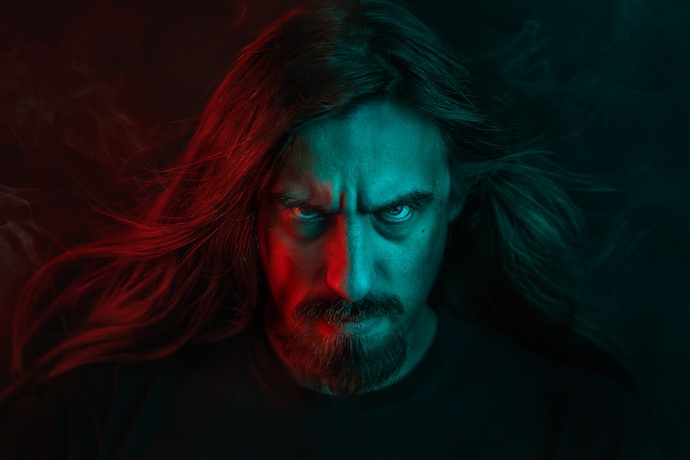 Umbra takes the skeleton of the sound of Bloodshot Dawn, but it also gives McMorran additional room to experiment in ways he has no apparent intention of doing with Bloodshot Dawn.  There’s clean vocals on this album, for example, something that’ll never see light in Bloodshot Dawn by his own word, but it also adds a new layer to the music.  I feel like what’s going on in Umbra is very much a mix of Bloodshot Dawn’s self-titled debut, with its massive riffs and epic scale, combined with Reanimation and its focus on more straight death metal.  It’s a pretty short burst of music, just hitting the half hour mark, but it’s an effective seven-song collection that I’m thoroughly enjoying, and I think anybody who likes Bloodshot Dawn will love this just as much.

The other impressive feat of this album is its production job, done by McMorran himself with assistance from none other than Jacob Hansen of Invocator fame.  You can definitely hear it, and if this mix-style is what future Bloodshot material will be covered in, it’s the best possible sonic fit for their music.

This album doesn’t come out for awhile, but I felt it was time to write the review so as to roughly coincide with the release of its first single, which we premiered here late last week (and check that out if you want to learn a lot more detail about what inspired this album and how it came about).  Definitely keep an eye out to snag this in the future if you’re already a fan of Bloodshot Dawn — or even if you haven’t yet fallen for that band.

I’m around by the way. Quarantine life has derailed any sense of organization or schedule of mine, but I’ve got more reviews and other pieces coming down the pipe.  I promise.

Umbra will be released on October 15th on Bandcamp and on October 30th on all major platforms in physical and digital format.