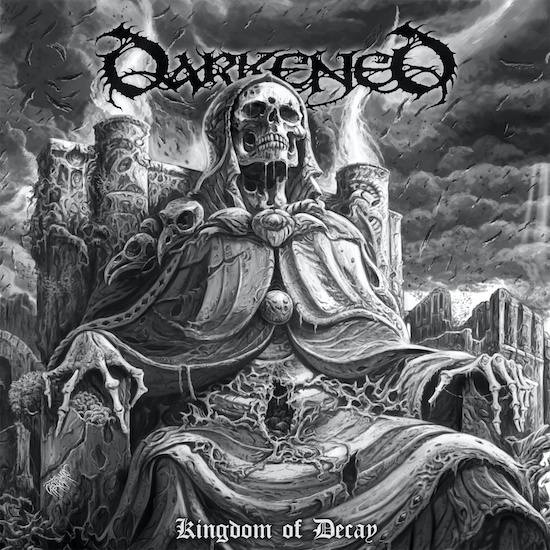 The term “supergroup” is over-used and sometimes not entirely accurate, but it does come to mind in the case of the multi-national death metal formation Darkened. At a minimum, no one would dispute that the band is rich in experience and with a line-up pedigree that’s immediately impressive. Darkened‘s collective resume certainly played a role in drawing the attention of fans to their 2019 debut EP, Into the Blackness, and then the music on the EP did the rest of the job, proving that the band’s members were earning their accolades all over again and intensifying interest in what they might do next under the Darkened banner.

What they’ve done next is a debut album that will be released by the same label that helped usher that EP into the world — Edged Circle Productions. The imposing title of the full-length is Kingdom of Decay, and it will hit the streets (like a warhead) on September 11th. One electrifying song from the album is already out, and now we’re presenting a second one that’s perhaps even more dynamic and multi-faceted but no less adrenaline-charged. 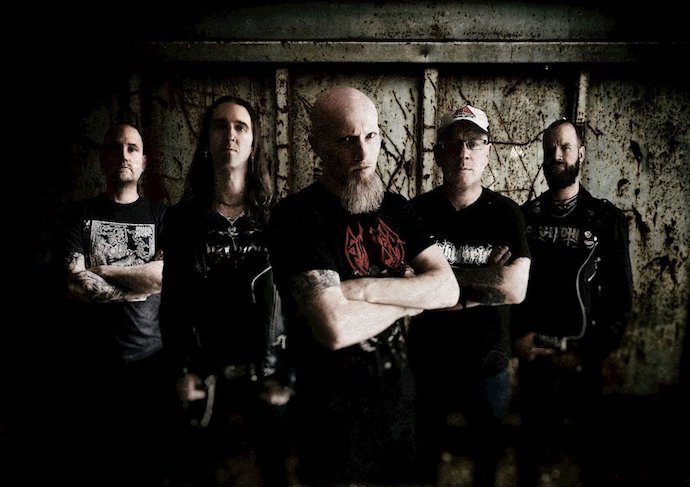 There has been a slight line-up shift since the recording of the 2019 EP, and the band that recorded the debut album consists of the following:

In the music of Kingdom of Decay, you can detect the influences of the members’ other current and former bands, and you can also detect the advances that the album has made over the debut EP, despite how impressive that first effort was.

“The Burning” was the first song presented to the public from the new record, and it’s not hard to understand why it was chosen to lead the way. It begins in an ominous and stately fanfare of sound that unfolds with symphonic grandeur, but is combined with monstrous growls that are a portent of the savagery to come — and it comes soon, as the music transforms into a vicious frenzy of hammering drums and darting, cutting riffage.

The song’s overarching symphonic sweep persists but becomes more eerie and alien, and the band inject doses of cruel, jabbing chords and jackhammering percussion. The song soars but simultaneously attacks with maniacal savagery as Gord Olson‘s powerhouse voice itself soars in howls of rabid fury. The pacing of the song is turbocharged and heavy-grooved, and the soloing is wild and wondrous, a fret-melting spectacle of frenzy and fire that helps propel the song to further heights of menacing and majestic extravagance.

The song we’re presenting today, “The Old Ones‘, immediately creates a contrast with that previous track. Its initial pacing is that of a mid-paced, bone-smashing stomp, and the melody is an amalgam of moaning misery and wailing anguish. You can feel the fever beginning to build, and then the music erupts in a surge of skull-cracking drumwork and writhing, darting fretwork. A feeling of despair persists, but the spine-splintering grooves and boiling tremolo’d chords create an equally vivid atmosphere of unchained savagery, and Olson‘s vocals are as ferocious and barbaric as ever. Near the end there’s a solo in this one, too, but it re-introduces that opening feeling of emotional desolation — albeit with an otherworldly resonance that spawns images of ghostly spirits lost in a realm of pain.

Darkened are establishing once again that they’re an immensely powerful death-dealing unit, using a combination of talents already proven in other projects to create music that’s stunningly crushing, frighteningly thrilling, atmospherically dominating, and riveting in its dynamism.

The record’s sound also achieves a fine balance between bludgeoning power and knife-edged clarity. Credit goes to Tobbe Sillman (General Surgery) for the mixing, and to the great Dan Swanö at Unisound for the mastering, and the terrifically ghastly artwork (which is an excellent interpretation of the music) was created by Juanjo Castellano Rosado (Unleashed, The Black Dalhia Murder, Gates of Ishtar).

Edged Circle Productions is offering the album in a variety of formats, and you can choose among them here:

3 Responses to “AN NCS PREMIERE: DARKENED — “THE OLD ONES””