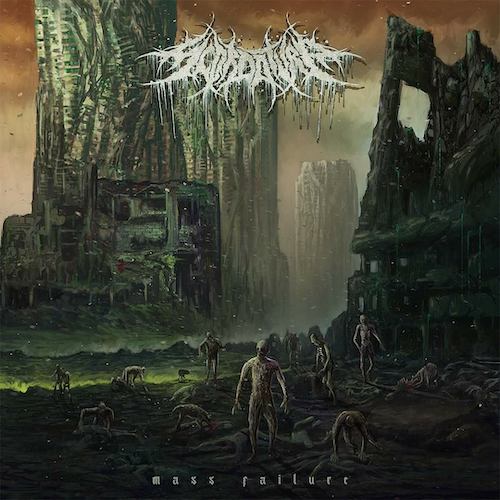 On September 25 Gore House Productions will release Mass Failure, the third album by the Scottish death metal band Scordatura. We expect neither delicacy nor mercy, but instead the kind of brutish and blistering treatment that our pathetic world so richly deserves. Based upon the first single from the album that we’re premiering today, “Disease of Mind“, those expectations will be fulfilled.

Where did those expectations come from? Let’s remind you: 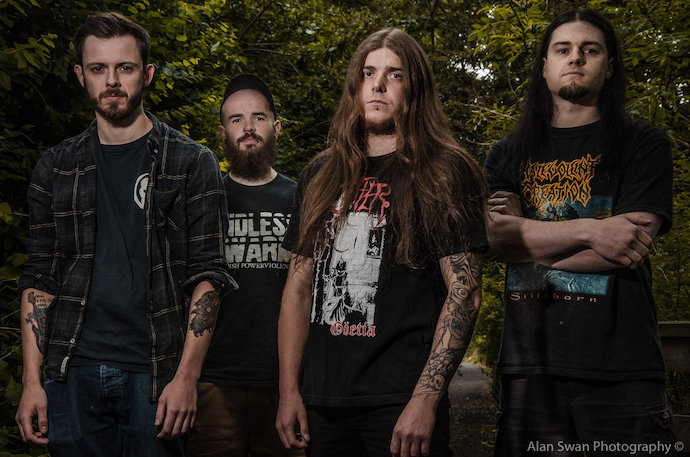 We wrote this about the band’s 2013 debut album, Torment of the Weak:

“Let your mind turn to the idea of a blender filled with scoops of Hate Eternal, Suffocation, Dying Fetus, and Origin, set to puree . . . though it may be your brain that gets pureed. Scordatura twist and turn and slice and dice in a whipping fury of technically oriented brutality. And by ‘technically oriented’, I don’t mean a flurry of prog-minded note-wanking. I mean the whirring teeth of a meat grinder turning slabs of beef into finely carved tartar. It’s raw, red, and delicious.”

And we wrote this about their sophomore full-length, 2017’s Self-Created Abyss, which we premiered:

“This Scottish band have planted themselves at the crossroads where brutal death metal and technical death metal intersect. They manifest the insectile, skittering frenzy of a band like Deeds of Flesh, the technical ferocity of a Cryptopsy, and the near-atonal bludgeoning of a band like Dying Fetus. They grind, and eviscerate, and smash with red-eyed determination, part brute-force bone-crushers and part piranha swarm attacking a bleeding carcass.”

You get the idea? And if that weren’t sufficient warning, we’ll share this comment from Scordatura about their newest full-length:

“The album has been in the works for over 3 years now and we’re more than happy with the results. We feel we’ve taken the best elements from Self-Created Abyss and built on that to write a well-balanced album of Speed, Technicality & Groove. We decided to go for more of a ‘real life’ take on the lyrics, with how corrupt and how fucked up the world is. Our thought process in this was if we write about relevant and real life problems then people can potentially relate more to the music. We feel this is our strongest material to date and hopefully it will reflect on the music.”

With these preludes in place, let’s now consider “Disease of Mind“.

Until near the end, the song is fast — really fast. As expected, even vocalist Daryl Boyce ejects his growls, shrieks, and gagging sounds like bullets spitting from a machine-gun. But he has to do that, in order to keep up with drummer Tam Moran‘s turbocharged kitwork, Owen McKendrick‘s hyper-active riffing, and bassist Derek Wright‘s full-throttle string-slinging. The music creates a feeding frenzy of bestial savagery, which leaps back and forth between maniacally jittery guitar vibrations and bursts of mangling, war-zone-like mayhem. But, also as expected, the band splice the song with bone-busting grooves, some of which sound like jackhammers at work and others like crowbars applied to the back of the neck or the detonation of bombs.

Near the end, the band signal an approaching breakdown, and when it happens the song becomes not merely slower but also more brutish and cruel. As it jolts and seethes, the music creates a dismal and dreadful feeling — a punishment of the soul to go along with the preceding punishment of bone and flesh.

3 Responses to “AN NCS PREMIERE: SCORDATURA — “DISEASE OF MIND””