The last 10 days have been rough. I mentioned last weekend that the virus had claimed the life of someone I was very close to, and my day job has simultaneously become very demanding. The combined impact has stressed my work at NCS. Just haven’t had the time or mental health necessary to plow through all the new music that is somehow still managing to come out.

For the first time in an unusually long time, I did do some updating of my out-of-control listening list yesterday, and checked out some of the more recent entries that I thought might be suitable for this column. I also re-listened to a few things I’d intended to write about before calamity struck. From those excursions I made selections that I’ve divided into two parts. The way I divided the groupings makes musical sense to me, but who knows if it will make sense to anyone else. Part 1 includes individual songs and videos; there are a bunch of full album streams in Part 2.

My memory is spotty at the best of times, but I’m pretty sure that at least once before here at NCS I’ve mentioned that Rotting Christ were the first band who opened my eyes to black metal. That was about 13 years ago. Before that I’d dabbled a bit in the genre but wasn’t hooked, and then I discovered Theogonia, and the rest is history. Speaking of history, after being wowed by Theogonia I traveled further back and listened to some of RC‘s earlier output, including 1994’s Non Serviam, whose opening track was a song named “The Fifth Illusion“. 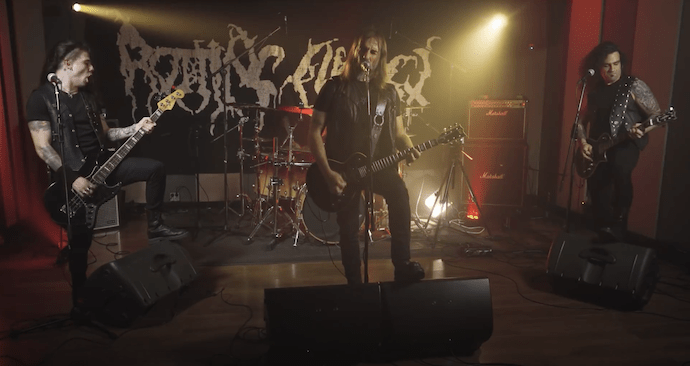 Others have noted, and I agree (though it’s still a controversial assertion), that Non Serviam was really the album that began to establish Rotting Christ‘s distinctive sound – not their best album, but one that to this day is much more than an historical relic. And so it was great to see that last week Rotting Christ released a video of themselves performing that album opener “The Fifth Illusion“. They did it in a studio, of course, rather than on a stage in front of a throng. The notes to the video say that it was created for a live streaming event hosted by Mexico Metal Fest, which I unfortunately missed.

I have to say that in my enfeebled emotional state, this was just what I needed — the heft and punch of the rhythms, the blazing defiance of the riffing, the spectral accents of the keys, the unmistakable sound of Sakis‘ voice, and the opportunity to see that he and Themis are alive and well. (Forgive me for getting nostalgic and sappy, especially in a column devoted mainly to black metal, but I can’t help it.)

I thought it made sense to follow that Rotting Christ video with this next one, because the band have toured with Rotting Christ, Sakis himself has said good things about them, and the song also seemed to flow well from “The Fifth Illusion“.

The band is Raven Throne from Belarus, and their discography is now six albums long (with many shorter works also on the list). The song in the video is the title track to their next album, Viartannie, which will be released on September 18th.

In the music we get ritual flute and grim riffing, a heavy bass thrum and pummeling blast-beats, scorching screams and detonating booms. The riffing gets its hooks under the skin as it rises and falls in dense repeating waves. The band also segue into rocking cadences, with the bass providing a powerful compulsion, though the mood remains as bleak and beleaguered as the barren trees and their dark roots. 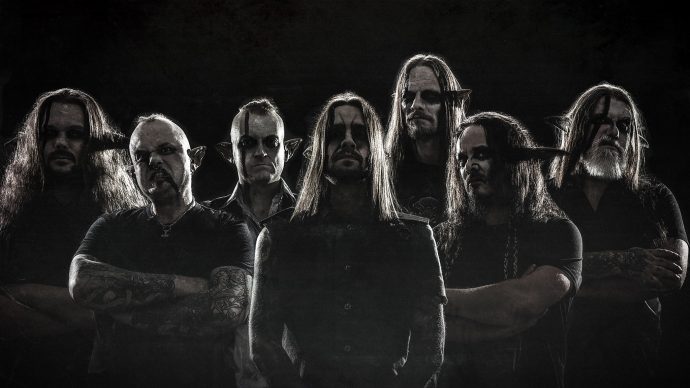 The nostalgia trip I began with that Rotting Christ video continues with this next song from a band I’ve dearly loved for a very long time, and one we haven’t heard from in roughly seven years, so theirs is a very welcome return.

The return of Finntroll comes through a new album named Vredesvävd, and the first advance track is “Ormfolk“, which seems to have inspired memories of 2001’s Jaktens tid among many fans. “Catchy melodies, furious speed, and the rabid black humppa” — those are some of the band’s own descriptive references to the new song, and yes indeed, it does make one want to humppa ’til it hurts. The song bounces and swirls, jitters and jigs, gets the blood pumping and sticks in the head. It brings Dionysian wildness, but it’s a sinister romp too, as it should be.

Vredesvävd will be released by Century Media on September 18th. 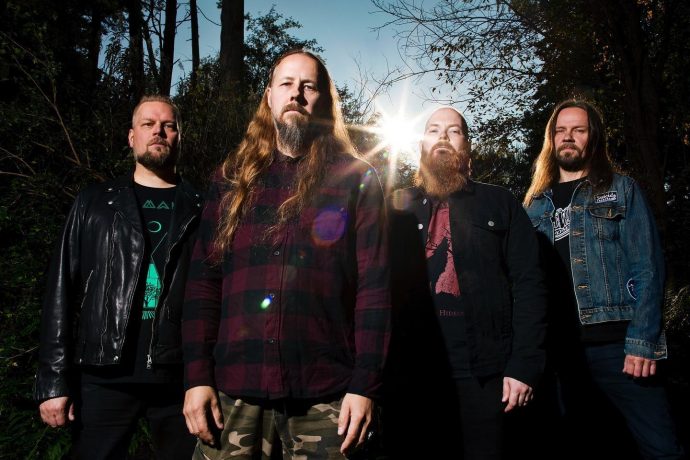 I’ve made no secret of my attraction to Finland’s Black Royal, and so I was immediately drawn to the video for “Gods of War” that came out last week. The band’s vocalist Riku has explained:

“We heard that one can find echoes of Mastodon and Kvelertak in this song and it suits us just fine as both are fantastic bands! The lyrics are inspired by the Vikings TV series and a war between paganism and Christianity. Without the clergymen nobody would talk about the Devil. The Devil as we know it exists only in Christianity. Pagans do not have a Devil – they have Spirits which were good or bad according to how one lived and got along with them. In the middle part of the song there’s an old Finnish witch song which suits perfectly with the mood and honours the Finnish pagan cultural heritage.”

True to Black Royal‘s strengths, the song punches with lead-weighted heaviness, and the chugging, braying, and buzzing riffs (together with the rocking rhythms) are made for movement, yet it’s also a menacing and diabolical beast. When the full-bore physical thrust briefly relents, the moody melody and the vocal change does enhance the memories of Mastodon.

“Gods of War” appears on the band’s new album Firebride, which is out now on Suicide Records.