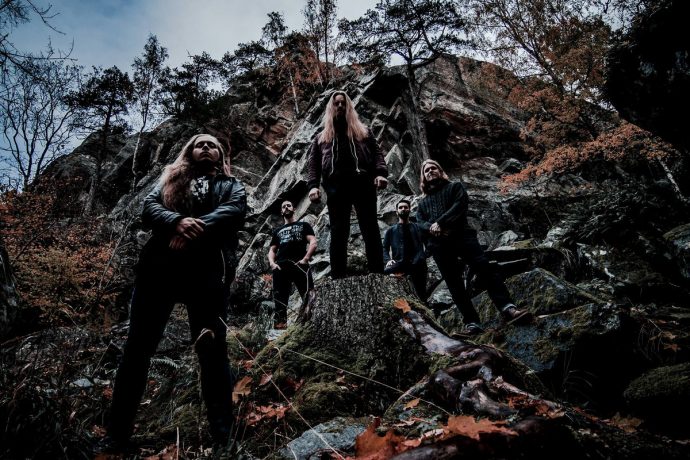 (We’ve reached the end of July, and for this month’s edition of THE SYNN REPORT Andy Synn has prepared reviews of all the albums released by the Swedish band Descend, including their latest full-length released on June 26th by Aftermath Music.)

Stockholm stunners Descend have been quietly making a name for themselves in the more progressive circles of the Death Metal underground for a while now, developing a well-deserved reputation as a reliable source of intricate instrumental arrangements and rock-solid riffs that deliver all the primal punch you desire while also engaging your higher brain functions with every dynamic twist and turn.

But, for whatever reason, the Swedish quintet have never really broken through into the wider Metal consciousness in the same way that a number of their peers and predecessors have managed to.

All that might just be about to change however, as their recently released third album, The Deviant, is both a major step up for the band and a potential contender for multiple “Album of the Year” accolades.

Before we get to that, however, I invite you all to come with me on a deep dive into the group’s discography, where you’ll find that there’s also a lot to love in the band’s back-catalogue too. 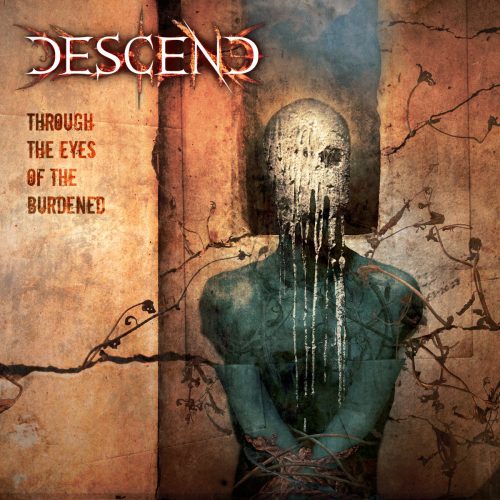 Unsurprisingly, the band’s first album found them still a little rough around the edges (especially when compared to the seamlessly integrated Prog-Death powerhouse they’ve become since then) but still exhibits a certain amount of charm, as well as some hearty ambition, over the course of its forty-three minute run-time.

From the crisp, clean-picked intro of “Ascent to Obscurity” to the taut, choppy outro of “Descend to Oblivion” (displaying some nice conceptual and sonic symmetry in the way the two mirror one another) it’s clear that Descend have a fair bit in common with their brethren in Opeth (they even share the same home town), showcasing a similar penchant for blending punchy riffs and complex, proggy fretwork with passages of sublime, soaring melody and intricate acoustic instrumentation.

However, there’s also a more obvious Death influence (drawing particularly from the band’s later years) on tracks such as “Among the Ruins” and “The Life Delusion”, which occasionally swings the band’s sound towards the more showy, Beyond Creation, style of Progressive Death Metal (especially in those moments where the bass and/or lead guitars are given the spotlight).

Still, it’s the more Opeth-ian moments which have the biggest impact (especially now that Akerfeldt and co. have largely moved on, leaving a lot of people looking for something to fill that hole in their lives), from the brilliant back-and-forth between rippling acoustic notes and rumbling riffs which makes up “A Sudden Sense of Clarity” to the dark, doomy overtones and morose, moody melodies underpinning “Disambiguous”.

The band save their very best for right near the end however, with the dynamic duo of “Through the Eyes of the Burdened” and “Mask of Demise” demonstrating that Descend are already on their way to being masters of their craft.

The former is just over eight minutes of poignant, proggy lead melodies, sombre (if slightly tremulous) clean vocals, tight, rhythmic riffage, and sharp-tongued snarls, all woven together in one elegant, eloquent tapestry of light-and-shade songwriting, while the latter is not only the darkest, heaviest track on the record, but also, at certain points, its most nuanced and melodic.

A fine start and a firm foundation, Through the Eyes of the Burdened is a fascinating glimpse of a band who had not yet become more than the sum of their parts, but who were already showing signs of their potential to do so further down the road. 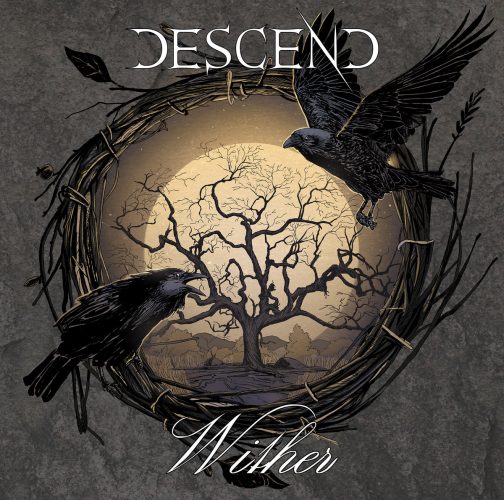 Released just a few short years after their debut album, the band’s sophomore record found them raising their game in practically every aspect and facet of their performance.

With a bigger, bolder sound, and an even greater sense of confidence, opener “Confined By Evil” (which is significantly more intense than anything found on Through the Eyes of the Burdened) hits the ground running in a near nine-minute display of chunky riffs and winding leads – interspersed here and there by fleeting moments of calm – all topped off with some strikingly aggressive vocals (singer Nima Farhadian having clearly spent a lot of time expanding both his range and power) and underpinned by some attention-grabbing (though not focus-stealing) bass and drum work.

The band keep this early momentum going with the driving riffs and dramatic twists of “The Rancorous Paradigm”, whose dense rhythms, scrappy snarls, and proggy lead parts remind me of a more deathly version of Ihsahn’s solo work, after which multipart metallic masterpiece “In Hours of Despair” recalls the agility and aggression and melodic brilliance of Ænigma-era In Vain (which is high praise indeed).

The album’s mid-section is, arguably, not quite as strong as its impressive start – “Severance” is a solid piece of riff-driven (Melodic) Death Metal, while the title track is a teasing two-and-a-half minute instrumental drawn straight from the Blackwater Park school of bleak beauty – but things quickly pick up steam again with doom-laden, dissonance-edged riffs and menacing melodic lead lines of “Diabolic”, which builds, over the course of eight malevolent minutes, to one of the record’s most extravagant and shamelessly proggy moments.

This is followed in turn by “From Grace to Grave”, where the group’s intricate interlacing of rapid-fire riffs, limber bass lines, and undulating acoustic notes (not to mention Farhadian’s increasingly gargantuan growl) reminds me once again of In Vain at their very best, after which the band deliver the album’s pulse-raising, progtastic pièce de résistance in the form of towering, twelve-minute closer “Sundown”.

Taking full advantage of its extended run-time, the record’s final track allows Descend all the time they need to explore the darkest metallic depths and the brightest melodic heights of their sound, ebbing and flowing between these two extremes (and occasionally embracing both simultaneously) with a sense of artistic vision and vibrant ambition well beyond the band’s years.

Of course, as good as this album is (and it really is), in hindsight it’s really only a stepping stone towards what would come next… 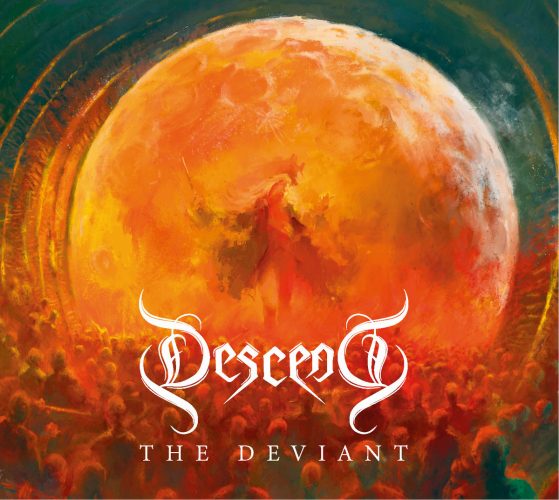 It may have taken Descend a little longer than expected to follow-up their second album but, trust me, the wait was more than worth it.

By doubling down on the proggier side of their sound, allowing greater swathes of their music room to breathe, the quintet (now featuring bassist Raul Vicente and drummer Emil Nissilä) have finally stepped outside of the shadow of their influences, and while The Deviant doesn’t necessarily break the mold entirely, it still walks its own distinct Prog-Death path.

That’s not to say there aren’t moments where the band’s sound still resembles that of their peers a little, as there are definitely occasional sections (such as the ending of “Lily”) which are redolent Opeth’s Still Life/Blackwater Park era (although the intricacy and sharpness of the band’s riffs is increasingly more Ihsahn than Akerfeldt), while the electrifying melodic fretwork of “Blood Moon” feels like something from Dark Tranquillity’s underrated Projector period taken to its proggiest extreme.

More than anything, however, I’d say that The Deviant is most comparable to last year’s phenomenal comeback album from Disillusion, particularly in the way that it plays with such a wide spectrum of melodic colours and metallic shades, all enhanced by a rich, nuanced production job which gives every shining riff, gravel-throated growl and crooning harmony the power and presence they deserve.

But, even here, Descend continue to put their own unique spin on things, particularly in the way that each track (and the album as a whole) is constructed with such a fluid and dynamic sense of flow.

Just take a listen to the way that majestic intro “Alvalin” sets the scene for “Blood Moon” and its brilliant blend of proggy ambience and focussed intensity, all of which is topped off with a spellbinding mix of scalding snarls, and visceral growls, and truly sublime clean singing (vocalist Nima Farhadian undeniably puts in the performance of his career here), which then transitions seamlessly into the moody darkness and haunting harmonies of “The Purest One” (which only grows darker and more intense as it goes on).

This in turns flows smoothly into the sombre opening bars of “Lily”, giving the listener a few moments to catch their breath before the song explodes into a powerful display of potent Prog-Death fury, equal parts hammering aggression and heart-rending atmosphere, after which the anguished artistry of “Wallow” strikes a deft balance between the extremity of Edge of Sanity and the progginess of Porcupine Tree.

Closing with the twelve-minute title track, one final showcase for both the album’s increased aggression and intensity (hitting, at times, a whole new level of heaviness for the band) and its unexpected vulnerability and versatility, The Deviant is the sort of astonishing, career-defining achievement which most bands would give their right arms for, and which more than justifies the six year wait for its appearance.