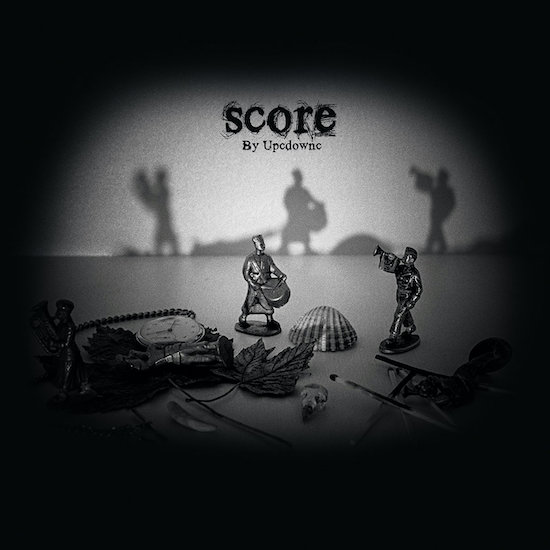 Although we believe that our site covers a pretty broad range of music, most visitors know when we’re stepping outside that range, climbing over the fences to take a look at something that lies on the other side. What’s usually inside the fences is a landscape of extreme metal, most of it with vocals that aren’t meant for tender ears, and most of it not meant for tender souls either. And to be honest, what lies on the other side is a universe of sounds far more vast than what’s inside.

It’s fair to say that we’ve climbed over those fences today — though maybe keeping one hand on the fence. Or maybe we’ve just pushed the fence a bit further out. The new album by Upcdownc that we’re premiering today definitely has connections to metal — the music does get plenty heavy, and picks its moments to make abrasive assaults on the senses. And as you’ll discover, some of the moods it channels (and there are a wide range of them) become very dark indeed.

But the album undeniably goes places we usually don’t, and for that it has become a refreshing discovery, one that’s persistently tantalizing and transportive. 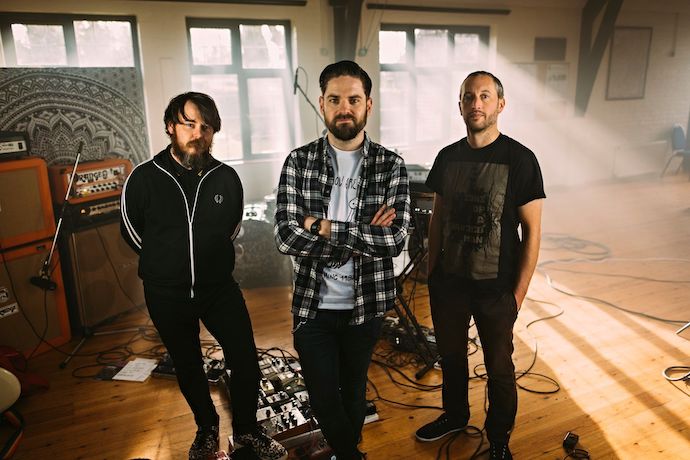 At least for this writer, it’s not merely the album that’s a new discovery, but the band as well. Never mind that Upcdownc have been making music for 20 years, the music has eluded me until now. So I’m afraid you can’t expect expert advice about how the record compares to what preceded it, or even a critic’s comparison of it to other bands who might be considered this one’s musical peers. I’m just taking it as it comes, almost out of context. But I suspect many of you will be coming at it in the same way.

The name of the album is Score, and as for what that title means, guitarist Chris Garth has said: “The concept behind the music and artwork on Score is all about looking back over our last 20 years together, trying to move forward sonically whilst paying respect to everything we’ve done. Not to give too much away, but there are many elements within the album title, song titles and music that hark back to our past.”

As for the music, there are no vocals, clean or otherwise. Genre linguists might appreciate a high-level reference to such styles as progressive rock, noise rock, and sludge, with doses of psychedelia and doom — or might benefit from “FFO” references to the likes of Swans, Black Sabbath, and Mogwai — though Chris Garth has also credited the influence of Melvins, The Jesus Lizard, Tangerine Dream, and Thou (and I might add early Pink Floyd as well).

But to delve a bit deeper….

Score proves to be a thoroughly engrossing experience because of its near-constant ebb and flow, and the masterful ways in which the band construct and deconstruct the music. They deploy a great multitude of sounds — more guitar tunings and effects than you could probably count, and a similarly broad array of synthesizer sensations (and the occasional piano melody), in addition to drum and bass performances that repeatedly do a great job getting a listener’s head moving reflexively. And they have a real knack for gradually layering all those varying sounds together, and then dramatically silencing or changing them.

The effect of what they do is a blend of many contrasts. The music is otherworldly, and it’s earthy. It’s mysterious and haunting, and it’s also troubled and calamitously destructive. It’s sublimely beautiful — often spellbindingly so — and it’s jarringly discordant. Score becomes a trip through a labyrinth of mind and mood. The longest songs on the album — “Arc” and “Cold Harbour” — are labyrinths of those kinds all by themselves. But even the shorter compositions are dynamic experiences, which themselves also make expert use of layering and of mood-altering course changes.

One of the shortest pieces, “A Conversation About Fire”, is perhaps the only track that doesn’t take you on a changing trip. It functions like a reflective interlude, built from shimmering and warbling synths, slow clean guitar, and humming bass notes. But everything else is a trip. Even the shortest piece, “Power of Three”, opens the album with a slightly raspy strummed guitar joined by glistening tonal reverberations and distant rumbling — but then heavy pounding and distorted chords swell and dominate, transforming the music into a cruel and abrasive experience. And all of the other longer songs are even more extravagantly varied.

When things get seriously heavy, it’s usually due to the incorporation of thick, heavy, sludgy riffs. They don’t surface often, but when they do, they grab attention in a big hurry. There’s a Sabbathian resonance to the one in “Arc”, and the one in “Eternals” sounds like a catastrophe in the making, while the one in “Miar” sounds like a big lumbering beast, and the deep distorted riffing in “Cold Harbour” creates a feeling of both majesty and horror. Along with it, the conjunction of all the instruments in the closing crescendo of that final track seems to portray the triumph of terror on a vast scale. It’s a breathtaking way to close the album.

But to try to catalogue all of the other sensations across the record, and to try to explain how the band create them, would be difficult, and undoubtedly less interesting than simply listening to the music. Just know that once you get deep into “Arc” there’s no turning back. The album gets you firmly in its grip during that song, and then, if you’re like me, your home would have to catch fire before you’d leave the record.

Score will be released by Trepanation Recordings on August 28th, in a limited edition CD format and on cassette tape (limited to 50 copies of each), as well as in the form of a digital download. Upcdownc will be self-releasing the album on limited-edition vinyl.