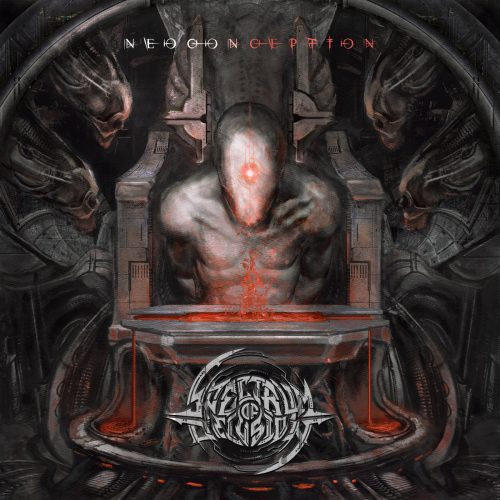 We’ve already seen, at least twice over, that the Dutch technical death metal band Spectrum of Delusion (and their film-making allies) are extremely clever when it comes to preparing videos for their forthcoming second album Neoconception.

The video they made for “Into Another Formation” is still one of my favorites of the year. The fact that it was filmed in a single take is astonishing. The fact that they were able to pull it off while having a good time is all the more impressive. And their full-band playthrough video for “Through Mankind’s True Ambition“, in which they fly like crazy across their instruments (and roar in rage) in various placid locales is an enormous kick to watch.

And now we add one more piece of audio-visual entertainment to those, as we premiere “Await the Transition“. 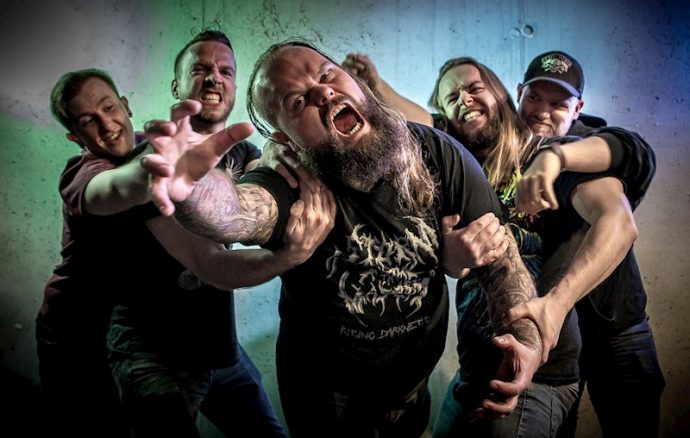 Here, the goings-on in the video are more mysterious — though not entirely devoid of humor. The appearance of the members glumly lip-syncing the vocals in the midst of mind-boggling musical riot does bring a smile, but it soon becomes apparent that they are about to be subjected to some form of electro-mechanical modification, which involves the placement upon them of strange helmets and the skewering of their craniums with electrodes — a process that begins to produce facial quivering and twitching.

The music itself produces mental quivering and twitching, and a high-voltage stimulation of the entire nervous system, but the effect is sublime in addition to electrifying. Rhythmically, the music gallops, bludgeons, and cavorts, and the growled and screamed vocals are authentically rabid –all of that will quickly make friends with your reptile brain. But your higher faculties (such as they are) will be what’s engaged by the band’s adventurous escapades with their many-stringed instruments (including a prominent fretless bass).

They do leaven the pyrotechnic shred-fest with an episode of soft mysterious ephemerality, and somehow insinuate other elements of strange, ominous, gliding melody into this head-spinning thrill-ride of a song, which is well-suited the imagery in the video. There’s a sense of a strange and dangerous transformation in progress… perhaps an assimilation into a mechanical hive-mind,,, but how it will end is still a puzzle.

We’ll give you a chance below to watch and listen to all three videos released so far, including today’s premiere, and to marvel at what the band have accomplished through their four years of work on Neoconception, which is likely to appeal to fans of such bands as Beyond Creation, Spawn of Possession, Suffocation, Obscura, Blotted Science, The Faceless, and Defeated Sanity.

The album will be released by The Artisan Era on September 11th. It features cover art by Caelan Stokkerman, known for his work with bands such as Soreption, Cattle Decapitation, Misery Index, Exocrine, and more. It also includes guest appearances by guitarist Nick Padovani (of Equipoise and Virulent Depravity) on multiple tracks, guest vocals from Disavowed and Arsebreed vocalist Robbert Kok, and several voice-over actor spots across the rcord to further elaborate the concept album’s storyline.