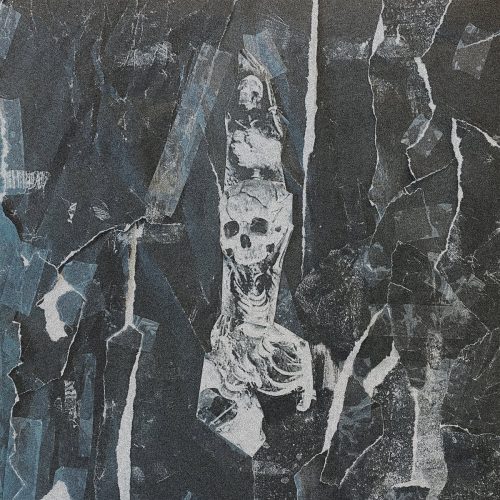 Beginning in April and continuing over a period of weeks Evaporated Sores began teasing the music of their debut album Ulcerous Dimensions by posting disturbing lines of black poetry on their Facebook page, accompanied by unsettling imagery that gave further definition to the words. The lines alone were these, in the order they appeared:

Collapse is rebirth, is death, is nothing.

A poisoned sea swallows the land.

Existence regurgitated into the void

Crushed by the weight of a billion suns.

The last of the Facebook installments, with its accompanying photo, was this one: 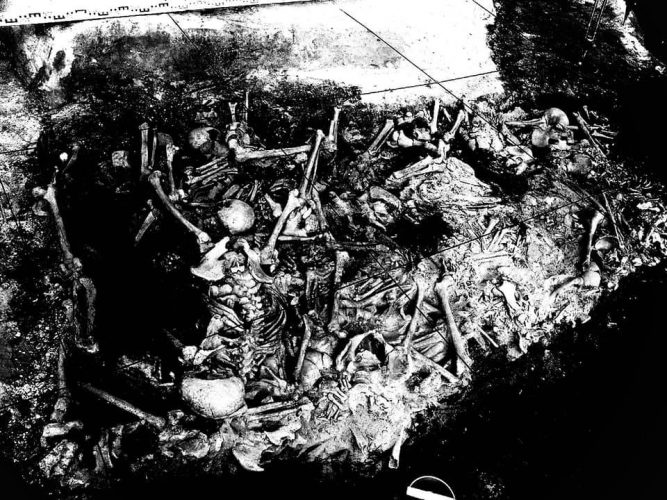 To call this perspective “bleak” is to put it mildly. To deny the truth of it depends on your own perspective, but the evidence supporting it has piled up over millennia like bones in mass graves and fly-ridden corpses rotting under the glare of countless sunrises.

The present question, however, is how the Evaporated Sores trio translated these perspectives into music. The answer, as demonstrated by the song we’re premiering today, in addition to other tracks that have previously surfaced from the album, is a fashioning of ruinous sonic abomination — visceral, ugly, and obliterating on multiple levels. In more prosaic terms, their methods consist of “suffocating death-doom metal fused with industrial noise and power electronics” (to quote the Sentient Ruin label, which will release the album next month).

The song you’ll hear for the first time today, “Rote Resurrection“, is a slaughtering amalgam of gruesomely distorted riffing, punishing drumwork, and ghastly vocal terrors — a sequencing of mental mutilation which alternates between thick, choking masses of sound, stunning thunderstorms that hit like shockwaves, and merciless, pile-driving stomps laced by demented dissonance. Weird wailing filaments of sound can be heard through the sonic savagery and suffocation, along with maniacally cavorting bass tones and rapidly changing drum patterns that both add to the aberrant nature of the music and give it added electrifying impact.

The clanging and crushing stomp-fest referred to above consumes much of the song’s second half as the vocalist issues his horrid proclamations in dictatorial and monstrous expulsions. The stomping becomes perversely hypnotic — up until the point when the brutalizing vanishes and nightmarish ambient tones have their way with what’s left of your mind.

Two other previously released tracks from the album can also be streamed below: “Regurgitated Existence” and “Claimed By Inertia” (which had its premiere at Decibel). The former is a crazed and malignant mauler, spiced by dissonant chords that spurt like blood from a neck wound, berserker leads, and demon voices from the crypt, finished off with chilling ambience. “Claimed By Inertia“, by contrast, is more in the vein of the back end of the song we’re premiering today — a catastrophic pound-fest that makes use of dissonant string torture to put your teeth on edge, but also sounds like a titanic demolition machine smashing tall buildings into rubble.

The sadistic yet ingenious talents behind Evaporated Sores are members of Filtheater, Calques, Maltheist, and Uzumaki (among dozens of other projects the members have been a part of. We’re told that they worked together by long distance, “with the instrumental section taking shape in Mississippi and focusing on the death metal skeleton of the project, vocals being added in Portland Oregon, and the industrial/noise overlays being done in Alabama via members of Calques“. 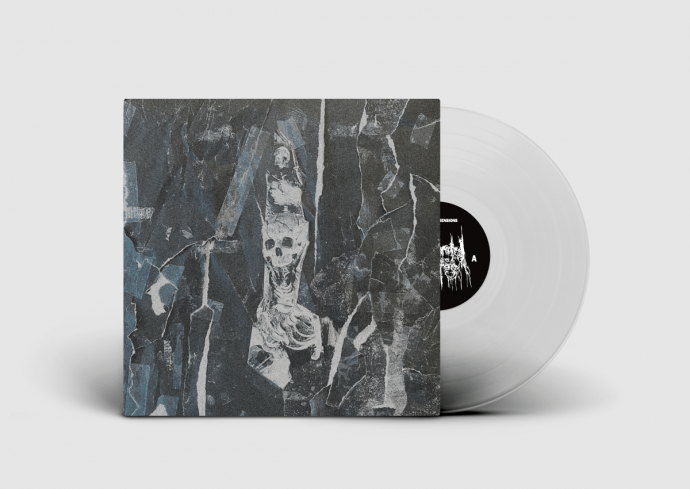 Ulcerous Dimensions will be released on September 3rd by Sentient Ruin on clear vinyl limited to 100 units (sold via direct label retail only), and on standard black vinyl, cassette, and via all digital and streaming outlets. All formats can be pre-ordered now.

One Response to “AN NCS PREMIERE: EVAPORATED SORES — “ROTE RESURRECTION””