in late March of this year the Catalonian band Morta self-released their second work, a half-hour album (or EP if you prefer) named Fúnebre. There seems to have been a very limited vinyl release accompanying the digital version, but the Portuguese label Signal Rex obviously decided that such a gripping combination of ruination and revelation shouldn’t be allowed to languish in obscurity, because Fúnebre is now set for an August 28 re-release by Signal Rex on CD and tape.

Once you hear Fúnebre — as you will be able to do at the end of this post — it’s not difficult to understand why that decision was made. The album is devoted to black metal of an undeniably rough, raw, and riotous fervency, capable of manifesting bestial terrors, but the riffing is always targeted to evoking emotional responses, and the nature of those moods may surprise you. 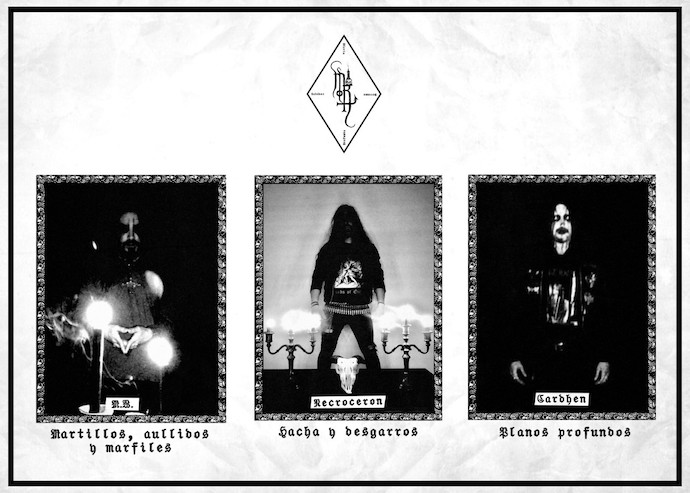 The music produces many kinds of reflexive responses. The drumming (which has a natural, “garage band” sound) is remarkably athletic and constantly changing, and those performances by themselves produce electric physical sparks (and the riffs often achieve the same pulse-pounding, head-moving effect). The vocals are simply terrorizing — so crazed and scary as to produce shivers. And the emotional quality of the riffing (which really is melodic, even if that claim might be met with skepticism, given how raw the sound seems), while strong, is shrouded in a hellish atmosphere that’s never less than frightening.

The album opens in an interesting way. The introductory track functions like you would expect many introductory tracks to do — use instrumentation that’s atypical of the main body of the record to “set the stage”. Here, “Cadáver Perenne” mixes deep droning undercurrents with glistening yet slightly degraded tones to convey a feeling that’s both funereal and frightening, both eerily entrancing and chilling. But that’s immediately followed by an even shorter track.

In “Introit Sabbat” the band conjoin a militaristic snare beat and a raw, grim, imperious riff that ends in a squall — and leads directly into the normal-sized “Sacrificio“, which is a storm of maniacal percussion and writhing, distorted chords that straddle a line between mania and mortification, coupled with horrid howling and unhinged screams. The drum rhythm segues into a gallop as the vocals segue into wild cries, and the riffing into a blaze of savage and seductive exultation. The sound is riotous (there’s that word again), the drumming a gripping display of dynamism, the changing riffs a super-heated spectacle that slashes as well as soars, the vocals a semblance of utter madness.

If anything, the riffing in “Sin Voz ni Rostro” is even more compelling. The sound is no less abrasive, the spirit of the music no less ferocious, the vocals no less extreme, but the melodies channel feelings of melancholy, of heart-felt yearning, and of beleaguered despair — which becomes increasingly desperate as the song rushes to its screaming finale — while the drumming also shifts into punk-flavor patterns.

On the other hand, “Infierno Fúnebre” is hurtling and feverish, but the melodic currents in the music create an atmosphere of horror and fear. The frenzy of the music and the unchained derangement of the vocals spawn visions of terrorizing assaults by unreasoning demonic forces, yet as always, the riffing and rhythms change, creating sensations of dervish-like ecstasy to go along with the vicious tumults.

The lights-out drum performance in “Oraculum Ab Necromantiæ” creates a feeling of chaos, and there’s a bleak urgency in the riffing, a channeling of boiling desolation and inconsolable pain. How such disturbing sensations could become mesmerizing is a mystery, but the song does indeed create a hypnotic effect, akin perhaps to becoming transfixed by scenes of shocking cruelty and horrible agony. And as the vocals veer from ugly growls into piercing shrieks, it seems as if a horde of demons have captured the room.

“Fuego y Hueso” is itself a fearsome and emotionally fracturing onslaught. The drumming, as ever, is a riveting display of speed, dynamism, and dexterity, while the guitar work leans into the sounds of both mayhem and blood-freezing infernal grandeur, with an air of the apocalypse that comes to the fore as well.

Just as the introductory track has its own unusual attractions, so too does the outro piece, “Gloria Profunda“, which combines distorted organ-like chords that apply heavy-grit sandpaper to the senses, with the corroded shine of piano keys, and together they spawn a mood that’s ominous and haunting — a requiem of sorts that’s stained with tears and ichor, and lingers in the mind maybe longer than you might wish.

As noted, Signal Rex will release the record on digipack CD and cassette tape formats, as well as digitally, on August 28. We hope you enjoy what you hear.