(For the August 2020 edition of The Synn Report, Andy Synn has decided to compile reviews of all the releases by the tremendously talented Finnish band Havukruunu, including their newest album released earlier this month by Naturmacht Productions.)

Black Metal, as we all know, comes in many different forms.

Punky and primal, proggy and polished, feral and fierce, mighty and majestic… and all shades and shapes in between.

And for this month’s Synn Report it’s the latter style I’ve chosen to focus on, with this deep dive into the discography of formidable Finnish foursome Havukruunu.

Three albums into their career (the most recent of which was released earlier this month) the band have, effectively, become masters of a scintillating brand of Black Metal which fuses the epic extravagance of their countrymen in Moonsorrow with the swaggering, riff-centric approach of Immortal and the fearless melodic mettle of Bathory… although, as accurate (maybe even a little too obvious) as those references are, I’d say that Havukruunu have more than made this sound their own at this point.

So fill your cups, sharpen your blades, and ready yourselves to ride the blazing Northern skies as we take a journey through the band’s bountiful back catalogue. 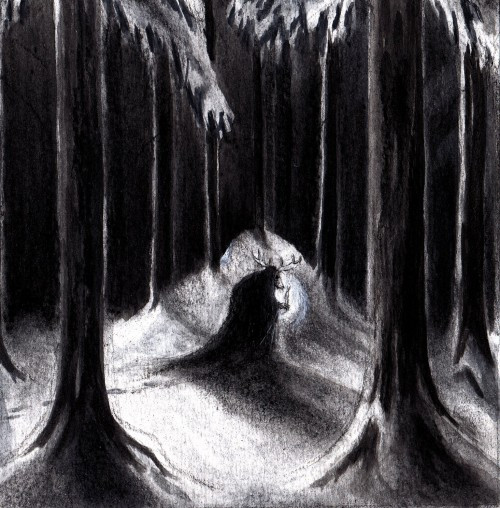 The band’s first album may be a little more rough around the edges when compared with their subsequent records, but there’s a raw energy and youthful exuberance to it all that allows the listener to (mostly) gloss over the occasional rough transition or slightly uneven song structure.

Kicking off with the rifftastic gallop of “Talven Mustat Tuulet”, whose pure energy and infectious intensity showcase not just the band’s innate grasp of Black Metal, but also their unabashed love for pure Heavy Metal in all its glory, it’s immediately apparent (especially with the benefit of hindsight) that Havukruunu had stumbled onto a sound that was truly special (particularly mid-way through the track, when the band turn the “epic” dial all the way up to 11).

“Kuvastaja” is a little darker, a little sharper, a little more blackened, with a wildness to it that can only come from the band’s channelling of their Bathory ancestry, although this is somewhat tempered by the song’s moodier and more morose second half (which also gives the bass a little time to shine).

With “Rautalintu” you start to see/hear what the band might be capable of if they were to become confident enough to fully stretch their wings and fly even higher (something which they would come to achieve soon enough).

At just over seven minutes it gives them the space they need to fully express their more heroic (and Hellenic) side, incorporating an array of audacious, semi-clean vocal parts, subtle acoustic embellishments, and an overall greater (and grander) sense of atmosphere without spiralling or sprawling into aimless excess in the process.

Of course, if something simpler and more direct is more your style, then you might enjoy the more primitive approach of “Aavevalo” (which builds to a rather magnificent conclusion) or the choppy riffs, skittering drum work, and soaring leads of “Terhen”, which adds a touch of Rotting Christ’s rhythmic ruggedness to the band’s frozen, Finnish fury

On “Sinervä” the quartet fuse a number of ostentatious, Iron Maiden-esque lead parts with a frantic blackened assault that occasionally seems in danger of tripping over its own feet. “Tuuletar”, however, is as taut as a quivering bow string, and as singularly sharp as an arrow in flight, its hyper-speed blastbeats and heroic tremolo melodies whipping up a veritable blizzard of metallic magnificence, while also showing off the group’s ever-present love of Black Metal’s primal roots in every hefty, hard-rocking riff and soaring guitar solo.

Culminating, triumphantly, with “Unien Havulinnan” – nine minutes of blazing blastbeats, shredding solos, epic vocal and tremolo melodies, and riff after riff of classic, Heavy Metal guitar work – the band’s first album certainly isn’t perfect, but you can already hear the roots of the band’s subsequent growth and obvious talent in every single track.

What a difference a few short years make. Whereas on their first album Havukruunu were still following in the footsteps of the giants who came before them, by the time Kelle Surut Soi hit the streets it was clear that the band were now standing on their shoulders instead.

There’s both a rich warmth and an icy chill to the opening of “Jo Näkyvi Pohjan Portit”, immediately immersing you in the elemental atmosphere of the record even before the thunderous, rolling kick drums, electrifying tremolo melodies, and haunting, choral cleans make their first of many appearances.

From then on, the album is a near-perfect fusion of power and melody, equal parts true grit and poetic grandeur, all delivered with an even greater level of focus and ferocity than anything found on the band’s debut.

“Vainovalkeat” is as bold and bombastic and blackened as the very best of Vintersorg, conjuring up a similar aura of primal progginess with its snarling vocals, propulsive percussion, exotic leads and folkish vocal melodies, after which “Noidanhauta” interweaves nimble acoustic notes and devilishly melodic distortion into the musical equivalent of an epic thrill-ride down the misty mountain side.

“Vainajain Valot” is a beefed-up Bathory in all but name, only relenting from its ferocious assault in the final minute or so, where it eases back to allow the listener a chance to gather their wits once again before the blackened battle hymn of “Vaeltaja” pays tribute to the fallen (and the conquered) with just under six minutes of rhythmic, swaggering riffs and inspiring harsh/clean vocal interplay.

“Myrskynkutsuja” is not only a real mouthful for any non-native Finnish speakers out there, but also a welcome return to the pulse-raising intensity and proggy creativity of the album’s early tracks, with several moments (and riffs) that recall Enslaved at their best, while still retaining that signature Havukruunu character (especially when the band cut loose with yet another magnificent guitar solo, leading into the song’s phenomenal finale).

With “Verikuu” the band double-down on the more “pure” Black Metal side of their sound, both to reassure their listener that they haven’t forgotten their roots and to build one final bout of metallic momentum as they approach the end of the album, and the track’s blending of blistering blastbeats and searing tremolo with a primarily clean-sung vocal approach, as well as just the right amount of atmosphere-enhancing keyboards, paints a vivid, visceral picture that’s both impossible to ignore and difficult to forget.

Concluding with the mythic might and melodic magic of the title track, where the band’s simple yet complex formula, balancing the proggy proclivities of early Borknagar/Vintersorg with the barbaric, blackened bite of latter-day Bathory, continues to prove itself to be more than the mere sum of its parts, Kelle Surot Soi is an absolute triumph of vision and ambition which, rightly, saw the band being spoken of in the very same breath as the legends in whose shadow they once walked.

If you thought the band’s previous album was a triumph then prepare to be blown away once again, as Uinuos Syömein Sota is somehow more epic, more heroic, more atmospheric, and more powerful, than ever before.

From the opening title track, all soaring, harmonised vocals, scorching, electrified riffs, and snarling, amplified aggression (if you’ve skipped here without reading the rest of the piece, think Tyr meets Immortal with a dash of Drudkh), to the surprising/stunning mix of galloping Trad-Metal riffs and ambient atmospherics which makes up closer “Tähti-Yö Ja Hevoiset”, this is an album which simultaneously elevates the band’s core sound while also expanding it in clever new ways.

The beating heart of “Kunnes Varjot Saa” is a thing of absolute beauty, weaving together the track’s blackened fury, folkish atmosphere, and shamelessly classic Heavy Metal-isms, with gleaming threads of glorious lead guitar melody, while “Ja Viimein On Yö” is an altogether thrashier, heavier, and more technical beast, designed to remind the listener that Havukruunu can really, and I mean really, play when they have cause to push themselves in that way.

“Pohjolan Tytär” kicks off with a killer riff that sounds like Abbath playing early Metallica, before settling into the sort of titanic, cinematic groove that Kampfar have made themselves masters of in recent years (with a similarly varied and venomous vocal performance too), leading to a back half that’s dominated by some of the most ridiculous (and ridiculously awesome) solo/lead work on the entire record, after which “Kuin Öinen Meri” pursues a pacier and more purely “blackened” approach, filled to bursting with fearsome blastbeats, ferocious vocals, and pyro-technical fretboard fireworks.

That the unexpected acoustic interlude of “Jumalten Hämär” works as well as it does comes down to two factors. One, it’s perfectly positioned to give the listener a breather right when they need it most, and two it’s clear from the multiple layers of chiming vocals, rippling strings, and subtle, atmospheric embellishments, that the band have put just as much effort into this short piece as they have the rest of the album.

All of which makes the record’s finale, in the double-header of “Vähiin Päivät Käy” – nine majestic minute of aggression and energy, mood and melody… not to mention more killer riffs and thrilling solos than your average Judas Priest album – and unexpectedly atmospheric closer “Tähti-Yö Ja Hevoiset”, even more effective, since it’s obvious the band have also paid just as much attention to the dynamic ebb and flow of music between songs as they have within them.

As good, as great, and as grandiose, as this album is, there are still hints that the best is yet to come from Havukruunu. But, for now, I wouldn’t be at all surprised to see this album dominating many a list come December. And, if you’re reading this, you shouldn’t be either.