Of the eight tracks on Vermisst‘s new album Zmierzch Stalowej Ciemności (which Signal Rex will release on September 4th, on vinyl and digitally), five of them first appeared as an EP bearing the same title as this album, released in a CD edition in January 2020. The other three are bonuses — new original tracks recorded last December which expand the EP to 40 minutes.

For those readers who may have overlooked the EP over the last eight months, it’s quite an arresting and often elaborate experience, one that featured not only the performances of Vermisst‘s core members Belath (guitar), Vorghast (vocals), and Kvalvaag (keys) but also impressive session work by Vlambré (bass), Bloodwhip (guitar), and Vulgrim (drums). The bonus tracks, created solely by Belath (guitars) and Vorghast (vocals, drums), are very different in important respects, but arresting in their own harrowing way. 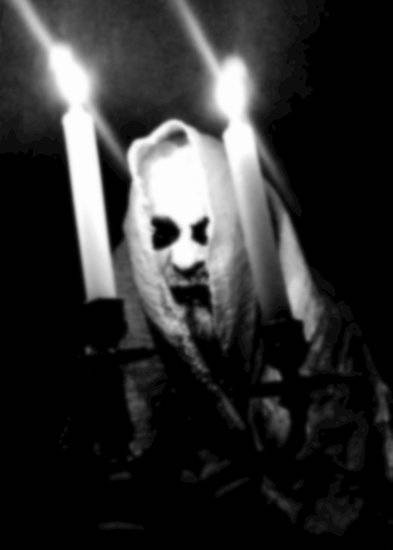 As presented on the first five tracks, which made up the original EP, this Polish group’s synth-enhanced black metal is almost always chilling, yet it chills the mind in different ways — sometimes mysteriously alien and haunting, sometimes majestically sweeping, at other times ravaging. On the other hand, the vocals are always so crazed as to be terrifying.

“Mørkelokk” is the stage-setting for the EP, combining booming, timpani-like pounding, humid and haunting droning tones, and lingering flashes of eerie, spearing shrillness. Those sensations of dread and “other-ness” reappear in the songs that follow.

The second track, “Czas Chtonicznej Zemsty”, bursts open with galloping blast-beats and harmonized riffing, delivered with a mixture of abrasion and clarity. It has a boiling urgency yet a sense of oppressive bleakness intertwined with spectral strangeness. Vorghast‘s vocals are harsh and howling, augmenting the undercurrents of peril in the song, while the high spiraling guitar leads underscore the music’s atmosphere of preternatural threat. There’s also a soaring quality in the keyboard layer that emerges, lifting the song higher into a realm of wonder, though different chord progressions send the song into a hellish inferno of deranged savagery.

The reverberating chords and sizzling backdrop of “Zamarznięte Płomienie Mizantropii” create an immediately contrasting sensation of oppressive gloom. The song slowly waltzes above the earth, its shimmering synths and stately drumbeats creating a simultaneous feeling of grandeur and dread. Both the mood and momentum of the song change as Vulgrim hammers and the guitar and synth create tension and anguish, and Vorghast‘s vocals are completely unhinged, his tortured screams sending shivers across the skin. Backed as well by full-throttle bass work and even more extravagant drum patterns, the combined effect of all this is scary but exhilarating.

The combination of brooding, growling bass notes and cascades of fiery dissonance at the outset of “W Pozagrobowej Przestrzeni” continue driving the fear factor of the album. The experience of shining synths moving in grand waves high above, on the other hand, perpetuate the feeling of supernatural awe, just as the rumbling bass and hurtling drums fire the listener’s blood. Moments of cold ambience provide a short-lived break in the music’s intensity, but the vocals are as insane as ever. In the closing movement, an atmosphere of apocalyptic despair and crushing doom descends.

As emotionally desolate as that finale to “W Pozagrobowej Przestrzeni” is, the opening of “Det Skjulte” (which closes the original EP) charts a radically different path. Mesmerizing synths float the listener on a silken sea of sound, creating a dreamlike and restful sensation. Pinging keyboard tones and pulsating electronic beats generate enlivening rhythms within the wash of shimmering, spellbinding ambience. It was (and is) an otherworldly yet seductive way to end the EP, far different from everything that comes before it.

Slow, slightly roughened chords and a backing buzz provide an effective segue for the listener into “Frozen Flames of Misanthropy”, the first of the bonus tracks, but the combination of Vorghast‘s wrenching cries and a mournful mood in the melody cast the song into the vein of depressive black metal, though there’s a yearning vibrancy in the trilling guitar chords and thumping drumbeats. Compared to the tracks from the original EP, the song is more “stripped down”, more simple in its musical textures. Yet the melodic refrains create a haunted and entrancing effect, even though the vocals war with that effect in expulsions of unbridled pain.

The primitive, lo-fi aspects and depressive moods of “Frozen Flames..” carry through into the other two bonus tracks, “Za Ducha Głębiny Zasłona” and “Zimowa Aura Krwawych Cieni”. Both of them are anchored by simple drum patterns, repeating, scratchy chord progressions, and rippling leads. The melodies, which at times become hallucinatory, channel feelings that are beseeching and barren, anxiety-ridden and despondent. As ever, the larynx-shredding intensity of Vorghast‘s vocals are downright frightening, and disturbingly abrasive. Combined with the music in these songs, they fashion images of isolation and despair, of mental and emotional breakdown.

As mentioned above, Signal Rex will release this expanded EP on 12″ vinyl, as well as digitally, and the release date is September 4th. It’s available for pre-order now, with cover art by Vorghast and Nightwolf.