(We present Andy Synn‘s review of the new album by Berlin-based Ancst, which will be released on September 18th via Lifeforce Records and the band’s own label Yehonala tapes.)

Evolution is a strange thing. For the most part it’s such a glacially slow process that its effects are almost invisible, except in hindsight. Yet it’s also extremely unpredictable, sometimes progressing in random fits and starts, or even the occasional dramatic leap, in a manner that seems to defy understanding.

Musical evolution is no different. Different bands evolve at different rates, and in different ways, especially as new members – and new musical DNA – are introduced.

But, you know what they say, “the more things change, the more they stay the same”, because while Blackened Metallic Crust-Punk crew Ancst may have cycled through quite a few members over the years (with stalwart mainman Tom S. as the band’s constant linchpin) as well as a few different sounds (their alternate, drone-based material is also well worth a listen) their third album (which is something like their 20th release overall, not counting demos and compilations) finds their sound largely unchanged and their modus operandi – big riffs, big blastbeats, and even bigger vocals – still just as intense, and just as effective, as ever. 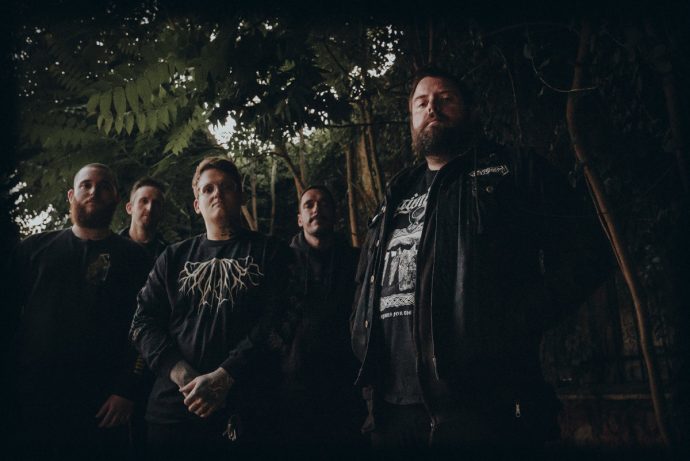 This doesn’t mean, however, that Summits of Despondency is merely a carbon-copy of its predecessor(s).

In fact, unusually, the album almost feels (for better or worse) more like a combination of two different EPs, each with a slightly (but strikingly) different focus or angle, than a totally (or tonally) cohesive piece of work – although that doesn’t stop it from delivering all the rage, riffs, and rampant blastery you could possibly ask for in a span of just over forty-four-and-a-half minutes.

If I’m being honest, however, I have to admit that I still have slightly mixed feelings about the record’s first four tracks, which seem to err more towards the chunky, Hardcore-meets-Death Metal side of things (think Minor Threat jamming with Bolt Thrower… or maybe just a crustier and more blast-happy Heaven Shall Burn circa Whatever It May Take) than ever before.

That’s not to say I don’t think the songs are good. But by stripping down their sound so much it does occasionally feel like the group have lost a little something – blistering opening duo “Kill Your Inner Cop” and “Inferno”, for example, do tend to blend together a bit – and it’s no surprise that frantic third track “Final Hour”, with its ferocious blend of power, pace, and subtle melody, is the album’s early stand out.

Thankfully my feelings about the rest of the record are much clearer, and much stronger.

From the sombre, scene-setting instrumental strains of part I of “The Burden of Hope”, all the way through to its suitably monolithic final track, the back half (or therabouts) of Summits… successfully reintegrates the more subtly blackened and mournfully melodic Post-Crust elements of the band’s sound, delivering an impressive run of killer cuts that are far more nuanced, and far more memorable, without sacrificing an ounce of intensity or integrity.

Take part II of “The Burden of Hope”, for example – whose electric tremolo melodies and atmosphere-enhancing chords help elevate the track to a whole new level – or its captivating companion “Razed Eden”, whose blend of angelic ambience and bombastic belligerence sounds like some heart-wrenching, head-banging hybrid of Alcest and Earth Crisis.

As a matter of fact I’d say all the songs in the latter two thirds have a little bit more to them which helps them stand out, from “Abysm of Existence” and its steady transition from pure, unadulterated aggression to something more epic (but no less extreme) in nature, to the razor-sharp Blackened Hardcore hooks of “…of Dying”, to the massive riffs and melodic melancholy that define “Denazification”.

Saving the best for last, of course, Summits… concludes with a pairing of its two best tracks, with “Monotony of Anguish” moving from a simmering, Post-Crust crawl to a blast ‘n’ burn, riff-heavy assault over the course of a little under five minutes, after which “Monolith” effortlessly ties together all the elements of the band’s sound – haunting ambience, doomy atmosphere, bleak melodies, shimmering soundscapes, and humongous, heavyweight riffage – into one phenomenal finale.

So while it may not be much of an evolution, let alone a revolution, in sound, there’s no denying that Summits of Despondency just gets better and better as it goes on, to the point where even my early misgivings about its beginnings have (for the most part) been washed away by the sheer metallic magic on offer during the album’s second half.

3 Responses to “ANCST: “SUMMITS OF DESPONDENCY””