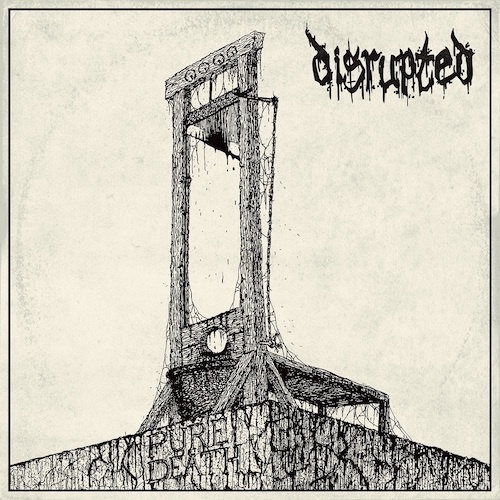 It is time for all true slaves to old-school Swedish death metal to prostrate themselves and prepare to worship. What we have for you is a track off the new album by the Swedish heavyweights Disrupted, who should be recognized as pack-leaders among the modern-day bands who have embraced the legacy of Nihilist/Entombed, Interment, Grave, and God Macabre and proudly (and savagely) carried it forward.

We’ve observed before (as have others) that this old, often-emulated style of HM-2-driven death metal horror can’t be tinkered with very much or it loses the right to claim the name. And so what addicts of the style (including this writer) are after isn’t novelty or nuance but spirit and skill, not merely devotion but the songwriting chops and executioner’s talent needed to both trigger adrenaline and stick a song in your head like a rusted, blood-caked spike.

Disrupted have become masters in those black arts, and although they don’t really need help, they’ve got some über-talented guests along with them for the hell-ride of Pure Death, which is the name of the new album — set for a CD release on October 26th by Memento Mori and for a vinyl LP release on October 9th by De:Nihil Records. 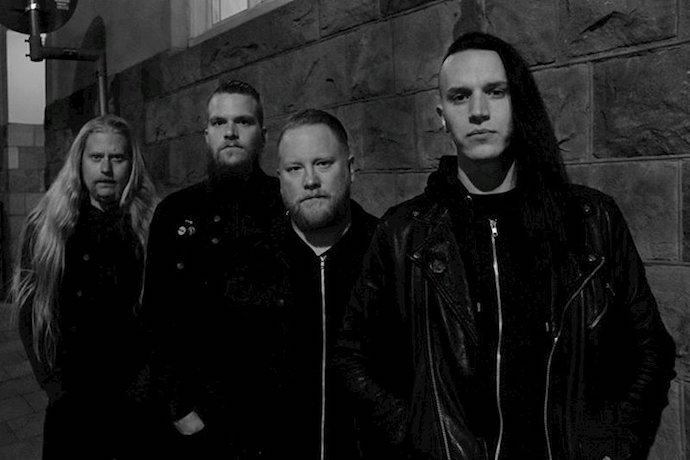 Those guests we mentioned include guitar solos by Per “Sodomizer” Eriksson (ex-Bloodbath, ex-Katatonia), Tomas Åkvik (LIK), and Mats Andersson (Wretched Fate), as well as guest vocals by none other than Nick Holmes (Paradise Lost, Bloodbath).

The track we’re premiering today, “Human Stew“, features the soloing of Per Eriksson, and the band waste no time letting him take the spotlight. Right from the beginning he delivers a wailing and wondrous guitar solo that seems to be a voice from beyond the grave, but a deliriously ecstatic one. Anchoring that burst of supernatural extravagance is a head-hammering drum beat and the mauling, meat-grinding Swedeath riffing we’ve come to know and adore. It segues from spine-shaking chugs into sensations of sinister stalking and grisly swarming, while generating an atmosphere that stinks of rot and disease.

And you’ll be delighted to discover that there’s a second guitar solo in the song, one that’s again weirdly exultant — and also moody and miserable — as well as further bouts of thuggish beating, barbaric swarming, and general earth-moving heaviness. Last but certainly not least, the vocals that accompany this rampage are spine-tingling, the kind of monstrous growling roars and maddened snarls and howls that spawn visions of some giant carnivore in a blood-lust (even though the words are very clearly enunciated).

“Human Stew” is the second track from Pure Death to be revealed so far, and we’ve included a stream of the first one (“Blood Worship“) along with today’s premiere. Credit for the simple yet evocative cover art goes to Woodcvtter Illustration. Check these links for more info about the new album and how to get your hands on it: