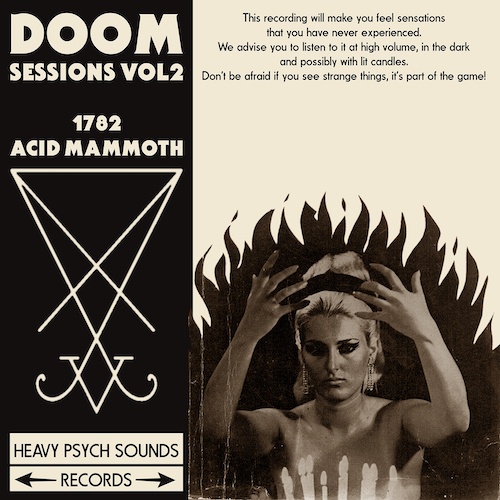 (Earlier this year the Heavy Psych Sounds label announced a series of splits called Doom Sessions, and Volume II (which will be released on September 18th) features songs by the Italian band 1782 and the Greek band Acid Mammoth. Comrade Aleks reached out to both bands with a few questions, and we present the results today, along with music from the split. Aleks‘ interview of the bands who participated in Volume 1 is here.)

Heavy Psych Sounds Records keep on providing us more of modern doom/stoner vibes, and the second volume of their series of splits named Doom Sessions is on its way. Volume 2 features Acid Mammoth from Greece and the Italian 1782. Both bands are quite fresh but they have already proved their serious attitude with full-length albums.

Once more the label’s owner Gabriel Fiori (Black Rainbows band) introduces us to these participants in the Doom Sessions, as members of both bands are going to reveal a few things behind their work. Marco Nieddu (vocals, guitars, bass) on behalf of 1782 and Chris Babalis Jr. (guitars, vocals) on behalf of Acid Mammoth bring us the folowing words from behind a quarantine curtain.

Gabriel, 1782 and Acid Mammoth represent the second volume of the Doom Sessions series. Both bands are complementing each other ideally. Which qualities do you value in them?

These two bands has been chosen as new and young figures in the doom scene, both under the sign of HPS Records, and they fit together really well because of their sound. A tour by both bands was already planned before the Covid strike, and we thought the combo represented well the new wave of doom in the scene.

Were both 1782 and Acid Mammoth your one and only choices or did you have on your mind a replacement in case someone dropped out?

The Doom Sessions project started with these two bands in mind — in fact this supposed to be the Vol 1! But while both bands went into the studio to record new and specific material for the split, this required a longer time. Conan and Deadsmoke were faster in delivering their songs, so 1782 and Acid Mammoth switched to Vol 2, so this project was born to have both bands together since the beginning.

Did you have any special requirements for the songs the bands offered for this split?

Not at all, we like to give free space to the artist. We asked a minimum of 13-15 minutes of music for each band to make the project at least of a certain length to make a 12″ vinyl. 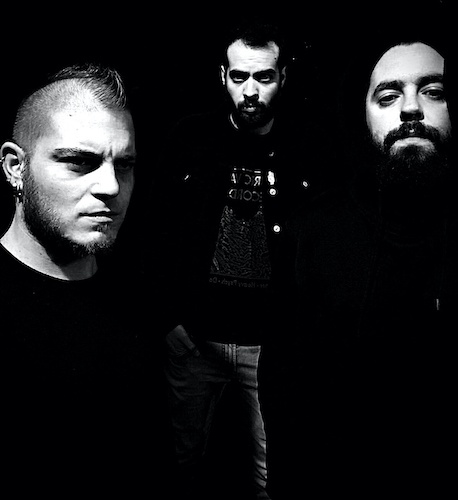 We know that this is a very popular theme, but we can tell you that it is a theme that has always attracted us, even before the band was formed. When we formed the band, we saw what kind of riffs came out, and at that point it was automatic to use those themes. Furthermore, our land, Sardinia, is full of stories and legends that have to do with witchcraft, so from this side we see it as something that belongs to us.

Were these songs recorded exclusively for Doom Sessions or did you just have some free material?

‘Bloody Ritual’ and ‘Hey Satan’ are the first two songs we composed after the release of our debut album, and ‘Witch Death Cult’ was composed by me (Marco) and Gabriele during the lockdown. In any case we didn’t write them exclusively for Doom Sessions, they just seemed like the most suitable tracks for this split album.

Are these songs connected with one story or is it just a necessary part of your doom / stoner perception?

No, they are not tied to a story but we chose three songs that more or less deal with the same themes — they were perfect for Doom Sessions. ‘Bloody Ritual’ and ‘Witch Death Cult’ are very descriptive, both tracks see a ritual as the main element, while ‘Hey Satan’ is as if we were with Satan himself and had the possibility to ask him about the things that go through our minds in that moment.

Your full-length album 1782 was released back in 2019. What kind of feedback have you received? Do you feel the motivation to continue and move the band in the same direction?

The feedback has been very positive. Since the release of the first single She Was A Witch we have been pleased to note that there are many more positive than negative ones. So yes, we want to keep the band in the same direction, obviously trying to improve more and more. I think the base of the band is quite solid, and we will have to work more on those details that then together make a difference.

As you took part in the Doom Sessions… which musical qualities does Doom personify for you?

Personally I can definitely tell you heavy riffs, slowness, fuzzy sounds, and fat drums. Keep in mind that I come from the stoner / doom branch. Gabriele (drums), for example, is from the old school branch, so it’s also important for him to be pretty rough. One thing I think is certain is that we have both branches, having different influences, and we have united them. We are very happy with what comes out.

How do you see Acid Mammoth’s tracks considering your vision of Doom?

We do a different kind of Doom, but we want to say that we really like Acid Mammoth. They are very powerful and their songs are arranged really well. We have listened to their Doom Sessions‘ songs several times and yes, they are really cool. Even though we play different Doom styles, I have to say that in the split both bands fit very well. We hope to be able to tour with them as soon as possible! 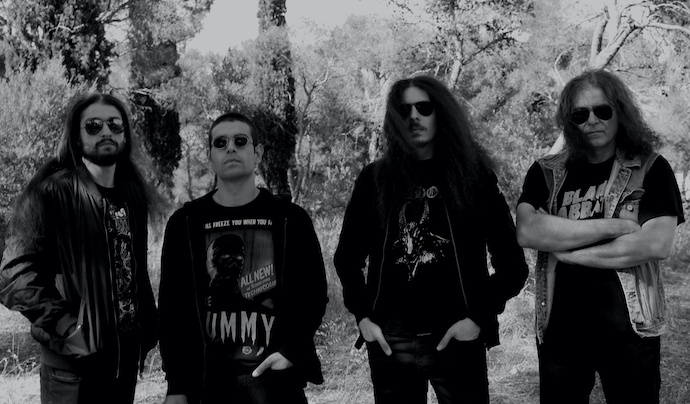 Chris, there are three new songs in Doom Sessions from your side. How long did you work over this material? Is it left over from the Under Acid Hoof session?

The three songs of the Acid Mammoth side were composed during the covid-19 quarantine and they were recorded in late spring – early summer. They are not leftovers from any previous or future releases, they were composed specifically for this release; a new chapter in the Acid Mammoth saga. We would like to think that they are like a gateway between Under Acid Hoof and our next full-length album. In the middle, like an aftermath of Under Acid Hoof or the “herald” of the next album. The three songs of Doom Sessions Vol. 2 are comprised of elements from both our two full-length albums. They have the witchy atmosphere of the debut combined with the aggressive fuzzy heaviness of Under Acid Hoof.

How do you see these songs in comparison with material from your self-titled debut? Do you see it as essential Acid Mammoth material?

We definitely see it as essential Acid Mammoth material. We’ve never had the approach of “keep the good riffs for the full-length album”. We always strive for the best possible outcome, for every release. When it comes to filler songs or filler riffs we have always had the mindset that filler fatigues the whole experience of a record, and it should better be left out. During the songwriting process, every riff and vocal should matter, while any ideas that we do not feel one hundred percent warm towards are always left off the table. We’ve never added riffs or lyrics that we did not necessarily love just to fill time in a record. We’re treating this release as we would have a full-length album.

In comparison with songs from our self-titled debut, we would say that the production is completely different, much heavier and with lots of fuzz. Also, we strongly believe that the compositions themselves are more mature. As we continue to grow as a band, I’d like to believe that at the same time we are growing as musicians.

I guess your songs ‘Black Wedding’, ‘Sleepless Malice’, and ‘Cosmic Pyres’ work perfectly together with 1782’s witchy themes both musically and conceptually.

They do work perfectly together and we do believe that we’re both on the same wave. We and 1782 started at pretty much the same time and we have quite similar aesthetics and themes, with the horror element ever-present in both bands, as well as similar lyrical themes. Musically, we would say that perhaps our sound differs. Our production is more modern while 1782 adopt a more vintage, ’70s production. Both work perfectly for each band, as well as side by side in this release. A release with 1782 and Acid Mammoth together is definitely going to be a heavy, sublime experience.

Did the Covid quarantine change your attitude towards music? How have you endured this period?

It changed in the way that the four of us couldn’t rehearse for a few months, but it did not affect the songwriting process at all. I moved for the full month of quarantine to my dad’s house, who is also the lead guitarist of the band, so we could work on music on a daily basis. Meanwhile, while apart, we were talking with the other two members of the band and exchanging music ideas all the time. Thus, Covid did not hinder songwriting at all. Quite the opposite, it gave it a big boost. It did ruin plans for live shows though, and that was a huge blow, at the very moment when our thirst to do gigs was at its highest point. We do hope that everything will return to normal as soon as possible.

What does Doom mean for you considering your musical tastes?

Slow riffs of the utmost heaviness and a dreary, witchy atmosphere, with harrowing vocals and abyssic drumming. Amp worship and huge bass lines and lots of fuzz added to the mix. Children of Black Sabbath and other ’70s titans, with Iommi’s legacy ever-present in every album or songs. Like something out of an old horror movie, a magical experience that you never want to get out of.

How do you see 1782’s tracks considering your vision of Doom?

Iommi riffs and Wizard feels all-over! We love the simplicity and overall aesthetic of it. It is what we also loved about their album, really monolithic, gloomy and dark, vintage horror, which promotes a sense of danger if you take the occult/witchery aesthetics into account. This time is like their album, but better. It gives great Wizard/Vitus vibes while at the same time it is very clear that it is 1782. This band is here to stay and it shows.

One Response to “AN NCS DOOM SESSIONS INTERVIEW: 1782 AND ACID MAMMOTH”