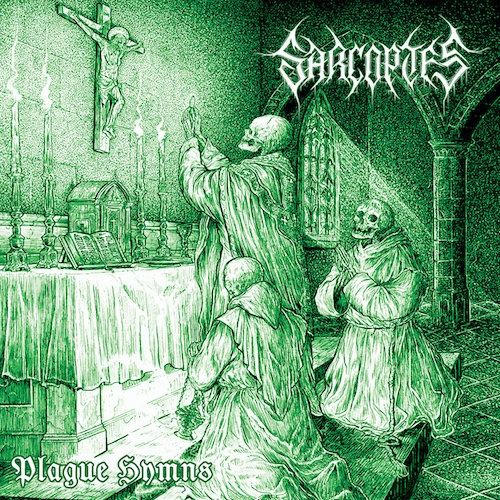 Just a bit earlier today I was writing about the special thrill that heavy metal addicts can experience when discovering a band who are adept at blending stylistic influences in unexpected ways, and in the new EP by the Sacramento-based duo Sarcoptes, entitled Plague Hymns, we have another prime example of that.

In the most brutally shorthand way of describing these two songs, they’re a fashioning of blackened thrash, but that label really under-represents how remarkable they are. They do indeed blaze like hellfire driven by gale-force winds, but they also feature beautifully chosen symphonic accents as well as the kind of glorious guitar-work that brings to mind bands from the forefront of classic heavy metal.

One immediate sign that these two songs aren’t your typical black/thrash rippers is their length: The first song, “The Vertigo Soul“, is almost seven minutes long, and the one we’re premiering today, “La Moria Grandissima” almost reaches the 11-minute mark. Both songs really are stupendous, and it’s our devilish pleasure to bring you streams of both of them in advance of the EP’s release on October 2nd by Transcending Obscurity Records. 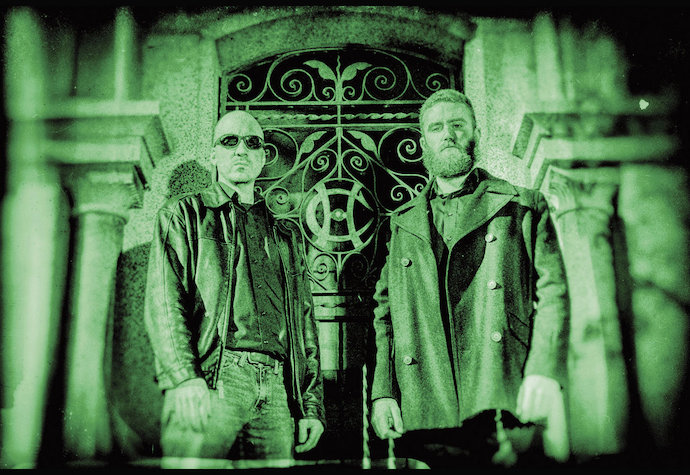 The members of Sarcoptes — guitarist, bassist, and keyboardist Sean Zimmerman and vocalist/drummer Garrett Garvey — really should be very proud of what they’ve done here. “The Vertigo Song” is pure black magic alchemy — sinister and vicious, ecstatically wild, a breathtaking, turbocharged thrill-ride through sulfurous, fire-bright nether-regions. It attacks with a blistering drum assault, extravagantly blaring riffs, and darting dual-guitar mania, overlaid by sheens of paranormal ambient sound. It further includes scorching vocal belligerence and booming, battering drumwork. But what really stands out is that hellishly glorious guitar work, which creates a rich array of flickering and rippling leads that cavort like sprites, as well as diabolical harmonies and the skittering voracious sensation of demonic feeding frenzies in the midst of possessed screams.

The monumental track we bring you today, “La Moria Grandissima“, is an immediate amalgam of grand symphonics and feverish fretwork over bullet-spitting drums. That forms the prelude to even more maniacal riffing and maddened goblin-howls. The music’s atmosphere of head-spinning dementia is leavened with a panoply of sorcerous leads and the shine of supernatural, phosphorescent majesty. Extraordinary spells are being cast at the same time as the participants in this rite are being whipped into dervishes.

The intensity and the crazed, darting ebullience of the music make it sound like bats on after-burners, flying with abandon from caverns lit by the blaze of burning souls. When the rampant, head-long flight does slow, and the drum rhythm becomes stately, there’s a hint of torment in the wailing guitars, an aroma of misery and fear seeping through the sweat. But the band put the spurs to their dragon-winged steeds and take to the skies again in a blaze of glory — only to vanish, leaving only the toll of bells in their smoking wake.

As you can tell, I like this EP a whole hell of a lot, and hope you will too. Credit for the cover art goes to Ze Burnay. Transcending Obscurity will release Plague Hymns on CD and digitally, accompanied by matching apparel. Pre-order here: