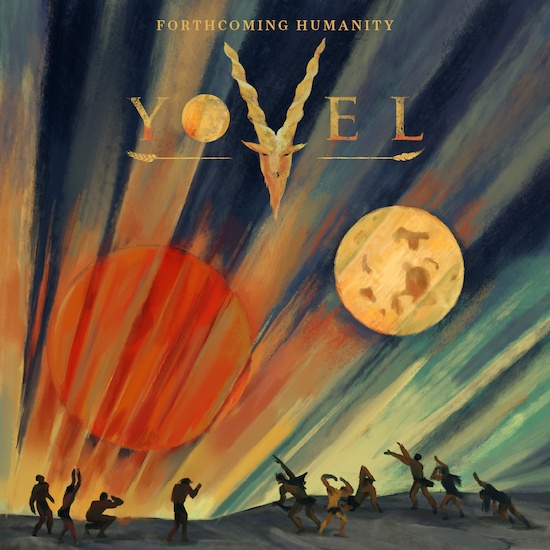 In the midst of a time when it is all too easy to feel desperate and demoralized by forces both human and viral that seem bent on crushing both life and hope, it is worth remembering that humanity has been here before. Remembering such times, and the efforts of valiant people who survived and transcended them, can itself furnish hope. And maybe we can learn something about how this is to be done, as well.

In their new album Forthcoming Humanity, the Greek black metal band Yovel have devoted themselves to such remembrances, and others. A concept album, it is based upon the poems of Tasos Leivaditis, a brilliant poet and a revolutionary, who himself lived through harrowing times, including the second World War. Born in 1922, he died in 1988. Yovel themselves explain:

“Tasos Leivaditis lived and wrote for the hopes, struggles and losses of the Greek people and Greek left movement. We found in his writing mourning; but also radiant hope, rooted in our own history but also in touch with the history of the peoples of this world and their struggles up to date. Hιs work stands as a tribute to that history, but also as a statement for our present and our future.” They quote these words of Leivaditis himself (from Confession, The Manuscripts of Autumn):

“One day I want them to write on my grave: He lived on the border of an indefinite age and died for things far away that he once saw in an un-certain dream.”

Because of the nature of the concept, and the ways in which Yovel elaborate upon it within Forthcoming Humanity, the album is far more of a challenge to write about in depth than most albums. The depths of the album itself are revealed through the booklet that accompanies it, which we have seen. Each song includes spoken-word recordings, some of them excerpts from statements of historical figures or from radio broadcasts, some of them recitals of Leivaditis‘ poetry, all of them a testament to resistance against oppression. The excerpts and some of the lyrics are included in the booklet, matching them to the musical themes and interpretations of each song. I’ve included some of the pages within this review.

Almost all of the 9 tracks begin with such spoken-word recordings, accompanied by acoustic guitar strumming and picking, though the spoken words are scattered within the songs as well. The acoustic melodies seem rooted in Greek folk traditions, and in nearly all the songs they become the basis for musical variations delivered by the full band with emotionally penetrating power. The songs become intensely evocative pieces of music, composed and performed with the same kind of passion that comes through in the writings and events that inspired them.

I’ve included thoughts about each of the songs below (mainly my own interpretation of their moods), but also want to include these further words from Yovel, which are found on the last page of the album booklet and which I think give a deeper appreciation about what motivated them to make the album:

In your hands you are holding our sophomore album; Forthcoming Humanity.

A concept album. A tribute. A conclusion. Based on the poems of Tasos Leivaditis, the brilliant poet of Revolution and Love, we tried to create a singular narrative, spanning in different times, places, struggles; with our future being the final question mark. The ultimate, obscure prize.

Basing a full album on greek revolutionary literature and narration is challenging, if not perplexing. But we had no other choice; we couldn’t see Yovel taking any other path. Because we were born and raised in Greece; the land of eternal crisis. A dot in the planet, burdened and blessed with memories of mass resistance, moments of collective happiness, mausoleums of triumphant disasters. One prominent; EAM – ELAS & the Mountain Government.

Regional, forgotten struggles of the past, some may say. Universal. Perennial. Unfulfilled, we answer.

We adhere to no nation; our homeland is “all the roads that on their side sleep; the dead of our struggle”. The roads of 1917 St. Petersburg, 1938 Barcelona, 1973 Santiago, 1994 Lacandon Jungle. The roads of Portland today. The roads that await us, amidst climate (and class) catastrophe and pandemics, emerging monstrosities and behavioral modifications. Alas, the only way forwards.

This work was a titanic task for all involved. It required everything that we had to give; and then some. We are very proud of this work – and intrigued to see if it can touch you, wherever you might be. 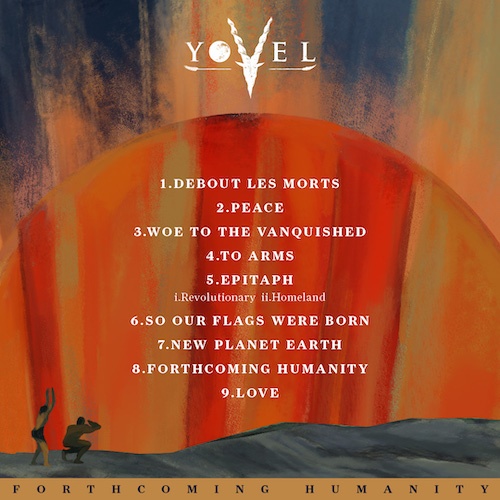 “Debout les Morts” is a wistful and mesmerizing way to begin the album, and it introduces the listener to Yovel’s theme of opening their songs with spoken words and acoustic guitar with an ethnic folk flavor. Here, that is joined by a melancholy electric guitar melody. The pulse and spirit of the music, and of the voice, quickens and subsides. Among other things, it revives a very recent memory — of the July 2019 occupation of the Paris Pantheon by the Black Vests movement — which provides a connection of the present to the past.

That track flows right into “Peace”, a fiery cavalcade of hurtling drums, pulsing bass, and blazing chords. Rebellious and defiant in its spirit, the timbre of the riffing also brings in sensations of anguish and desperation. Impassioned spoken words (from “1953’s “Winds at the World’s Crossroads) heighten the intensity of these sounds, as do the band’s unchained growls.

“Woe to the Vanquished” includes the words of Salvador Allende and Paul Robeson, and its opening acoustic melody has a lilting quality, which Yovel embellish into a harmony, and then make heavier and more gripping through the intense vibrations of tremolo’d chords, battering drums, and savage, spine-tingling vocals. While also returning to spoken words and acoustic strumming, the song reaches zeniths of intensity in which the mood is harrowing and heartfelt, beleaguered but unbending as it swings into a march.

The acoustic melody at the outset of “To Arms” is a haunting one, which Yovel once again use as the basis for weaving elaborations and adaptations. The scream of an air-raid siren announces the onset of black metal savagery in the music, a maelstrom of chaos and blood. The harsh vocals are as intense and shattering as ever, and as the song evolves the melody becomes more bleak and heart-broken, with a soulful yet stricken guitar solo helping to drive the feelings of pain.

“Epitaph” comes in two parts — “Revolutionary” and “Homeland”. The acoustic melody that begins the first part is scintillating yet sorrowful, and Yovel again create a riveting transformation, albeit without abandoning that opening melody. The swirling and darting riffs sound both feverish and forlorn, both desperate and devastated, and those sensations become powerfully immersive, transporting the listener into a time and place of turmoil and travail. The discordance of the music seems to capture the discord among people. It flares into fight, the chords blazing over galloping drums — but the band also make a softer space for a grim radio news report from another age. The music flares again in electrifying fashion, through pummeling drums and febrile fretwork that seems to soar in agony, overpowering the listener with its wrenching vitality. 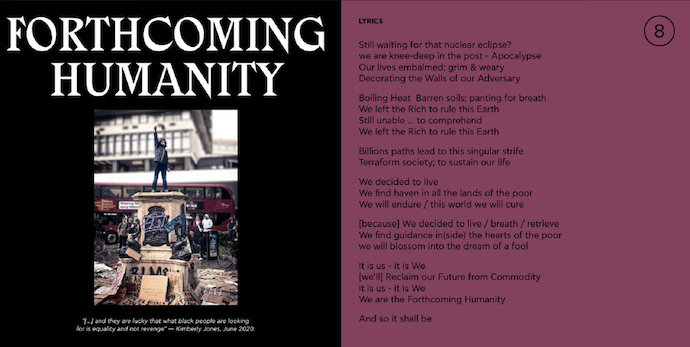 A somber, tear-stained acoustic melody, accented by piano, opens “So, our Flags were born”. The feeling of loss in the music and in the voice is palpable, and a feeling of pain builds as the electric guitar rises. When the full band come in, drums and bass pounding, chords flickering, and the vocals barking in tortured tones, the opening melody transforms, combining a sense of razor-edged despondency and fervent stridency with the soul-cleaving grief, which seems almost too much to bear, as the music translates it.

The terrible intensity of the previous song vanishes abruptly, replaced by the bright, vibrant strumming and the thumping of hand drums that opens “New Planet Earth”, accompanied by a woman’s spoken words. The liveliness of the music contrasts with the traumatic upheavals of the preceding track, but as in other instances across the album, the arrival of the full band signals variations in the foundational melody, variations that create feelings of bleakness but also intense yearning, though it’s the dancing acoustic chords and additional spoken words that end the song.

The title track stands alone on the album as the one song that’s not introduced by acoustic guitar. Instead, the full band create a fever pitch of intensity from the beginning, marrying extravagant cries, frightening snarls, blasting drums, and white-hot riffing suffused with emotionally splintering sensations of anguish. Even when the rhythm segues into a swinging march, there is such desperation in the music that it’s chilling.

And at last, the album closes with “Love”. Again introduced with acoustic picking and a spoken-word recital (“This Star Is For All of Us”), the melody channels a feeling of resilience, which of course becomes more penetrating as the full band carry the melody forward in harmony with the acoustic guitar. Yet, in that feeling of resilience, there also seems to lurk a shadow, the shadow of humanity’s constant temptation to drag itself backward.

It truly is a remarkable album, and we are privileged to bring you a full stream of it now. It will be released tomorrow, October 2nd.

6 Responses to “AN NCS ALBUM PREMIERE (AND A REVIEW): YOVEL — “FORTHCOMING HUMANITY””