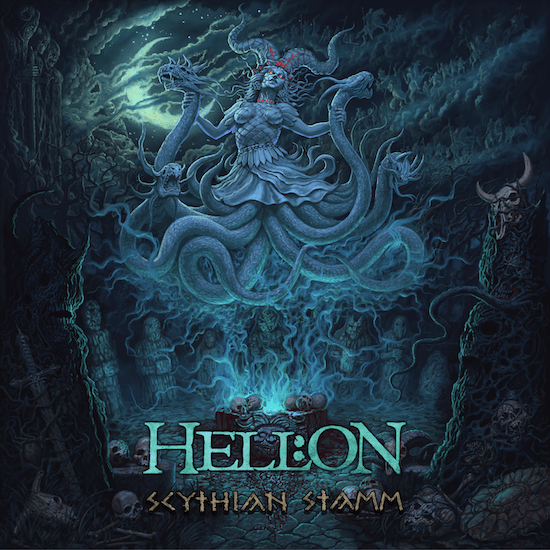 As you can see, the cover art for Hell:On‘s new album, Scythian Stamm, is spectacular. And apart from seizing the attention of the eyes (and of the viewer’s imagination), it also very well suits many aspects of the music crafted for the album by this Ukrainian death metal band. Like the artwork, the music itself generates visions of otherworldly menace and power, of monstrosity and hideous glory.

Now fifteen years into their career, Hell:On have had plenty of time to focus and hone their sound, and this new sixth album makes that clear through superior songcraft and a combination of shuddering force and mesmerizing sorcery. This much is evident even from the single song we’re premiering today in advance of the album’s release on November 1st by Hell Serpent Music. Its name is “The Architect’s Temple“. 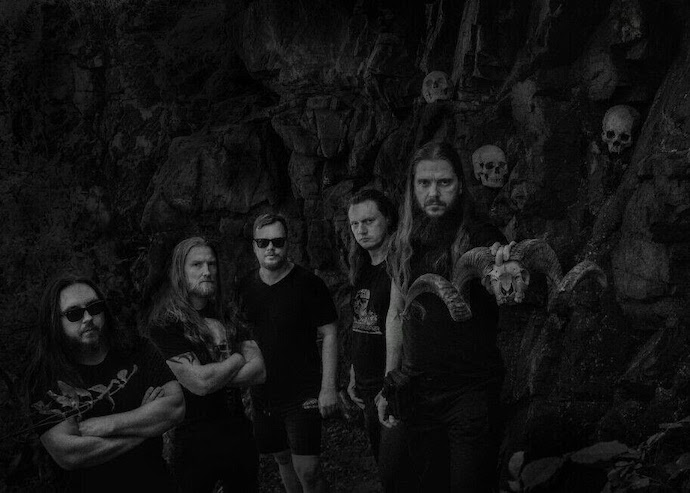 The band announce the track with a rumbling bass, methodical snare snaps, and a shining and darting melody that’s both mysterious and brazen. The song periodically leaps into pulse-pounding surges, driven fast and hard by jolting, swirling, seething riffs and bullet-spitting drum work, as the vocalist attacks in vehement, full-bodied roars.

The song is wonderfully dynamic, and thus the music also looms like an ominous tyrant, dark and dreadful, and also includes a flickering, sprite-like arpeggio that seizes attention in its own mercurial way and then becomes increasingly feverish and fiery, and increasingly desperate in its mood.

In a similar way, the song as a whole continually changes, morphing from displays of Behemoth-like menace and earthquaking power (augmented by the vocalist’s extravagant cries of fury) into spasms of maniacal destructiveness. And throughout the experience the band bring in grand melodic accents that have an arcane atmosphere, a feeling of perilous occult practices at work and of the presence of horrors from another world. All together, these ingredients make the song not only arresting in the moment, but also memorable.

(And by the way, the album’s cover art was created by one of our favorite dark artists, also from Ukraine. He goes by the name Seeming Watcher.)

“The Architect’s Temple” is being made available to listeners as a stand-alone single, together with pre-orders for the album. Get more details through the links below.

One Response to “AN NCS PREMIERE: HELL:ON — “THE ARCHITECT’S TEMPLE””