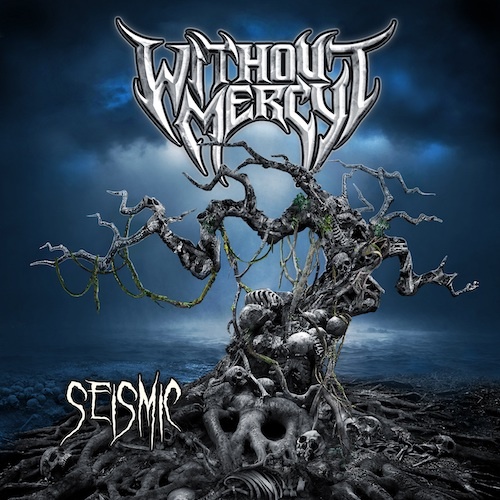 We have for you today one of those uncommon music videos that both effectively interprets and amplifies the potential messages of the song and runs the risk of making it hard to concentrate on the music. This isn’t intended as a criticism. It’s just that the video is so explosively wild and so surprisingly unnerving that you probably need a second chance to really pay attention to what you’re hearing. Fortunately, that’s an easy thing to do because the song is such a ravager on multiple levels.

That song, “Disinfect the Soul“, is a vicious and arresting track off an album named Seismic that’s set for release on November 20th by the band Without Mercy from British Columbia, who draw their inspirations from such groups as Cattle Decapitation, Meshuggah, Whitechapel, Pantera, and Decapitated. In addition to the talents of these four Canadians, the album also features guest appearances by Jeff Loomis (Arch Enemy, ex-Nevermore) and Chris Broderick (Act of Defiance, ex-Megadeth, ex-Jag Panzer), and “Disinfect the Soul” happens to be a song that features Broderick‘s eye-popping talents. 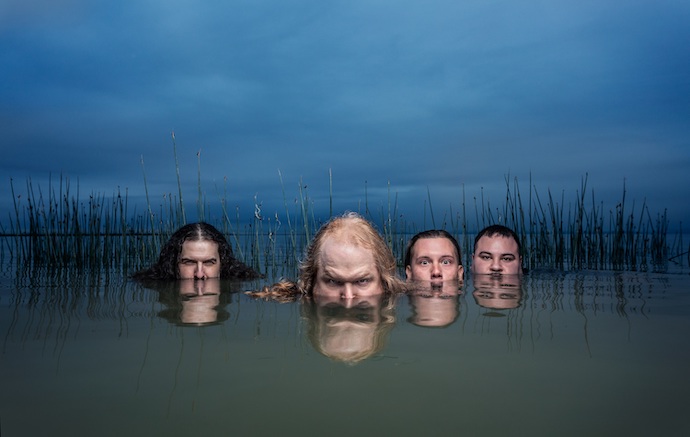 The video combines a depiction of the lyrics with imagery of vocalist Alex Friis howling, roaring, and shrieking them for all he’s worth — and he’s worth a lot. He dominates the screen from start to finish, throwing himself into the performance with such crazed, chest-baring verve that the mood changes from hilarious to creepy, frightening, and ultimately horrific before you fully grasp what’s happening. And along the way, the words give you something to ponder and decipher as well.

As for the music, it transforms too, morphing from a kind of hard-punching, hard-pulsing, fast-darting thrill-ride into an episode of freakishly ecstatic fretwork and riotous drum escapades that begins to seem more deranged than joyous, especially when the soloing becomes a hyper-speed flickering of white-hot intensity. Mercurial wisps of melody combine with brutish jackhammering riffery and off-kilter drumwork, riveting the attention and keeping you off-balance in wondering what will come next as Friis barks and screams — and what comes next is a down-shifted sequence that’s downright ominous and oppressive (and also well-calculated to pound your skull into fragments).

But the song’s changes still haven’t been exhausted. As the energy spools up again, becoming increasingly maniacal, Broderick‘s solo sends it into the stratosphere, creating a spectacle that’s both a fret-melter and a mind-exploder. But after that, as the pace dissipates again, the guitars quiver like ants squirming under the skin, creating a feeling of unnerving tension and fracturing despair. Friis screams “Blood and Guts!“… with a shotgun in his mouth….

Without Mercy have shared with us their own comments about this surprising (and surprisingly harrowing) track:

“The song features a guest solo by our good friend, Chris Broderick who ended up taking this to an entirely new level with his own interpretation of melody and context. It is one of our setlist favourites. It features a plethora of feel changes, riff changes and even a blood-curdling outro. It will make the listener question standard composition.”

And if this song whets your interest in what else is on offer through Seismic (as it well should), we’re also including below a lyric video for the record’s, first single “The Disaster“. Seismic is available for pre-save and pre-order now:

3 Responses to “AN NCS VIDEO PREMIERE: WITHOUT MERCY — “DISINFECT THE SOUL””